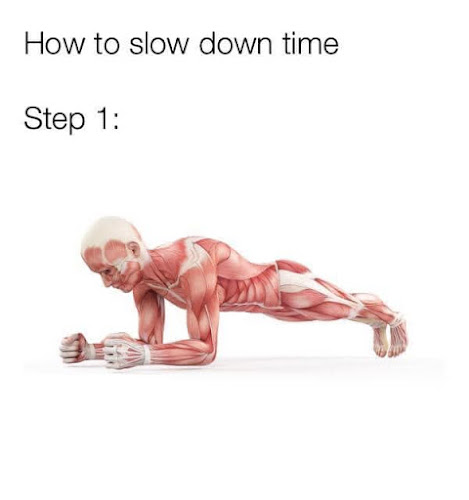 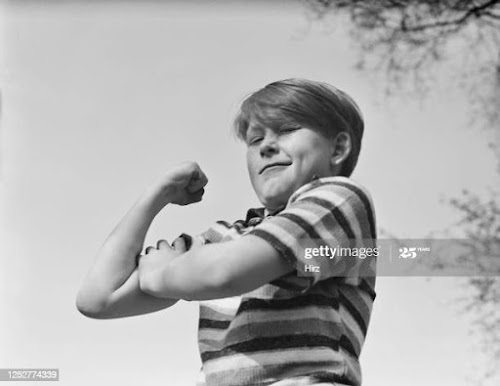 The  similitudes associated with large biceps development are as limitless as the imagination. The biceps has always been associated with great strength and muscular development. Even small children will gleefully flex their tiny biceps when asked to "show me your muscles!"

The biceps muscle fibers are arranged in fusiform fashion. In other words the fibers run parallel to the line-of-pull; this type of fiber arrangement is capable of producing little force but a larger range of motion. 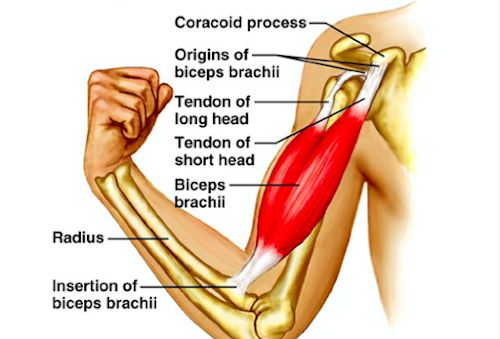 From a biomechanical point of view, the biceps is classified as a third class lever because of its axis of rotation around the elbow joint. The farther away the biceps insertion is from the elbow joint, the greater the possible force production.

This situation was graphically illustrated years ago when Franco Columbu was able to beat out the much larger Arnold in a curling contest. While Arnold's biceps were undeniably bigger than the diminutive Columbu's were, Franco had better leverage factors in his upper arm, and therefore, was able to curl a greater weight, pound for pound. These leverage factors are determined by heredity, and not subject to change.

Another genetic factor related to biceps development is the number of muscle fibers possessed by an individual in the biceps. A large number of fibers usually presents an appearance of a full muscle belly, couple with a short tendon insertion; such a biceps is most conducive to the acquisition of huge muscle size.

It should be understood at this point that even without favorable genetics, reasonably good biceps can be developed. Muscle size is based on the cross-sectional thickness of muscle fibers; intense exercise favors the synthesis of contractile proteins in the muscle (actin and myosin) which in turn thicken these muscle fibers - a process called muscle hypertrophy.

The biceps has two main functions:

1) the long head brings the forearm up to meet the upper arm (as in a curling motion), a process called flexion; and


This two-fold biceps function has important implications for proper training: for more complete development it is best to emphasize both biceps functions. In actual practice, this can be accomplished easily through the use of a variety of dumbbell movements.

The Importance of Proper Exercise Technique

The biceps is a relatively small muscle which requires strict attention to proper form for full development. The key to acquiring superior biceps lies in properly isolating the muscle. Poor technique such as using excessive momentum to lift the weight transfers the exercise stress from the biceps to the larger surrounding muscle groups; this negates much of the benefits, often resulting in slow gains.

In addition, excessive momentum activates fewer biceps muscle fibers, leading to decreased strength gains and consequent lack of muscular size increases. Your biceps has no way of knowing exactly how much weight you are lifting; it can only sense the amount of applied tension - a factor mitigated by sloppy form.

Other important techniques to help you achieve maximal biceps mass include the following:

Full range exercise works more of a muscle due to the physiological formula: work = force x distance. This means that a muscle which moves a weight over a complete range of motion is performing more work than a partial movement done with the same weight. In short, full range movements work more of the muscle. A slight pause at both the start and finish position of a curl will help to insure that full range movement is being utilized.

A pre-stretch is a slight stretch done at the start of an exercise. This pre-stretch increases the efficiency of muscle force production through mechanisms which store energy in the muscle (elastic energy) and a better line-up of the muscle contractile proteins, actin an myosin.

An example of a pre-stretch is the incline dumbbell curl performed with the elbows extending further back along the line of the torso; the stretch is very evident, no doubt accounting for the popularity of the exercise among many top bodybuilders.

Always attempt to add either weight or reps at regular intervals - but not at the expense of proper form. Too much weight added too soon will often result in injury. Conversely, not attempting to add weight when you can do so in good form will lead to lack of progress.

Muscular growth is dependent on overload; this means that a muscle will not change unless it is gently coaxed to do so through added weight, reps or less rest time between sets. Any unusual stress on the muscle forces the muscle to compensate by increasing its size or strength.

In order to prevent injuries due to excessive weight increases, it is best not to increase weight resistance (weight used) by more than 5% per week.

Many bodybuilders are unaware of the fact that muscles grow during rest; exercise merely provides the stimulus for growth. The optimum rest time for biceps is estimated to be about 72 hours; after 96 hours, a loss of strength or about 5% per week can occur.

5) Work the muscle both ways.

The cardinal symptom of overtraining is lack of progress. The biceps are easy muscles to overtrain because of their comparatively small size relative to legs or back. Back training indirectly works biceps, so doing a large amount of back training coupled with a high number of sets for biceps will almost always lead to overtraining in most bodybuilders.

Regardless of what you may have read or heard, the majority of top bodybuilders perform no more than 10-12 sets for biceps, except under special circumstances. The author has trained with Arnold during the height of his bodybuilding career and can verify that he did an average of only 8-10 sets total for biceps, not the 20-30 sets reported in some publications.

The odds are that if you are training your biceps with intensity, you will not be able to do more than 12 sets for this muscle; any more than this and your pump will disappear faster than a politician's promise.

When doing any of the following exercises, it is vital to concentrate fully on the biceps muscle. This concentration insures an important mind/body linkage which will enable you to work the muscle more intensely.

It is also important to perform one or two light sets with higher reps to fully warm up the muscle.

The chief benefit of variety lies in its inherent mental stimulation, i.e., "newness," coupled with a slight angular change which may affect neuromuscular patters resulting in added growth.

With that in mind, here are the best basic biceps exercises:

Barbell Curl.
It is important to keep the elbows stationary when doing barbell curls. Moving the elbows upward when the bar is in the contracted (flexed) position puts slightly greater emphasis on the long head of the biceps (which also assists in forward shoulder motion). Too great a motion of this kind will merely shift the concentration of this exercise from the biceps to the front deltoid.

Past experts have advised bodybuilders to vary their grips, i.e. wide, medium, and close. It was thought that such varying grips would "work different sections of the biceps." Since we know that the biceps long head is mainly responsible for the curling motion, while the short head assists in this motion (but is mainly involved in supination), or turning the hand, the fallacy of varying grips readily becomes apparent. The danger of these varied grips lies in the fact that extreme angles, such as elbows in with hands held wide, puts unusual stress on the elbow joint which may lead to injuries such as tendinitis.

The natural plane of the biceps muscle involves a curl with the elbows directly in line with the torso when performing barbell curls. A variation of barbell curls used by some is cheat curls. The exercise usually involves a shorter range of motion than regular barbell curls. The arms remain partially flexed throughout the exercise; this eventually can lead to shorter biceps muscles which hinder full elbow extension and increase injury potential. This shortened muscle condition, by the way, is what "muscle-bound" really means. Cheat curls can also be dangerous to the lower back if excessive back bending is used. Also, handling overly large poundages in cheat curls can lead to a sweet bicep tendon tear at the elbow, if that's your goal. Be careful, don't be a bozo.

A momentary pause in the contracted position of any type of curl will provide a brief static contraction at the point of near maximum contact between muscle contractile proteins which may provide an effective stimulus for added strength development.

This type of curl is especially beneficial for people with lower back problems who find that barbell curls tend to strain their backs. This is a superb isolation exercise, and by varying the angle of the curling bench you can emphasize different areas of the biceps, i.e. upper or lower. For example, by doing your curls on the straight edge of the bench you will be doing a 90-degree angle curl, which has a great peaking effect on the biceps. The regular, or sloped side of the bench places the primary stress on the lower part of the muscle.

This exercise can be performed with a regular straight barbell, dumbbells, EZ curl bar, or on a pulley apparatus. The pulley is very effective at putting stress on the biceps in the contracted or finishing position of the curl; this is often difficult to achieve with a barbell unless you do the 90-degree curl mentioned earlier.

As stated earlier, in order to fully develop the biceps, you must include supinating motion - this can only be done effectively with dumbbells.

Start the curl with the dumbbells hanging at your side, with the palms of the hands facing your thighs. As you curl, in one smooth motion, turn the palms up - this is supination. Bring your body into the curl as your arms come up; this will insure constant tension on the muscle. This exercise can also be done alternately, standing, or sitting.

This is the peak contraction exercise par excellence for the biceps. Primarily, it stresses the short head of the biceps and the brachialis - a small muscle adjacent to the biceps which assists in the curling motion. Concentration curls can be done seated with the elbow braced into the inner thigh area, or performed standing, bent over with the weight hanging freely.

Remember to supinate smoothly as you curl, and don't let the weight travel in or out - curl in a straight line. Leaning back as you curl will also offset much of the great peaking effect of the exercise.

One Arm Standing Pulley Curl.
Similar in effect to concentration curls, there is an unfortunate tendency to turn this exercise into a pectoral exercise by using poor form.

These machine-type can inject some variety in routines, with a minimum danger of injury, so use them if you have them available. Just don't expect any "magic" from them, regardless of what the hype might say.

If your biceps training has been in a rut, you may find the following potpourri of ideas helpful:

1) Switch Your Exercises - Do curls at different angles, on different equipment etc.

2) Cut down on the number of sets - Overenthusiastic training leads to a loss of muscle size.

5) Use burns - short, partial reps - after your regular reps; breakdown sets - taking a few pounds off the bar every couple of reps; compound sets - performing two biceps exercises consecutively with no rest; forced reps - having a partner assist you in grinding out a few more intense reps after you've already reached the failure point; "21s" - 7 reps in the curl from top position to halfway down, then another 7 from bottom position to halfway up, and finally 7 full reps, after which you will probably quietly lie down and die for a while; supersets - alternating a biceps exercise with a triceps exercise nonstop; or train biceps and triceps on alternate days.