I'm very happy to see this one again after four decades! 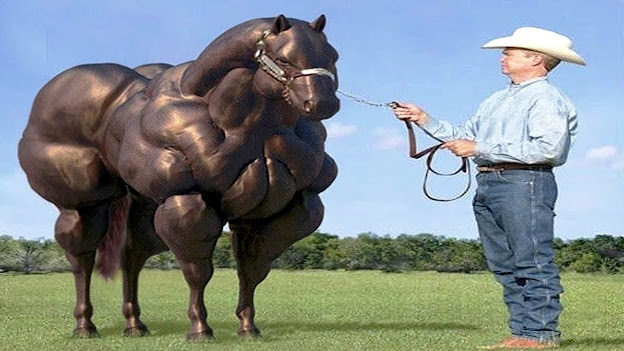 How 4 Mr. Universe Champions
BLITZ THEIR LEGS
"by" Joe Weider 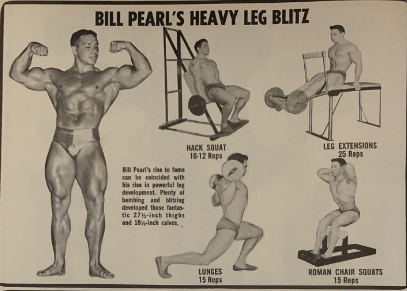 Bill Pearl's Heavy Leg Blitz
Bill Pearl, who is one of the most massively constructed men in the world, calls the thighs the "trigger" muscles of bodybuilding and says that he made the mistake of working only his upper body for years until he realized that he was getting next to nowhere. Whereupon he began to work his legs very hard he immediately noticed a heartening weight gain. Today he has one of the most Herculean physiques in the muscle world.
Working his legs extra hard educated Bill's metabolism to the process of building muscle tissue, so that his upper body exercises became just that much more effective.
Bill has followed every advanced exercise principle ever devised, and he has developed a consummate knowledge of just what works best for his own personal muscular and makeup and his individual temperament.
Bill says that to neglect the strongest muscle group of the body, the legs, will deter you from ever attaining your ultimate development and strength.
Here are the exercises that make up one of Bill Pearl's favorite routines.
Hack Squats: For developing the essential lower thigh and giving the overall thigh a terrific pump.
Leg Extensions: Unparalleled for producing the utmost in thigh separation and cutup definition.
Roman Chair Squats: A very special exercise which produces a giant pump and sharp definition at the same time.
Forward Lunges (with bar across shoulders): This movement is excellent for strengthening the thigh muscle insertions just above the knee. The stronger the insertions, the more weight can be handled in regular squats and other strenuous leg exercises.
Bill's Techniques for His Leg Blitz Exercises
Hack Squats: This may be done on the 45 degree hack machine, or with a barbell held behind the buttocks, the feet being on the floor, the head attached at the neck, and the heels raised on a wooden block. Just keep the weight at full downward stretch of the arms behind you, and with the feet 12-18 inches apart, push upward and straighten the legs from a parallel position. 10-12 reps for this.
Leg Extensions: These are performed slowly and with concentration. The weight isn't as important as the correct performance of the exercise. Bill advances the repetitions to 25 for this movement. When you raise your legs so that they are parallel to the floor, hold for a second and tense your thighs strongly before returning to the starting position.
Note: If that hold and contract strongly at the top thing seems to be giving your knee or knees grief, don't do it. The joke about "Doc, it hurts when I do this" comes to mind.
Roman Chair Squats: This requires a special machine [of course you can rig something up] and you'll find . . . exercise equipment plug here . . . Stand with hands clasped behind the head and sink down until your thighs are parallel to the floor, being sure to keep your body upright throughout the descent and ascent. 15 repetitions for this one.
Note: Be careful with thigh exercises that lock your legs in place and exert pressure on the backs of the knees.
Forward lunges: Begin with the barbell held across the back of your shoulders, as if you were preparing for a regular high bar squat. Your feet should be about 12 inches apart. Step forward with one foot as far in front of you as possible. Keep the rear leg locked so that the entire leg is straight and gets a good stretch. Lunge out with the same foot for 15 repetitions, then change position and lunge for 15 reps with the other foot.

Dave Draper's Leg Blitz
Dave Draper, whose upper body is so fantastic as to stun the mind, made the same mistake as Bill Pearl . . . thinking that a massive upper body was the be-all and end-all of bodybuilding. He worked his upper body very hard for years and built himself to the point where he weighed 215 pounds, with 18" arms and a 48" chest. Unfortunately his upper body magnificence was offset by a pair of 22.5" thighs which looked like toothpicks compared to the massiveness of his torso.
Hey, here's a good place to say, Thanks, Dave! For all the workouts you inspired, and all that positive energy you continue to spread throughout the lifting community. Good On Ya! 'Cause really, you've laid a whole lot of Good on a whole lot of people.
Dave realized his mistake and began working his legs like a fiend . . . blasting away with giant sets in such exercises as leg presses, full squats, bench squats . . . using colossal weights for a bodybuilder.
Here is a sample Dave Draper giant set leg routine.
Leg Press: Since this is a supine exercise, the upper body is not required to support a heavy barbell, hence more weight can be used with greater resistance to the thighs. 15 reps for this one.
Full Squats: Dave is one of the few bodybuilders who still practice this granddaddy of all extra-heavy leg exercises. He credits it with building the greater mass of his tremendous leg bulk. He does 8-10 reps usually, but often increases the weight for a maximum of only 5-7 repetitions.
Bench Squats: This is a safe way to do parallel squats with a very heavy weight. By using the bench as a gauge, it is possible to be sure of hitting the same depth every rep, and knowing the bench is there gives you a lot of confidence as well. The buttocks do not "sit" on the bench at the bottom of the movement . . . just touch it briefly and the ascent is then made almost immediately in order to keep the tension on the thighs. Note: this is not a box squat. 10 reps in this movement.
Sissy Squats: He performs sissy squats for as many repetitions as his energy will allow. Arch backward somewhat, and maintaining this slightly angular stance, rapidly squat to a below parallel position and just as quickly return to the top. This continuous tension causes a tremendous pump and burns away fatty tissue between the muscles.
Now, here's how Giant Sets are done.
You choose anywhere from four to eight exercises (for the legs or any other body part), different exercises. You then perform just one set of each exercise in rotation, not pausing for a moment between the different exercises. When you have completed one set of each exercise, without a pause between the exercises, this constitutes one giant set. You then rest for three minutes, and continue in the same manner for as many giant sets as your energy will permit. You must not perform a giant set for any other body part during that workout.
Note: That example . . . leg press to full squat to bench squat to sissy squat in those reps. I don't quite understand. What have I done to this author that has made him dislike me so much. To want to bring this kind of pain to poor ole me? That is one KILLER quad workout!

Harold Poole's Leg Blitz Routine
Harold Poole never had a "toothpick leg" problem, as he was a champion athlete in many sports prior to taking up bodybuilding. His leg development has always been excellent, therefore.
Harold has frequently stated that full squats built most of his thigh bulk. But he realized that bulk alone is meaningless, and that he had to have cuts and shape to be a champion, so he went on a leg blasting program, using every exercise in the book, and adding to this he went in for lots of track and wrestling. As a result he developed fantastically defined and shaped thighs.
Harold has never needed to giant set his legs, and so the routines that others follow have not had the same importance to him. Still, he faithfully exercises his legs in his split routines. He works the entire upper body on Mon/Wed/Fri, and his legs and abs on Tues/Thurs/Sat.
His legs are done in supersets as follows.
Parallel Squat, 6 x 12 reps
superset with
Leg Extension, 6 x 15.
Leg Curl, 6 x 12
superset with
Roman Chair Squat, 6 x 12.

Larry Squat's Thigh Blitz
As a gymnast of note, Larry Scott has never really had a leg problem. Since high school days his legs have always been quite muscular, although, of course they did not have the size and impressiveness that have since won him numerous bodybuilding titles.
So Larry has really only needed to bulk up his thighs and at the same time chisel the fabulous deep cuts which his audiences find breathtaking. His routines use many different training methods and he has used them all. He prefers to work his upper body on three alternate days and do leg work on the intervening days for six workouts per week. He often favors these exercises, done in two supersets:
Leg Press - heaviest possible weight, 12-15 reps
superset with
Leg Extension - done in a very concentrated way, slowly, with a definite pause as the legs reach parallel position. Here he makes a strong tension of the thigh muscles at the knees until he sees every cut coming strongly out. [Note: see note above for notable safety note]
Jefferson Lift - Larry blasts his legs with this time-honored movement. It is a strenuous exercise that builds little bulk because of the necessity of clasping the heavy barbell in the hands-hanging position. But it has the virtue of being one of the best tendon/ligament strengtheners. Tension is constant on the thighs from beginning to end of this exercise, and deep lying muscle fibers are attacked as they are in no other leg exercise. By strengthening the tendons and ligaments it is possible to use continually heavier weight in all other leg exercises, thereby assuring a bulking progress that would not be possible in any other way.
superset with
Leg Curl - Larry regards this movement as being just as essential for the thigh biceps as curls are for the biceps. Slowly pull the weight upward until the legs are perpendicular to the floor and hold there . . . tense the thigh biceps as much as possible and return to the start position.
Why Heavy Leg Work is for You
If you are in a hurry to gain weight there is no faster way of doing it than with a combination of good nutrition and heavy leg work. Work your legs first in any general program when specializing on them, or use a split routine allowing you to focus on your legs with more intensity.
As a basic leg training program I suggest that you select two or three exercises from the following list and train with them on three alternate days per week. Always do a few sets or warmup bodyweight squats to get the thigh muscles primed for the action to follow. You will find that all of these are effective:
Full Squat
Leg Press
Bench Squat
Leg Curl/Leg Extension superset
Front Squat
Hack Squat
The metabolic stimulation of heavy leg work has worked wonders in many diverse cases throughout the history of the Iron Game. So you see, a legs first approach bodybuilding can work miracles in developing the muscle you desire. Leg work builds power, size, muscularity and bodyweight . . . so GO TO IT.
Enjoy Your Lifting!