A Big THANK YOU to Liam Tweed
for this two part article! 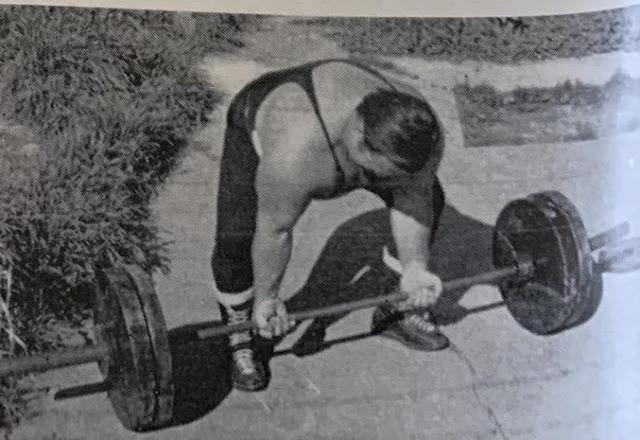 Part One: Tips on Curling

The curl has always been used extensively in the barbell routine. Many variations of this outstanding arm exercise are used by the modern bodybuilder to promote maximum muscular bulk on the upper arms.

The beginner, when first commencing barbell training, should devote the major part of his curling to the regular two hands barbell curl as it is this basic arm exercise that will assist in laying the foundation that will later be transformed, with specialization, into a fully developed upper arm.

Although the biceps forms the smaller part of the upper arm it remains necessary to develop this muscle to its fullest extent so as to give the arm overall proportion. This is imperative from the standpoint of both appearance, and possibly even more important, strength.

The curl is comparatively simple compared to other barbell exercises in regard to technique and energy output. You might say, with tongue in cheek, that this is partially the reason for the curl's great popularity as an exercise.

However, there are several important points regarding the execution of the curl, that if correctly incorporated into performance of this exercise, will promote both maximum size and strength to the muscles so influenced.

Shoes -  The wearing of any type of training shoes with elevated heels tends to throw the upper body forward when performing the curl movement. This faulty body position creates unfavorable leverage as the bar is positioned a greater distance out from the front of the body during the crucial phase of the curl.

Training Bar - If the trainee has access to a regulation revolving bar, so much the better. A hollow metal sleeve, such as advertised by the majority of barbell distributors, when placed over the regular bar will reduce friction as the bar turns and thus aid overall efficiency.

It is important that the bar is straight possible, as a bent one impairs both the grip and correct leverage If your present bar is bent, even slightly (this can be ascertained by slowly turning the bar within the plates as it lies on the floor), it can easily be straightened by hitting it soundly with a heavy piece of wood where the bend is at its highest point.

A good handgrip is highly important when curling. Leverage is lost if the bar slips downward from its position in the palms of the hands toward the ends of the fingers as the bar is then at a greater distance away from the body at the different stages of the curl. Therefore, less weight can be used. This impedes the development of strength and muscle size.

Knurled handgrips assist in gripping and are standard on all regulation lifting bars, revolving sleeves and most exercise bars. Magnesium chalk powder also improves the handgrip, especially when they are sweating.

Collars - The outside collars should always be attached when performing heavy or limit curls. One arm is usually stronger than the other, which causes the bar to be curled unevenly. This will cause the barbell plates to shift outward towards the end of the bar, throwing added weight on one arm. A limit lift usually fails because of this.

The bar can be rested on a pair of safety boxes. The original purpose of these boxes is to allow a safe recovery when squatting or bench pressing when the trainee is incapable of completing a repetition and is in the extreme low position. In a future article I will explain in detail the uses of these safety boxes in the training routine.

When curling, I have found it convenient to set the bar on these boxes; this saves time and energy as it is not necessary to lift the bar from the floor to the starting position of the curl at the commencement of each set.

Naturally the hand spacing will vary with the individual, so to find the gripping distance that is suitable lift the bar from the floor (or stands) to the starting position of the curl, and then adjust the grip spacing until the hands are almost in contact with the outsides of the upper thighs. Unless the trainee has unusually small hips, the arms, when completely extended and in the start  position, will be at right angles with the floor. This is the most favorable position for maximum curling leverage and efficiency.

Never attempt a curl while using the thumbless grip (thumbs on the same side of the bar as fingers), as this detracts from curling efficiency. Always use the thumbs-around grip and make sure the bar is solidly in the hands and positioned as close to the wrists as possible. The closer the bar is to the wrists the better the curling leverage, as the bar is nearer to the body at the critical halfway phase of the curling movement. This minimizes upper body layback to counteract the weight of the bar.

Step forward to the middle of the bar so that the fronts of the ankles are almost touching (if the bar is resting on boxes the fronts of the thighs should almost be in contact). The feet should be spaced approximately 15 inches apart (measured from the insides of the heels) and pointing slightly outward. Next, take the correct grip and hand spacing. Inhale just before lifting the bar to the starting position of the curl (it is not necessary to take a maximum breath). From this point (while maintaining the breath) the bar is immediately curled to the shoulders, as the grip and arms tend to tire very quickly in the starting position when using heavy or limit weights.

Make sure that the legs are completely extended and the thighs locked (knees forced back) before commencing to curl, as this will help eliminate backbending during the curling movement.

Sufficient speed (explosive power) is an absolute necessity when curling limit poundages. The faster the bar is started from its stationary position the easier it will pass through the difficult halfway (sticking point) of the curl. Moreover, the greater the curling speed the less tendency there is to backbend.

Strive to keep the elbows well in at the sides throughout the complete curling movement. The arms and elbows when in this position increase curling efficiency.

Do not exhale until the bar has passed through the dangerous halfway point of the curl. Exhaling during the difficult stage of any lift, especially a limit attempt, is hazardous and will usually cause a failure.

I have found that a series of sets of low repetitions combined with a limited amount of heavy singles will develop the greatest curling strength.

Load the bar to a poundage that can be curled 5 CONSECUTIVE repetitions (the trainee should not overwork with this weight).

Increase the weight so that ONE repetition can be done comfortably (rest 3 to 5 minutes between all sets and single reps).

Increase the weight again so that another single repetition can be done without straining.

Make one more weight increase and then perform THREE single repetitions (if the required 3 singles cannot be done then reduce the poundage so that the 3 singles can be done).

Continue on with this weight, striving to increase the number of singles each succeeding training period until FIVE singles can be performed.

At this point, increase the poundage at your next curling session so that three singles can be done as before and again work up to 5, etc., etc., etc. IMPORTANT: Increase the warmup and following graduated poundage jumps proportionately.


The second part of this routine consists of a series of 3 to 5 repetitions.

NOTE: When making a poundage increase as above it is normal to perform the required 3 reps on the first set. In the following sets the reps will usually drop to 2, or even 1 rep on the fifth set.

The curling technique and training routine contained in this article are designed to increase the trainee's limit curl, add size to the upper arms, and last but not least, condition the trainee to curl competitively and according to the existing rules of judging.

This style of curling is not to be confused with the "cheat" or "loose" curl in which heavier poundages can be used. I will deal with this method of curling in a future article.