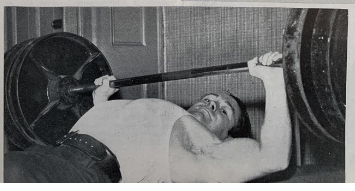 More and more bodybuilders are concentrating on power training and find this medium more interesting. Progress is of a more "definite" nature and, to the advanced trainer who has already developed an outstanding build, much more satisfying.

Possibly more important, it is a more constructive method of approach than plugging away aimlessly at schedule after schedule of approximately twelve exercises performed over 5 sets of 10-12 repetitions. The leading men in the physique world, in the main, now train steadily on POWER work, utilizing the more advanced split workouts and bodyweight reduction for a short period (5-6 weeks) before physique contests.

Even in France, where the theory that heavy resistance exercises spoiled the shape and contours of one's physique dominated, the logic of periodically incorporating POWER TRAINING TO OVERCOME LACK OF MUSCLE GROWTH is steadily gaining ground after practically a century of reactionary theories.

The tremendous growth in popularity of power training is not only due to the welcome variety it brings to workouts, but to the realization in recent years concerning the limited muscle growth attainable once the muscle structure (body metabolism etc.) have become accustomed to the blood-flushing sets of 10-12 reps.

At some time or other, it becomes only too obvious to us that the usual body building program can't produce continuous growth in muscle size. For many years the illusion that muscle growth and one's potential development depended on one's bone size prevailed. Today it is recognized that the main factor governing the size of a muscle is the character of the ligament, tendon, etc.

The knowledge that these muscle "attachments" can absorb from 10 to 14 times the amount of stress and strain the actual muscle itself can naturally influences one's trend of thought toward methods of utilizing much heavier weights than the normal bodybuilding type of schedule would allow.

Looking at the benefits of POWER TRAINING purely from a physique man's point of view, it is obvious that such heavy work develops a maturity of muscle density and shape unattainable from any other medium of training.

However, to use power training for one's own particular needs doesn't necessarily warrant dropping some exercises in your present schedule, which you may feel are essential to your overall physical condition.

You can still continue with your regular schedule and incorporate a few power movements for certain body parts.

Some fellows mistakenly consider that such a program must be devoid of pulley work, abdominal or calf work, etc. Of course this is not so; if one's physical condition requires specialization on the midsection or neck, for example, then this must be allowed for in your schedule.

The standard practice is of course to pick out several basic movements to cover all the main muscle groups, such as press behind neck, bentover rowing, squat, deadlift, bench press and barbell curl, performing each for 5 sets of 5 reps. However, a more advanced method of application is to utilize power work for a particular body part; these two or three movements in low reps being performed AT THE BEGINNING of your regular training program. In this way you can include power building for a particular body part in a regular bodybuilding schedule.

For example, one workout may include power specialization on the deltoids, the next one being planned with power work for the thighs etc.

In recognizing the tendency of including inadequate back work of a basically constructive nature (pulley work, etc.) in the average bodybuilding schedule, we have planned and illustrated a group of power exercises outlined to cover this particular area. From this example you should be able to see how power building can be applied to other muscle groups.

Performed at the beginning of one's workout, a longer rest than usual should be allowed between sets. While the routine is adequate for basic back development, the incorporation of an upper back "stretcher" such as chins or pullups behind the head is a feasible proposition for the enthusiast.

One of the most impressive backs the author observed while coaching at the last Empire and Commonwealth Games belonged to a fair-haired hammer thrower in action, stripped to the waist. Later that night he appeared at the gym and asked if he could work in with us. This he proceeded to do in no uncertain manner, concentrating on the power clean, working up to numerous sets of 3 reps with 270 lbs. with hardly any dipping of the knees. Incidentally, he won the gold medal for his event.

However, the important thing was that this was the ONLY back exercise he performed. The writer has, on many occasions, noted the increase in muscle density obtained be even very advanced bodybuilders through including 5 sets of 2-3 reps of this movement in their workouts.

While many fellows have concentrated on extremely heavy deadlifts, to the extent of utilizing hooked gadgets strapped to the wrists for poundages in excess of their gripping power, the writer believes the (deficit) deadlift on blocks to be a superior "assistance" exercise to the clean.

Fundamentally, poundages in the deadlift are NO indication of an individual's cleaning power - in other words, the best deadlifter is NOT automatically the one who can hoist the biggest poundage to his shoulders. Incidentally, this is clarified further in the text of the next exercise.

Commencing the deadlift with a 1 to 2 inch block below your feet, work out with pretty light poundages for the first couple of sessions. Once your reflex action has "settled in," increase the poundage until you are making near your limit weight for around 5 reps, increasing this until you can manage only 2 reps for 5 sets.

Undoubtedly, the "second pull" is the influential factor governing one's cleaning power (i.e., of the dozen men in the world credited with handling over 700 lbs. in the deadlift, only two are included in the dozen cleaning 400 or over in this century), the main feature requiring attention in the first part of the "first pull" in the clean is the placing of the bar in the exact position with the minimum of effort, to allow precise timing and concentrated effort on the second pull which is the decisive factor. Much fewer lifts are lost in the recovery and very, very few on the initial pull to knee level, and these are generally psychological in origin.

Beginning with a pretty comfortable poundage until your reflexes are familiar with the mechanics of the movement, progress onto heavier poundages. You should have little difficulty making 3 to 6 reps with your limit in the snatch.

The height of the bar's movement is shown in the illustration; also observe the narrow foot (used by even the squat clean lifter who has a wide foot stance with the hands inside the knees), and the elbow position.

If the last rep is always making the final height position illustrated YOU NEED MORE WEIGHT.

4 to 6 sets can be used, according to your reps and additional exercises, and or course. how you feel that day.