Article Courtesy of Liam Tweed
Hang in There, Brother! 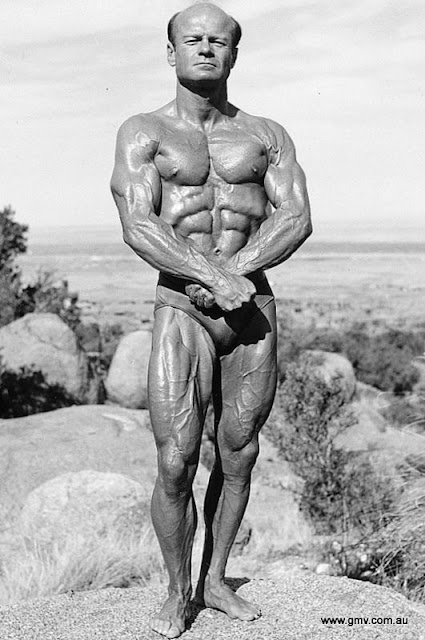 Many bodybuilders must have the same problem with curls that I do. I feel more strain in the crook of the elbow and in the forearm than I do in the biceps. I believe this is caused by the location of the origin and attachment of the biceps and brachialis muscles.

I have better developed forearms than biceps even though I do no direct forearm work. When I do regular curls the strain is mainly on the brachialis, the muscle lying under the biceps and originating halfway up on the upper arm and, like the biceps, attaching below the elbow.

The biceps originate all the way up in the shoulder area. As a result the leverage of the biceps is very poor when the arm is fully extended. The brachialis helps out as the arm first starts to bend. If you place your fingers on the side of your arm in the middle about one-half way up you can feel the brachialis. If the brachialis is well developed, your arms will be larger and more nearly round in shape swelling at the sides, but that is another story.

My problem, and I am sure the problem faced by many other bodybuilders, is how to place the primary stress on the biceps and not on the brachialis, or at least how to work both muscles fully. With my muscle attachments I need to work the biceps hard particularly after the arms have started to bend when the biceps are doing most of the work. I improvised until I came upon a simple but very effective routine.

I used dumbbells and the incline bench. One complete set is really three exercises in one:

The incline curl
The seated curl
The standing curl

I use a weight I can curl about 6 times in the incline position. When I can't make another repetition in the incline position, I immediately move into the seated position and continue curling. When I cannot make another rep in the seated position I stand up and finish off the curls in the standing position. In the seated and standing position I use just enough body motion to make each additional repetition possible.

Three multiple position sets would go something like this:

There is nothing magical about the total number of repetitions. Continue curling in each position until you cannot complete another rep and then move into the next position which will allow you to continue curling. 15 repetitions is where my biceps fell like they have had enough. Do the number of reps that feels the best for YOU. Pick a weight that will allow 15 or so reps and keep curling to failure in each position.

This series works my biceps more fully than anything else I have tried. In the incline position the stress is directly on the biceps rather than on the brachialis because the upper arm hangs behind the line of the upper torso and the weight pulls the arm down even at the fully contracted position.

Be sure and hold the upper arm steady as you do the incline curl so that the bicep will lift the weight all the way through the range of motion. If you allow the elbow to come forward there will be little or no resistance at the end of the curl.

I still end up with aching and pumped forearms, but my biceps are in the same condition.

The first time my training partner, Mike Ciesielski, tried this routine it took his biceps five whole days to recover.

If you want to make your biceps scream for relief,
try the multiple position curl.