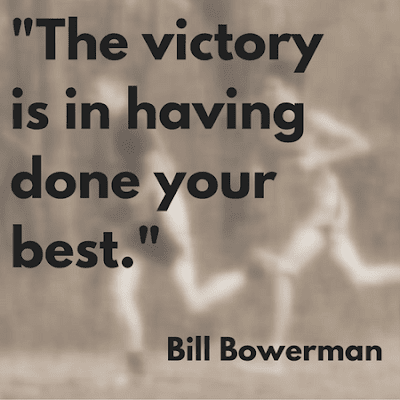 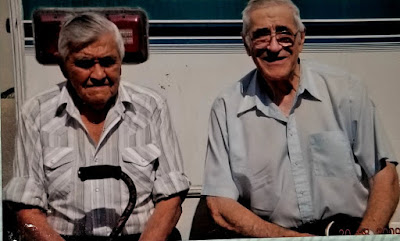 Striving to reach personal, absolute peaks is not a process reserved for high-level competitive athletes. It is a set of processes open to all of us, no matter what our skill level or age. Amateur athletes - that is, the vast majority of us - are likely to run into trouble, however, if we emulate the peaking practices of professionals.

As an amateur athlete you do not make your living by training and competing. The fact that the time you have for training and recovery is more limited immediately tells you that tackling a professional peaking program can only lead to frustration and disappointment.

When you couple a busy and sometimes stressful work life with family and other responsibilities and then add the rigors of a professional peaking program, the phrase "can only lead to frustration and disappointment" becomes an understatement.

If peaking is supposed to be an exciting experience for all athletes, how can those of us who are not candidates for professional peaking programs achieve this experience?

The fact is, all athletes can peak, but amateurs must take a somewhat different approach from what the pros do. We can't have very long peaking periods, and we must contain our workouts. As with professionals, however, we do have to understand correctly what's involved in peaking successfully.

The point of peaking is to reach your absolute best in performance or physical condition. You ride a physical and mental crescendo to an absolute culmination at a predetermined time and place.

Wise peakers, then, make choices and keep their goals highly specific. After all, it's usually better to reach an absolute best in something than to achieve only "good" performance in a number of areas. As we'll see, however, there are some exceptions to this rule.

If you're attempting to sharpen your training - that is, increase the focus and stress - some other parts of your training equation must change. for example, according to fitness expert Clarence Bass and powerlifting champion Fred Hatfield, peaking in bodybuilding should involve variable repetition ranges and types of performance to fully stimulate all a muscle's components.

Most of us seem to forget, however, that increasing the focus and stress of training demands even more attention to recovery. This is where we can take some good advice from professional athletes. Many pros - even with their vast capabilities - have learned to reduce training volume when they're peaking.

For example, runners may run a shorter distance but run harder, and bodybuilders may do fewer sets but do them with more intensity.

This seems to be the opposite of what many amateur athletes do. Amateurs often attempt to reach a peak by simply doing more of everything. This violates what peaking is all about, and because of his other life commitments it dooms the amateur athlete to failure.

An absolute axiom for peaking is, "Do less, but do it harder.' Let's see what this means within the perspective of health-and-fitness bodybuilding as advocated in this column.

Health-and-fitness bodybuilding involves a combination of sound nutrition, weight training, aerobics and other life skills. The notion of a COMBINATION is important. It would be inconsistent with the overall idea, for example, if you did no aerobic training for six months and just worked to increase strength. Likewise, the combination of efforts means the health-and-fitness bodybuilders should be relatively lean (goes well with elan!) and fit year round. Periodically gaining and losing large amounts of weight or not training for a while are also inconsistent with the basic idea.

These goals encompass that important combination of efforts described above. If you accomplish all of them, it is possible that you'll achieve an appearance that's close to your best ever. The question is, from everything previously stated about the specificity of peaking and the limitations of amateurs, isn't it asking for trouble to strive for that combination?

I don't believe that this is the case IF you stick to certain guidelines.

The strategy described here for a four week peaking phase assumes that you are in good overall condition, have no injuries and are not tired at the start of the peaking period. If you're not in good condition, have even minor injuries or are only a little bit tired, postpone peaking. Likewise, if you're anticipating added stress in your family and/or work life, put peaking on the back burner.

I detailed a nutritional approach that emphasizes losing bodyfat in the January and February 1991 issues of IronMan. Following the overall approach described there means that you will only gain or lose up to two or three pounds for the four week peaking period. This emphasizes the need to be in good condition at the outset.

The following training guidelines and plans are my own synthesis of Clarence Bass' Ripped 2 and Ripped 1.

1) Reduce your work sets per training session. A simple recommendation is to reduce the sets per bodypart by one-third; for example, from nine to six, or from six to four. Fewer sets means more focus but makes it easier to recover.

2) Incorporate all repetition ranges and performance styles into every workout. This means do lower-rep sets (6-10) in a more explosive way but with control; do midrange-rep sets (10-15) with a pause at the top and the bottom of each repetition; and do higher-rep sets (15-20) in a smooth, continuous style (see Ripped 3 for a complete explanation of these performance styles.

3) During the four week peaking period employ a step-by-step weight increase for all repetition ranges; this process should be similar to any periodization or goal attainment system. Your intensity, too, should build over the peaking cycle: Week one is moderate; week two is moderate to hard; week three is hard, going to failure on some movements; week four is very hard, with many personal record attempts.

4) Consider lengthening or otherwise modifying your training cycle. For example, if possible, extend your usual seven day cycle to eight or nine days by taking more rest days. Reduce your easy workouts from a more typical 85% of maximum effort to 75% or less. If you're not recovering from the hard workouts, drop the easy workouts entirely.

In terms of realistic aerobic goals you can probably only reach a peak on one or two exercises. Don't make the mistake of training too frequently on those exercises, however. Work on each of those activities only once every 7-10 days. Use the same plan for building intensity as you use for weight training: Week one is moderate; week two is moderately hard; week three is hard; week four is very hard, with you going for personal records. As noted, keep the sessions well spaced out. Rotate all of your aerobic exercises, doing aerobics no more than three times per week, and take extra rest days if you're not recovering.

Let's see what this overall plan looks like for individual workouts and an entire peak training cycle. 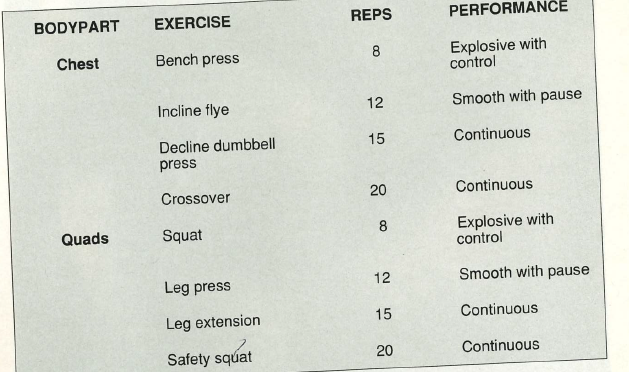 Figure 1 illustrates how to work bodyparts in a peaking session. You do only one set per exercise, four sets per bodypart. This may look easy, but have you ever tried to reach personal records in many different exercises with different repetition ranges and performance variations in the same workout?

The way the program is set up, if you do only two or three bodyparts per workout, you can complete each session in 30-45 minutes. Again, short, focused workouts are a critical part of peaking - especially for the amateur.

Figure 2 shows an aerobic workout designed for the peaking phase. You can use this approach for any aerobic exercise. Following this plan should lead to personal bests in most midrange (10-to-20-minute) aerobic activities or simply a personal best for a 30-minute training session. 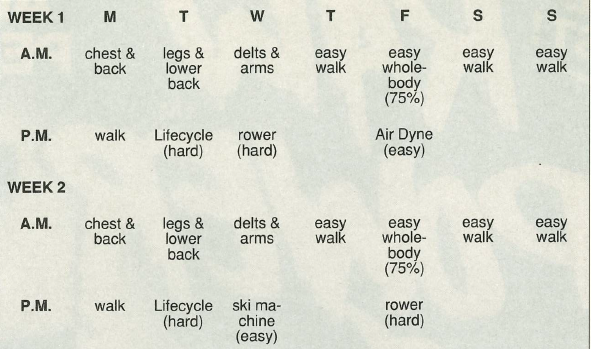 - The easier end-of-week whole body routine is made especially easy (75% of maximum effort).

- Except for the Lifecycle, which is a good fit for the leg workout day, there is considerable rotation of aerobic exercises.

- There are nine days between hard workouts on the rower.

- There are three complete rest days per week.

This schedule also meets one other important peaking requirement - there is a brief tapering off period before record attempts. Look at Figure 3 again. Since week one is the same as week three, at the end of the third week, prior to your record attempts in week four, you'll do only one easy weight workout and one easy aerobic session, and you'll also have three rest days. This is an ideal tapering period.

The Rewards of Peaking

If you haven't really extended yourself before, you may be asking, "Why go through this peaking process?"

Peaking is the most exciting and challenging training cycle. It is a time when you reach heights you planned for but possibly harbored some doubts about hitting.

Simply put, it is a time of personal transcendence.

For those who haven't tried peaking in this way and want a more concrete set of expectations, imagine the following scenario: How would you feel about making 12 personal best in weight exercises and two in aerobic exercises in the course of several days?

Peaking is exciting for any athlete, but it is also a difficult, exacting task. For amateur athletes peaking becomes even more challenging; however, even health-and-fitness bodybuilders can enjoy the rewards of peaking if they emphasize nutrition, weight training and aerobics and pay careful attention to a set of training guidelines.