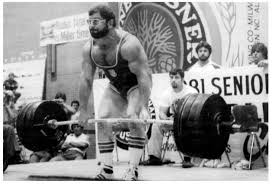 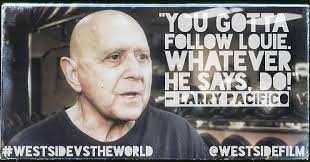 
This is the third and final part of my reminiscing the years 1965 through 1975. Without hurting anyone's feelings, I hope, I'll try to describe people I met as I saw them.


I received many calls and letters on Part Two of this series. All except one was complimentary. One person complained about my statement about Don Blue not being as good a burglar as he was a lifter. This person asked if he was as good a burglar and wasn't in prison would I have mentioned it?

I just received the bill for the awards for the Seniors. Hold on to your hats . . . $8,640. This does not include the team award of the Best Lifter ring. That's all I'll tell you now of the awards. Just seeing them will be worth the trip to Dayton. The solid gold ring is being designed by Frederick Prete.

I was never much on trophies. In fact I have never kept one over the years. I have kept plaques, cups, and medals, but never trophies. I used to, but then they would sit there and eventually have to be dusted. Have you ever tried to dust a hundred trophies? Plaques are easy. If you walk into my home you will see a few plaques on the wall. The awards at this year's Seniors will be suitable for placing anywhere in your home. Although it many need dusting, believe me, you won't mind. If you like trophies, you should walk into Mike Bridges' apartment sometime (preferably invited). This is a sight you won't soon forget. It is a shrine of Mike's lifting life, a shrine that will no doubt expand.

I met Mike at the 76 Teenage Nationals and became acquainted with him and later became friends. It was difficult for me to accept the things he was doing in lifting at the time. After all, I was the king in those days. Along comes a 5 foot 3 inch lifter doing lifts close to what I was, and I weighed 30 lbs. more. What was even more amazing was he still had much to learn. I remember Mike attended a seminar I attended in Chicago. He never asked a question but he listened and wrote down many things. He kept getting better and better. Mike moved to Dayton and worked for me for about a year. His training went well and his lifts went up even better . . . especially the bench.

By this time Mike was a squatting genius. He helped me and several others. He helped John Topsoglou so much that John may soon break Mike's 165 lb. squat record.

Mike moved to Texas in January of this year. He is missed in Dayton, but not forgotten. His return in July will be exciting and no doubt he will lift weights that will still be hard for me to accept. After having Mike around for a while, I understand him now. Mike's every move is lifting. He concentrates like no one else. He will not accept anyone outdoing him on any day, even heavier lifters. His interview last month was a true one. He doesn't drink . . . he's straight all the way. He will take no chances in doing anything that might affect his lifting, and he's got one amazing body. It doesn't injure. Maybe it's because he's careful in what he eats and drinks. He also sleeps 12 hours a night. Once just after he moved to Dayton he slept 20 hours.

Now, I like beer and pizza and I sleep 4 to 5 hours max . . . and I get injuries. I did try Mike's way. I didn't eat anything but the best foods, no beer, slept 8 hours a night, didn't even cuss for 8 weeks and even tried not to have sex (lasted three days once). I entered a contest and ripped a pec and cut off a finger. Oh hell . . . there's only one Mike Bridges and he's some kind of lifter.

I think one reason for Mike's success was starting out lifting young. I think around 13 or 14. Crain was another young starter. 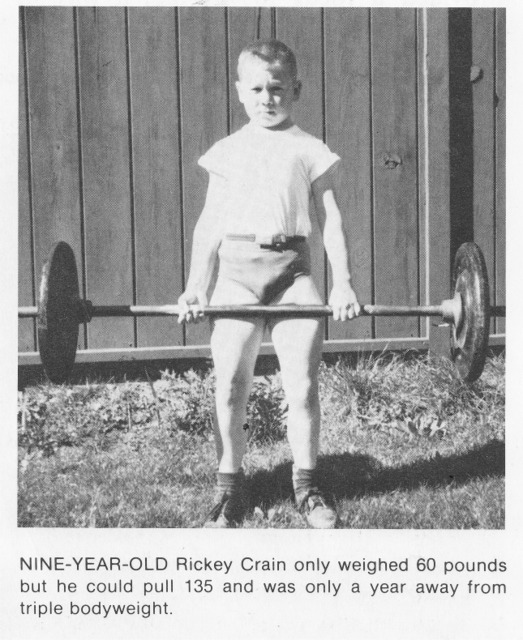 But listen to this story. I did a seminar in Tennessee once and the next day did a lifting demonstration at a contest. My seminars average between 3 and 4 hours.

I usually answer around 100 questions. This seminar was no different, except about a third of the questions were from a 10 year old kid named T. Cummins Just "T" and to my knowledge it stands for nothing. Anyway, his questions were good ones. His brother Jody and his dad Joe also asked a few, but T did most of the talking. Well, I soon found out that the Cummins family were some kind of lifting crew on the men's side. The next day they all put on quite a show. Jody was just 17, I think, and did a big squat, just missing the Teenage record, and his bench was over 460. Joe was, and is today, a top master lifter at 242, but T (Tee) was the show. He had a 26 Supersuit, Super wraps, and an approach to the bar that will always be vivid in my mind. I'm not sure what he weighed, but it wasn't 90 lbs. After the meet he came up to me and put his arms around me and said what a thrill it was to meet me. Well, I was moved and will never forget him of Jody and hope to be the father to my son that Joe Cummins is to his. I see them from time to time and they are going strong. 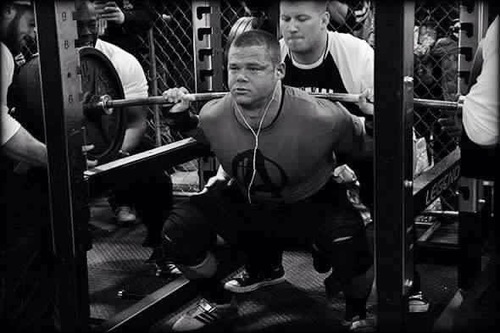 Okay . . . I gotta say . . . aren't we lucky to have Mike Lambert? Think about it now. How many magazines have come and gone? Four or five I think. Powerlifting USA has made it. Not an easy accomplishment. I believe Mike made it because of his good business sense and the fact that he is not swayed by any controversy. He sits in the middle from the start to the finish and reports both sides. Politics seem to upset him, and honest reporting has won him my respect. I was among the first to advertise in his magazine and my business has expanded substantially. Few people are in business because they flat enjoy it. Most are in it to make a living. Mike, I'm sure, does well now because he paid his dues. Hard work always pays off whether you lift or enter into business. Next time you meet Mike thank him for the job he's doing and for bringing our sport along.

Last month I mentioned Perth as being one of my favorite trips.
I roomed with Doug Young. 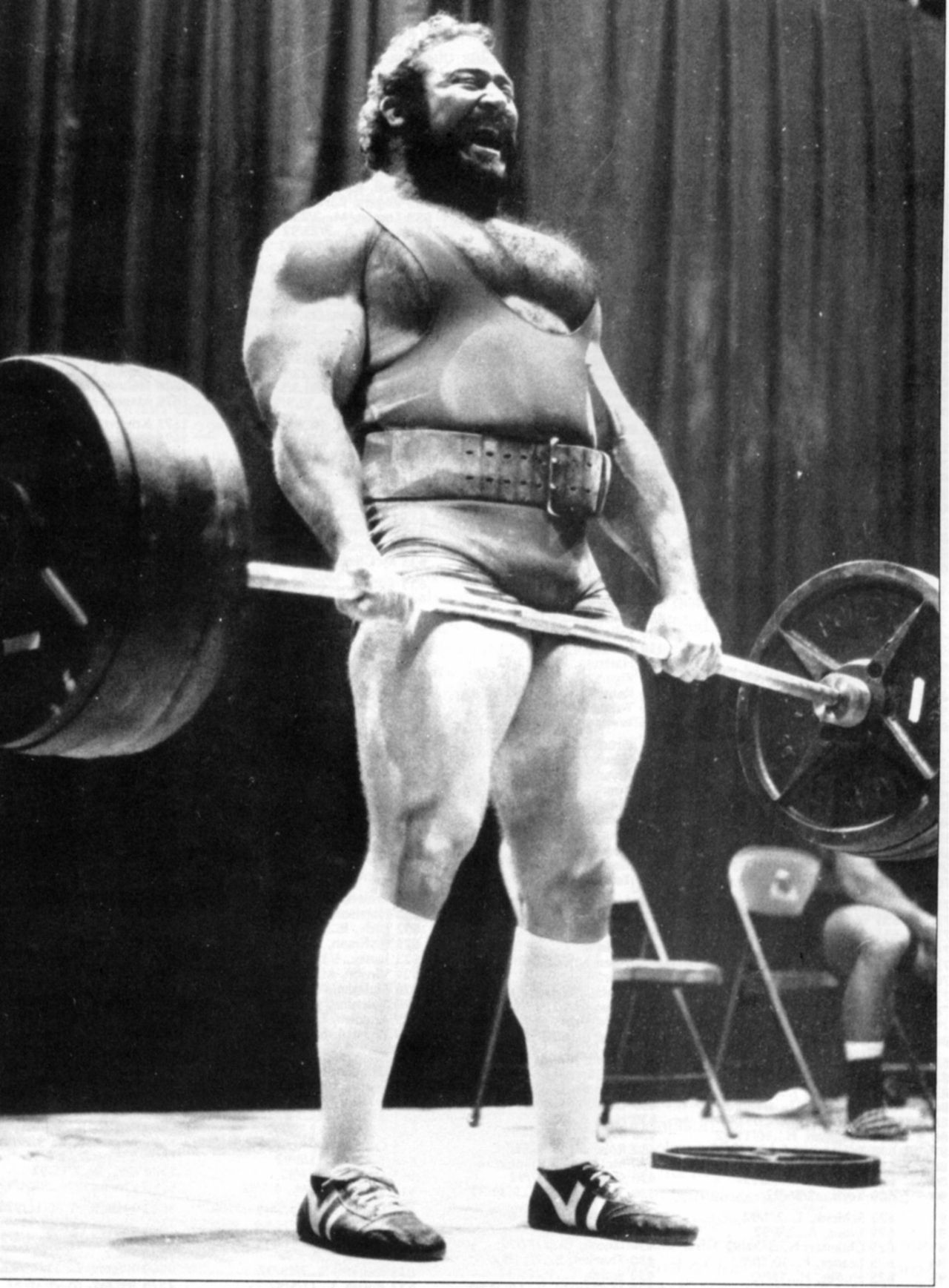 I was outstanding lifter in Perth and received a nice silver cup, but I should have gotten a gold cup for lasting 10 days with Young. Keep in mind that he had to lose 28 pounds the last 7 days. Doug doesn't have a good disposition, but when he can't eat, it's dangerous to be near him. The reason why Doug went down from Super to 242 has never been told, but now here's the true story.

Terry McCormick and Clay Patterson were both 242. Doug was Super when we left for Perth. Doug and Clay weren't the best of friends. Fact was Doug disliked Clay a bunch. Clay and Doug had problems for years due to some old suspensions Clay laid on Doug when he was chairman. Well, Terry injured himself a few days before we left and he would have easily won if healthy. Now it was a question, and it loked like Clay would be World Champion.

Doug wouldn't hear of it. Since Terry would probably take second at 242, why not move him up as he would still take second and Doug could come down to prevent Patterson from winning. All who were in charge or involved agreed.

But could Doug lose 28 pounds? When it comes to things like this, Doug as the expert. He had some unique ways of making weight I can't get into here, but he made it with much pain. I know it didn't help when I would eat steak and fried chicken in front of him. And I know it didn't help when lifters came to the room at all hours buying Super suits and wraps. Once I lost a sale to some Japanese guys when Doug became a bit grouchy when they knocked at the door.

I'm sure they didn't speak English, which was good. These guys were great lifters, but we also heard that they practice Kung Fu 9 months a year. Although they were small, they would have taken offense when Doug referred to the activity of their mothers.

All in all we had a great time. Doug was really funny and the whole team helped him. With the exception of one.

I said I would write about Ron Collins here, but I hope Mike allows me one more story. This has run longer than I anticipated. There is so much more I left out, but there's just not enough space. Thee things I have written about are events I found interesting and funny. I hope you enjoy them.

Note: The series went to 4 installments to provide enough space.