Forearm Catch Up - Thomas A. Seward

I like forearm training. It doesn't take much out of you, and up until the tendons at the elbow get screwed up  there's no real limit on how much of it you can do.

What woman with an 80 I.Q. and developmental issues isn't drawn to a guy with extra flesh on his forearms!


Malcolm hadn't been around the gym for more than a year. I heard through the grapevine that he'd joined the Paradise Island Spa, drawn no doubt to the glitter of its chrome-plated dumbbells. He might also have been drawn to the provocative bikini babe who graced the Paradise's ad, offering muscles, fitness, eternal youth and - if your hormones were active and your imagination overactive - herself. So it was with some surprise that I found him standing in front of me as I was putting a pair of dumbbells back on the rack after a set.

It was Malcolm all right, but only the name was the same. Gone were the T-shirt, shorts and sneakers of a year ago. The new Malcolm was attired in the height of bodybuilding fashion, decked out in fluorescent tights and a "Gorilla Gym" tank top that hung loosely from his shoulders via two gauze-like strands that left all but his navel and lower back bare. His footwear featured magenta laces with mauve tips, and the top of his head was covered with a red bandanna pulled his long locks back and sent them slithering down his back.

"Malcolm, you look . . ." I hesitated, not knowing whether to comment on his outfit or his physique, then decided for the latter, "great."

"You really think so?"

It was not a rhetorical question. As he only bodybuilder in town who'd ever won a state or regional contest, I was regularly asked to appraise the physiques of the younger athletes.

"I'm going to enter the local contest again," he said. "What do you think my chances are this time?" His request was so filled with optimism and enthusiasm that I gave in and kissed the rest of my workout goodbye.

"Okay, Malcolm," I said, resigned to it. "Go put on your posing briefs."

Malcolm rushed into the dressing room and was back in a few short minutes. He began pumping himself up with light dumbbells, and the oil he had hastily slapped on began dripping, splotching the weight room floor. He was definitely bigger than before, and his definition wasn't half bad.

"All right, Malcolm. Strike some poses for me."

He swung around to face the mirror and grimaced out a double-biceps that had his arms quaking with tension. About 10 poses later I called a halt.

"You can stop now," I told him. "I've seen enough. I say you're good with signs of greatness."

"Wow, Tom! You're not kidding me, are you?" he asked almost apologetically.

"Of course not. But I sad signs of greatness, meaning only that potential is there."

"Oh," he replied with noticeable irritation.

"To get better, you need to pay more attention to the details. You've definitely got some outstanding bodyparts but I can also see a few weaknesses."

He stared at me blankly.

"You've trained hard and made real progress," I continued. "That's obvious. Now it's time to stand back and evaluate the results. So don't be surprised if my words sound a little harsh. It's for your own good."

"Okay, Tom. You're right," Malcolm conceded as I continued to stretch the paid-by-the-word count in this article, breaking the 4th Wall to get all chummy and such with my readers. "I want you to tell me where I need to improve."

"Well," I said, "your most conspicuous weakness is in your forearms." His jaw dropped and he was speechless.

"I know what you're thinking - nobody pays any attention to forearms. No one poses them. They're just there, right?"

He shrugged.
I edited the pun.

"Look at it this way," I said. "Having the rest of your body well-developed and in proportion except for your forearms is like having 31 out of 32 teeth in your mouth when you smile."

"All the great bodybuilders of our time, from Grimek 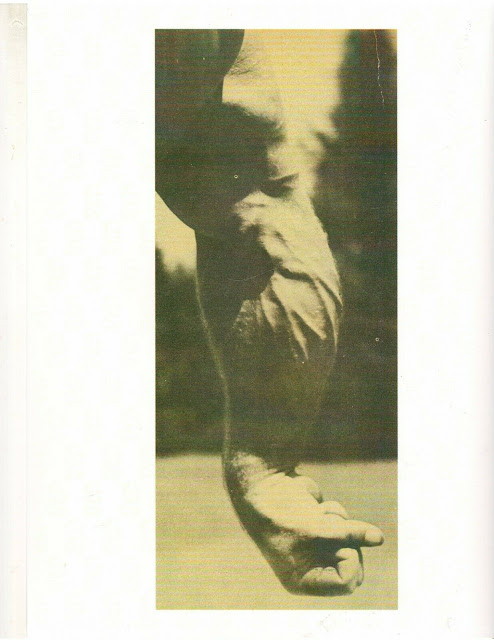 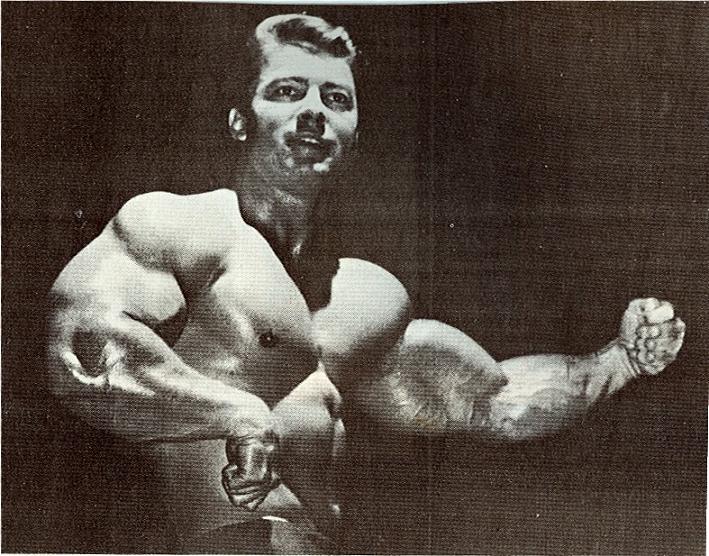 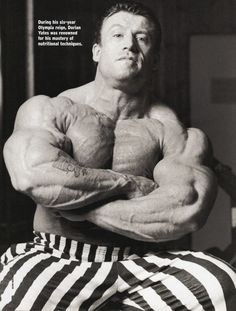 have known the importance of developing their forearms to the fullest," I continued. "But I dare say you've never done a single forearm exercise in your life."

"I'll answer the question for you," I said. 'Of course not. And that's why they look so out of place hanging there from those great upper arms of yours. You've got gap-toothed arms!"

Malcolm had already resumed his flexing in front of the mirror. He extended one arm after the other, this way and that, manipulating his wrists in an effort to get his forearms to budge.

"Your forearms would look all right on a guy with smaller upper arms, but right now you have 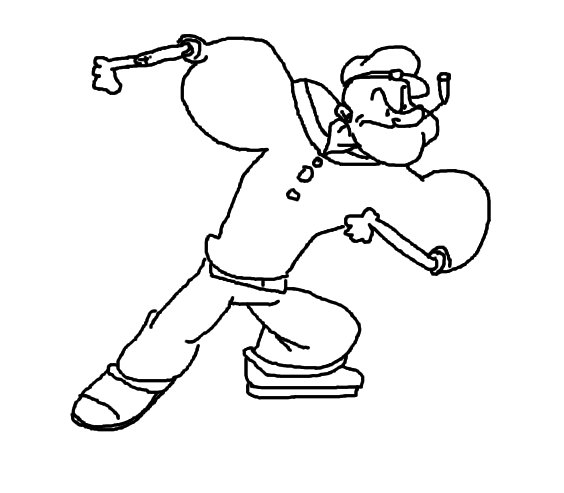 As I made that last comparison, I could see him droop. I was becoming cruel, and it was time to pick up his spirits.

"You've still got a good three months left before the contest," I said. "With some concentrated effort I believe you can bring your forearms up a bit, maybe even enough to fill in the gap."

"I thought you'd never ask," I said, laughing to myself. "The first thing you've got to do is add a forearm workout to your routine. Let's go over the exercises first, and then I'll suggest howto fit them into your program."

"The muscles of the forearm are activated by the flexion of the fingers and the movement of the wrist," I explained. "That's an important point to remember that will help you understand why I suggest specific ways of doing your forearm exercises. The first of these is the wrist curl."

"Go ahead and grab a pair of 30-lb. dumbbells and sit on this bench," I instructed. "Put your forearms on your thighs with your hands extending beyond your knees, palms up. Let your hands hang down and allow the dumbbells to roll to your fingertips as you open your hands slightly. Now roll the weights back into your palms, grasping them firmly, and curl your wrists up as far as they'll go. Do about 12, slow, even reps."

Malcolm did exactly as he was told.

"Exchange those 30s for 20s now and go back to the bench. Place your forearms on your thighs again but this time hold the dumbbells with your palms facing down. Reverse wrist curls. Do about 12, slow, even reps."

Malcolm followed my instructions to the letter, and when he finished, he looked up at me in anticipation.

"Now your forearms should be ready for some real work," I said dramatically. I fished my wrist roller out of my bag and handed it to Malcolm. He looked at it quizzically. It consisted of a 16-inch long, 1 1/4-inch thick wooden dowel with a thin rope wrapped tightly around it. The rope was knotted securely at one end and threaded through a hole I'd drilled in the middle of the dowel.

I took back my work of ar, unwound the rope and attached a 10-lb. plate to the other end of the rope. With Malcolm still staring in wonderment, I held the dowel at arms' length with both hands, palms facing down. Alternating my hands in a wrist action, I rolled the rope onto the dowel, lifting the plate from the floor until it touched the dowel. 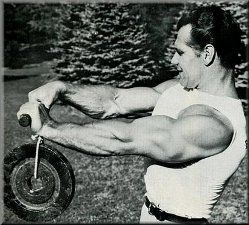 "Here," I said, offering him the contraption after I unrolled the rope and lowered the plate back to the floor. "Your turn," missing yet another poor pun.

Malcolm took the wrist roller with the enthusiasm of a child trying out a new toy.

He held it out in front of him with his arms parallel to the floor as I had done. The plate rose slowly and steadily as he wound the rope with the brute strength of his forearm muscles. Only after the plate was firmly against the dowel did I speak.

"If you roll your wrists forward and downward to raise the plate, as you just did, you use the underbellies of your forearms. Let the plate back down to the floor now by reversing the action of your wrists."

With some effort Malcolm followed my instructions again. This time he smiled in relief as the plate touched down.

"Now lift plate using the same reverse motion you just used to lower it. So you'll be pulling the backs of your hands toward you, alternating sides, in order to raise the weight," I clarified.

He took a deep breath and completed the task.

"I can feel my forearms starting to burn on top. They're really getting pumped up," he said with relish after he lowered the plate by alternating hands in the forward motion.

"I assume you noticed that each time you rolled the weight up with one hand, you had to loosen your grip somewhat on the other hand so you could rotate the dowel. That continual relaxing and gripping of your fingers is an added benefit of the wrist-roll," I remarked.

"Now it's time to tie your forearms into your biceps workout with front curls." I pointed to an empty Olympic bar on the floor nearby and told him to get it. Then I explained how to perform the movement.

"Hold the bar with your palms down and your hands at a comfortable width," I said. Now ROLL YOUR WRISTS BACK AS FAR AS THEY'LL GO and then curl the bar up toward your shoulders, keeping your elbows snugly against the sides of your body."

"You'll feel this kind of curl in your lower biceps and the tops of your forearms," I explained. "It creates a continuous tension in both areas so that they're both strongly affected."

He nodded his head in agreement as he continued to perform rep after strict rep. After about 15 curls he looked at me with his eyebrows raised high. He was game for more.

"That's enough exercises for the moment," I told him. "Get your training journal and a pen [or imbecilic fucking cellphone app] and jot down sets and reps and I'll tell you how to fit them into your arm routine."

He went to his bag and brought out a dog-eared notebook with a pen clipped inside the spiral binding.

"Here's what you should do," I said. "Begin your arm workout with forearms. Attack them full force when you're fresh so you can get the most out of your effort."

Then I wrote the following in the notebook:

"After that you go right into your biceps routine full force," I elaborated. "You'll probably find that your forearms tire before your biceps, but do the best you can with them. Remember, it's your forearms that you need to build up right now, not your biceps."

This time when I spoke strongly, Malcolm didn't bat an eyelash.

"Since you've never really worked your forearms to any extent, I suggest you begin by using lighter weight than you think you should," I cautioned, "and don't go to all the way to failure on the wrist-rolls for a couple of weeks either."

"Gotcha! Thanks a lot, Tom." He smiled and shook my hand. Then he gathered up his gear and left the weight room.


Some Good Stuff from Charles Poliquin

Periodization is a training method in which you cycle your training through various phases to concentrate on one goal at a time and avoid over-training. In this forearm program

workout 1 is an accumulation phase that stresses the system through a high volume of training,

while workout 2 is an intensification phase that stresses the muscles through a high intensity of training.

You use each workout for three weeks at a time, switching from one to the other every three weeks.

Perform three tri-sets. Take no rest between exercises and then rest 90 seconds between tri-sets.