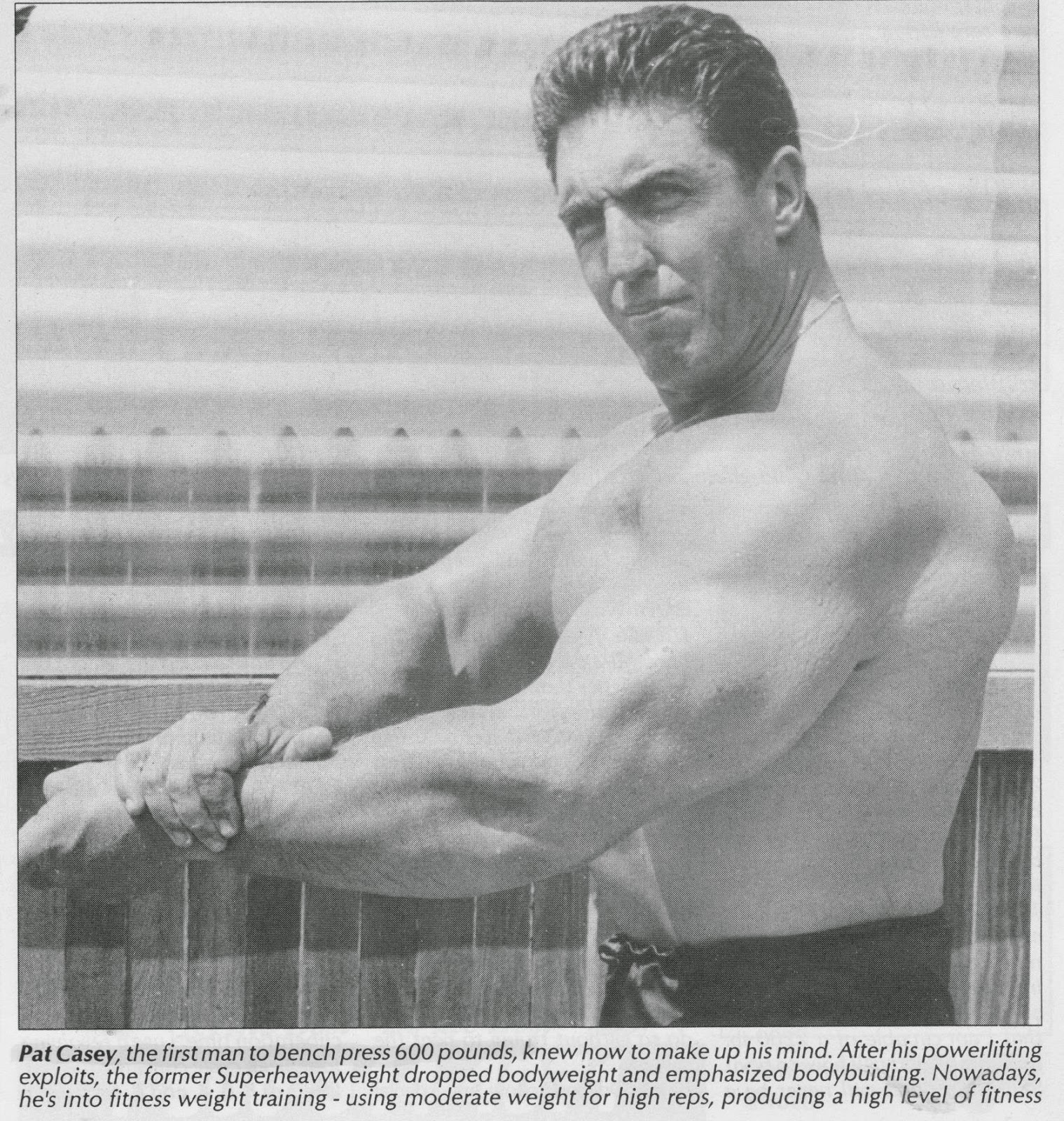 The bench press is probably the most popular weight training exercise of all. Generally conceded to be the greatest all-around upper body developer, it can mass up the chest, delts and triceps and pack them with immense power. Arnold referred to the bench press as the king of the exercises in one of the articles he wrote when he was the reigning king of the bodybuilders.

I have read well over 100 articles on the bench press over the years since I began training, and almost every one of them was primarily aimed at the powerlifter. I would like to take the opposite approach here and speak to the bodybuilder who is seeking greater muscular development as well as increased power. After all, bodybuilders used the bench press as a muscle-building exercise decades before powerlifting was officially recognized as a sport by the AAU.

Powerlifting: How It All Started, by Peary Rader:
http://ditillo2.blogspot.ca/2009/12/powerlifting-how-it-all-started-peary.html


Some of the world's greatest bench pressers were bodybuilders. Marvin Eder benched 510 in 1953 while weighing around 200 pounds. He won numerous bodybuilding contests and possessed one of the most amazing physiques in the world at that time. Other bodybuilding champions who have benched large include Reg Park, Bill Pearl, Chuck Sipes, Bertil Fox, Kal Skzalak and Charlie Fautz.

As you might surmise, you don't have to look like the Goodyear blimp to be a great bench presser. In fact, the purpose of these comments is to illustrate that increasing your bench press power can help you build a more massively muscular upper body -- just as it did for the above-mentioned lifters.

Now, before powerlifters all over the world put out a contract on me, I'd like to say that the greatest amount of weight I ever personally witnessed being elevated in the bench press was the 660 pounds Bill Kazmaier pressed in 1978 at an AAU contest in Sacramento, California.

Kazmaier was a giant of a man who had tremendous shoulders, arms and chest and a V-tapered back that flowed symmetrically into a trim waist. He looked like a modern day Paul Bunyon.

Years earlier Pat Casey, a former training partner of mine, had been the first man in the world to officially bench press 600. Casey had started out as a bodybuilder and once entered the Teenage Mr. America contest. He did 639 in competition but was denied a new record because the scale had not been officially certified and sealed as per AAU rules. His record of 619 stood for many years.

-- One interesting note here. Pat claims that Gene Mozee talked him out of playing football his senior year. He got Pat to focus on his training. Gene told him better to be a big fish in a small pond than a small fish in a big pond. Gene saw at an early juncture in Casey’s career that he had awesome potential and that with good training and guidance he could be a world beater. Actually during 1961 Mozee tried to introduce Pat to Bob Hoffman, the “father” of Olympic lifting, Powerlifting etc., etc. This was in Santa Monica 1961 at the Senior Nationals. Hoffman had been talking about America needing to get big strong men into Olympic lifting, but according to Mozee, Hoffman said “at a later time.” One never knows what Pat could have done with serious specialization, but one only has to look at how well Shane Hammond has done (Powerlifter turned Olympic lifter – 407 ¾ Snatch and 485 Clean and Jerk).
- from the Pat Casey book by Bruce Wilhelm.

There's no denying that the stronger you get, the more mass you can build.

A great number of muscles are involved in the bench press movement -- all of the muscles of the chest, deltoids, triceps, intercostals, lats and lower back. Overload is lord over muscle building. Simply stated, a muscle or muscle group grows larger and stronger only when it is required to perform tasks that place loads on it that are over and above previous requirements.

Power assistance exercises are one key to rapidly increasing your bench power. You must strengthen your ligaments and tendons, and you can only accomplish this with heavy weight. There are several ways to approach this. Jim Williams, the first man to reach 700 on the bench, used the forced-rep method at times -- two training partners help with the weight so you can handle 50 to 60 pounds over your strict limit for reps. The bridging technique -- hips off the bench and the body highly arched -- was advocated by powerlifting authority Dan DeWelt.

The best method I have ever found to increase ligament and tendon strength for rapid gains in the bench press is floor-press lockouts. It enabled me to bench press 455 strictly while weighing 220 lbs, back in 1957, and no, I didn't take steroids. My best at 181 was 391.5, which at that time was a world record with a two-second pause at the chest. Don't worry, however, I'm not going to break my arm patting myself on the back. I'm just trying to illustrate the fact that floor-press lockouts really work.

The simplest way to do these lockouts is to obtain two old fashioned milk crates -- the heavy metal and wood type. That might take some looking because the crates only seem to come in heavy plastic these days. You could build your own boxes quite easily with minimal tools. An alternative is to do the lockouts in a power rack. Here is the method I used with the milk crates:

I got a dozen 1x12 inch planks, each three feet long. I placed the crates just inside the plates on either side of the bar and positioned six planks under each crate. While lying and positioned on the floor under the bar and between the crates, I only had to push the bar 2 to 3 inches to achieve a full lockout, and I was able to lock out about 100 pounds more than my best full bench.

After four or five workouts I removed one plank from each side to slightly increase the range of motion. Because my tendons and ligaments were complying with the overload principle, I could still use the same weight.

I kept progressing in this manner -- removing a plank from under each crate every four or five workouts -- until all the planks were gone. After this lockout training my bench press usually skyrocketed about 50 pounds.

Remember, however, that floor-press lockouts are a very severe form of training. You must take care not to overdo it, and to avoid injuries. Don't get greedy! When handling poundages that are well over what you are normally accustomed to it is very important to warm up sufficiently. Here is a sample workout schedule based on a bench press limit of 300 pounds lifted in good form:

Make sure you position yourself with the bar located exactly where it would be at that point in your full bench press.

This is a tough workout that can take 45 minutes by itself, because you require much more recuperation time in between sets when handling these larger poundages. You can do this program three times a week if you recuperate quickly between workouts. If you find yourself too sore -- with the ligaments and tendons aching -- rest a full three days between sessions. You may continue to train the rest of your body while on this program, but don't do any other types of chest pressing. Three sets of flyes and pullovers plus the lockout program is all you need for the chest on this power program.

As I said earlier, you can do this same type of program in the power rack, providing your rack has fine enough pin spacings. Here are a few tips to consider when using a power-lockout routine:

- Try for a new maximum single record on each lockout day. In the listed sample program, for example, the lifter would attempt 410x1 on his next workout. If you try for a personal best and can't make it, have your training partner near by so he can place one finger under the center of the bar to give you just enough assistance to complete the lockout. It is important to build up a positive mental attitude by always succeeding with your limit poundage -- even if it requires a little bit of assistance.

- It's best not to try for a personal record during the first workout at a lower bar setting. Let your tendons and ligaments adapt to the increased range of motion before upping your limit poundage.

- Concentration is extremely important. There will be times when you'll be pushing hard against a bar that is 100 to 150 pounds more than you can bench press, and it won't want to budge off the boxes. You'll have to work up your adrenaline for an all-out explosive push. I once missed a limit lockout with 600, but I came right back after a few minutes rest with my mind straight and full attention focused on the weight and blasted out two reps.

- Don't stay on a power lockout program for more than six weeks. It can be both physically and mentally exhausting if you continue or too long, particularly if you are a bodybuilder and not a powerlifter.

- When you go back to the full range bench press take it easy for the first three workouts or so. Don't try for a new personal record -- even though the weight you used to handle will feel lighter because of your increased ligament and tendon strength. Your pectorals and front delts won't be accustomed to a complete range of motion with maximum poundages, and you can easily injure yourself by trying too much too soon. It happened to me because I was so anxious to see how much I had improved. The increase was too great, and my injury was miserable.

The last time I used this power lockout system my bench press improved from 410 to 455 in 27 days. My training partner, Richard Kee, zoomed from 470 to 525 in the same period. These lifts were done in strict style -- no cheating by bounding the weight off the chest or raising the hips.

- During the next several years Pat Casey's training took on a somewhat inspired note during his lifting at Gene Mozee’s Pasadena Gym. There were plenty of strong lifters as well as Mozee himself. There wasn’t a day that some strongman did not show up to train. It was a great environment, somewhat reminiscent of Bill “Peanuts” West and his Westside Barbell in Culver City in the late 60’s and 70’s. Everyday personalities were 205’ discus thrower Bell Neville, bodybuilder/strength athlete Dennis Melke (495 bench press at 220), as well as the reclusive Richard Kee who is a story in and of himself. Pat remembers Kee doing a 300 behind neck press circa 1958 and no drugs. Mozee actually gave some other details on Kee, such as a 525 bench with feet straight out.
From the Bruce Wilhelm book on Pat Casey.

Power lockouts are the best way I know of to add 50 to 75 pounds to your bench press in a short amount of time. Give them a shot. They work.