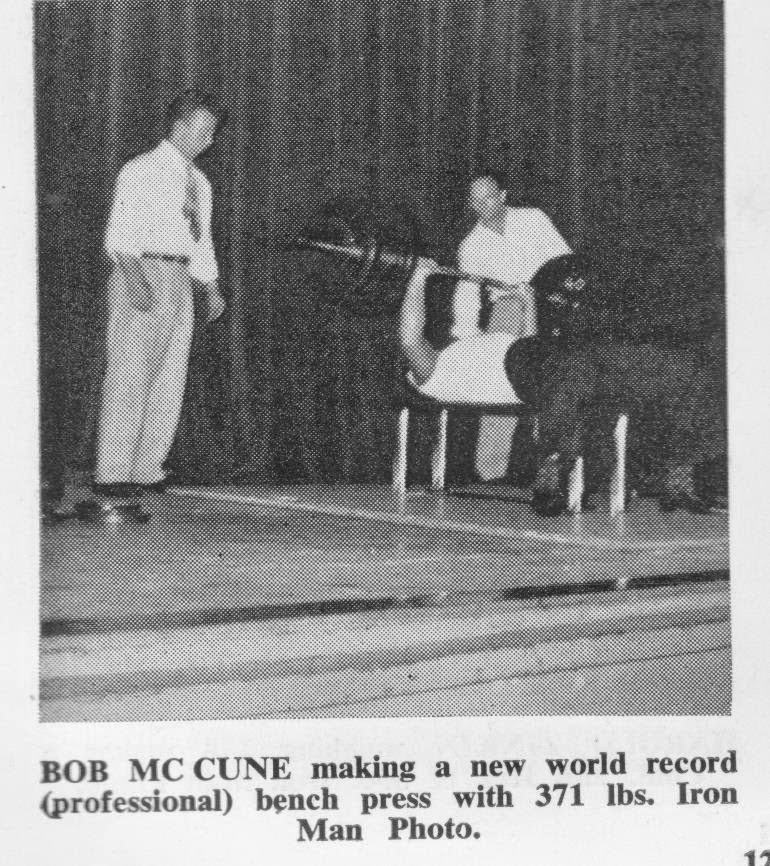 Although not everyone is constructed with leverage that will enable him to become a champion performer in the dead lift, it's probably safe to state that anyone can handle more weight in this lift than he can in any other that could be called a 'full-range movement'.

What does championship dead lift performance require? Primarily strength, especially in the back and hands, and it also requires great determination to exert force against what often feels like an immovable object. But to really reach the heights, a man with favorable leverage always has an advantage. The most obvious bone structure advantage is possession of relatively long arms.

Both these men did their best dead lifting back in the 1940s. Terry actually hit a peak in the late '30s that he held for several years while he was also featherweight champ on the three Olympic lifts. Terry did his best dead lifts, in terms of absolute poundage raised, e a few pounds over the 132-lb limit. The dead lift really wasn't generally popular even 20 years ago, and its popularity, if anything, has only increased slightly since then.

Peoples never had much interest, or ability, in the three quick lifts as Terry, but he was a capable performer by the standards of the time. Peoples could clean and jerk in the vicinity of 300 lbs. Terry was actually very good at the three lifts, setting what was then a record for the snatch  with 215 lbs. But his three-lift ability never approached his dead lift performance. There are plenty of men, and there were even then, who could clean and jerk more than Peoples could, but who couldn't come within 200 lbs of him in the dead lift. And Terry, though he could clean and jerk about double his weight, was dead lifting more than most heavyweights, a much more impressive feat.

Peoples and Terry had unusually long arms for their heights, and t hey also had impressive ridges of muscle running from buttocks to shoulder blades. These are not just the 'showy' muscles that produce an impressive looking back spread, but really vital muscles that can move hundreds of pounds. People was slightly long-legged relative to this trunk length - but not relative to the length of his arms. Terry probably had a slight leverage advantage even over Peoples in that he had the leg structure that makes for good squatting position in addition to long arms. This meant that he could grasp the bar comfortably and start in the recommended flat-backed, fairly erect position that is most efficient for beginning a lift from the floor.

To perform a correct dead lift, you should grasp the bar as you would for a clean, with your feet a comfortable distance apart (about hip width), hips lower than your shoulders, and your back flat. To aid your grip, you may find it more efficient to lift with one palm front and one back; that is, one hand grasping the bar as though to clean it, and the other grasping it as though to curl it.

Ideally - and you should always lift this way when exercising - you should raise the barbell smoothly (keeping your back as flat as possible) and continuously until you are standing completely erect with your head up and shoulders back. At this point, the barbell will be across your upper thighs.

In regular training, you should always find it possible to maintain this position, but on those occasions when you want to try a limit single, you may not. Most personal record deadlifts are not made with a perfect flat-back position. The dead lifter going all out usually winds up rounding his back considerably as he drags the weight past his knees. Pictures of Peoples in action indicate that that he lifted strongly with a round back. For this reason, it is a good idea never to try a limit dead lift unless you are in first-rate condition and are sure your back is both strong and flexible.

Most modern weight trainers neglect the dead lift as an exercise, even though it is a good one for developing all-around strength, and specifically good for developing back and grip strength. This is probably because its practice calls for unusual mental concentration and stamina, as well as a prodigious output of energy.

Because the exercise is a tough one - producing real fatigue as well as sore back muscles on occasion - is no reason to avoid it. This is especially true if you employ a tested tested Weider principle in your dead lift training - Staggered Sets. By using Staggered Sets you can train on dead lifts more effectively and a bit less 'painfully'.

The staggered set system violates the body building principle of working the same or closely related muscle groups repeatedly in order to flush the area with blood, but when you are tackling so demanding an exercise it is necessary to break the routine with other exercises that will permit you to recuperate and return refreshed for another set of dead lifts.

You do it this way: load the barbell to a weight you can handle for 5 repetitions and do the lifts with as good position and smooth performance as possible. Then rest briefly and perform a set of a different exercise, such as the rise-on-toes - which does not involve the back and grip as does the deadlift - rest again and load the bar to a heavier poundage for a second set of dead lifts. To quote Dr. Peter Karpovich, in the book Weight Training in Athletics, [Karpovich, Murray] - "Not everyone . . . knows that while one group of muscles is resting and other groups are exercising, the strength of the resting muscles may not only return to normal but actually become greater than at the beginning of the exercise."

To take advantage of this physiologic fact, you must remember to sandwich in with your dead lifts other exercises that do not make strong demands on the same muscles as the dead lifts. The rise-on-toes, involving the calves almost exclusively, is one of the best exercises to stagger between sets of dead lifts. Another good one is the sit-up with bent knees- but not the sit-up with straight legs. Still another is either the deep-breathing pullover or bent-arm laterals with dumbbells, both done lying down, primarily as chest-expanding exercises. The breathing exercises - done after any demanding exercise, such as dead lifts, squats or cleans - are always a good way to speed recovery for the next set of tough exercises.

After working up to fairly heavy poundages on your third or fourth set (you may have to cut back from 5 to 3 or 2 reps as you work up with the weight), drop back for a set with a lighter weight - about the same amount that you used for the first set. This tapering off set will help prevent muscular soreness.

Occasionally do some stiff-legged dead lifts to strengthen your back against strain at times when you do get out of correct lifting position. With straight legs, you should use considerably less weight than when you lift with bent legs. A man who can dead lift 400 lbs will get a good workout in the stiff-legged deadlift with half that amount. It is possible, however, to work up to very heavy poundages with straight legs - providing you train up gradually over an extended period of time. Ludwig Shusterich could dead lift almost as much with straight legs as with bent legs, actually working up to 600 lbs without bending his knees. Lud, incidentally, is another man with relatively long arms, though they do not look long because they are so large and muscular. 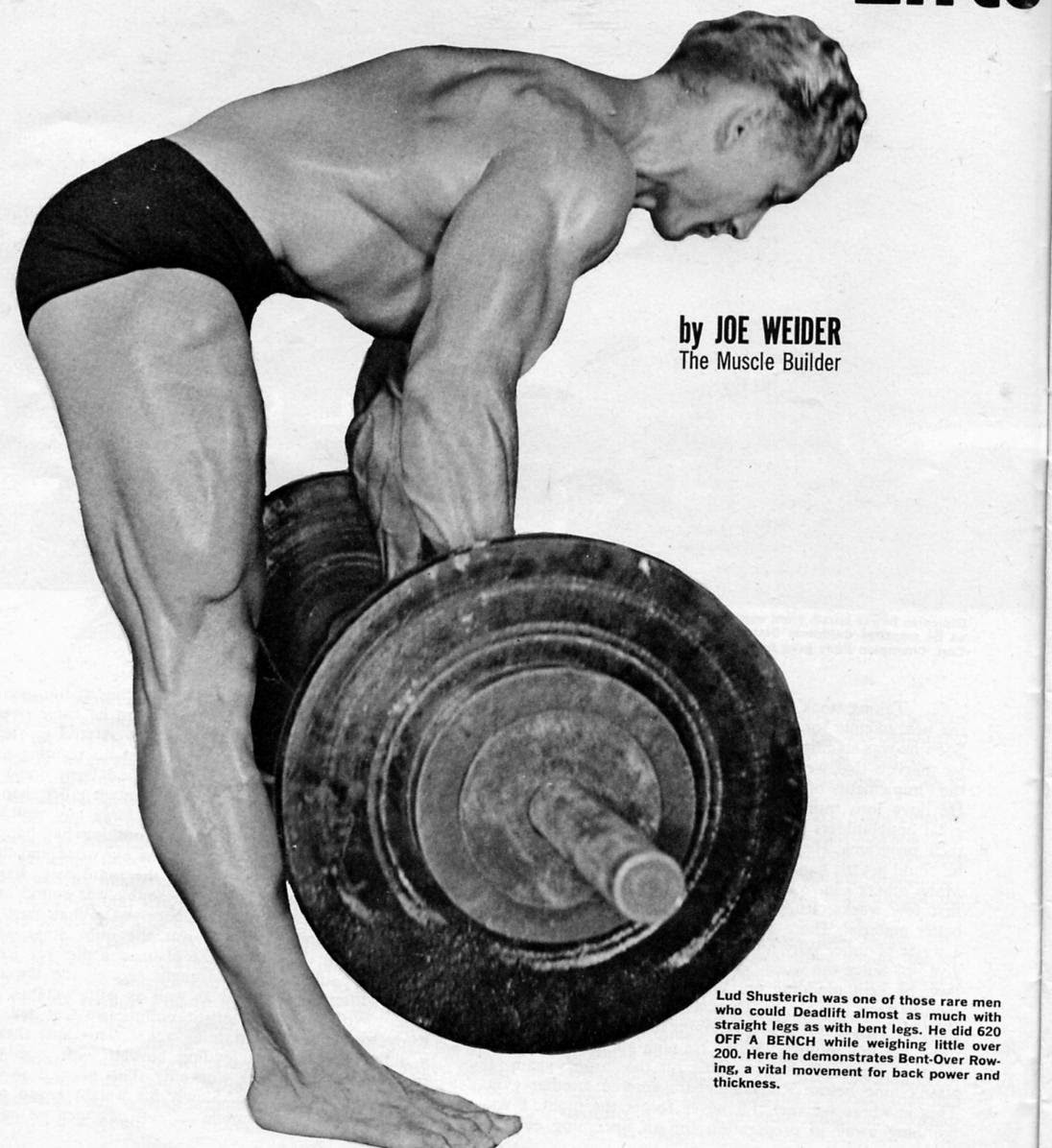 How much should a strong man dead lift? We can't all match Terry, Peoples and Shusterich. Some strong, weight trained football players weighing over 200 lbs are happy to dead lift 400 or more, so 400 can't be considered a 'light' dead lift. One former light-heavyweight weightlifting champion, who could clean and jerk well over 300 lbs, had a best dead lift of 440, so the man who does 400 should be considered much stronger than average.

Smaller men might set their sights on double-bodyweight, then 200 more than bodyweight. Anyone who can dead lift 300 lbs more than his own weight is certain to be the possessor of strong back muscles and a grip that won't quit.