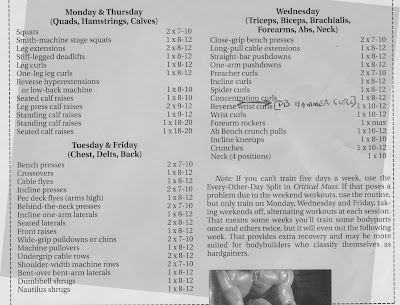 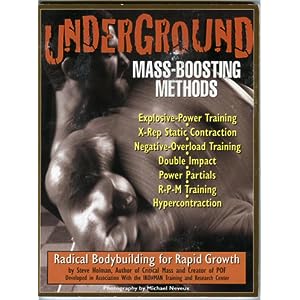 
If you've been using training program number one for four weeks, you're now ready to build on it with routine two. We want to minimize overtraining while keeping our calories up in order to gain size. Extra calories from nutritious foods can speed muscle growth, but try not to let your abs go into complete hibernation. Ann extra 200-400 calories a day over maintenance should be a good starting point, and you can easily get that amount without much trouble.


Another key to keeping growth coming is to change routines. That not only forces your muscles to adapt to new stresses, but it also keeps your training from becoming boring. One of the biggest mistakes bodybuilders make is to stay with the same routine for too long. As a result they get bored, just go through the motions and let fiber recruitment decrease due to their body's learning to leverage up poundages. A new program, even one with seemingly minor changes, keeps things fresh.

Train the muscle fibers' full length, with resistance every inch of the way. Rep speed should be our average 2 seconds up and 2 seconds down. No levering for higher poundages and if you hitch up the weight, you'll have to repeat the whole set. If you're not accustomed to lifting with this rep speed do a practice session of the exercises included, and use a timer until you get the groove smooth.

If you compare Program 1 with Program 2, you'll notice that we kept a lot of the same exercises; however, we moved from splitting up the positions over two workouts -- midrange and stretch at one workout, and midrange and contracted at the second -- to training all three positions for the target muscle at every session. Doesn't that make the workouts too long? It might, but we made an adjustment to prevent that: We train arms, abs, and neck only once a week on Wednesdays, so the new split is the following:

If you think your arms are going to shrink because you're only training them once a week, think again. Your biceps, triceps and forearms will get plenty of indirect work when you train chest, back, and delts, so essentially you're training arms three times a week -- once directly on Wednesday and twice indirectly with upper-body work. Also, you're working arms first on Wednesday so you can go all-out when you're fresh, which doesn't happen on conventional split routines.

While training the different positions at different workouts has its benefits, POF (positions flexion) training is designed to be most effective when you train the midrange, stretch, and contracted positions for each target muscle. For example, the POF triceps routine is as follows:

Midrange: The midrange-position exercise trains your triceps with muscle teamwork, which allows for more overload on the belly of the muscle. It's considered the big mass movement.

Contracted: The contracted-position exercise takes advantage of the heightened fiber activation of the previous exercise by placing the target muscle in its ultimate contracted state. For the triceps the position of complete contraction is the point at which the elbow is locked and the upper arm is down and slightly behind the torso. That position forces the most extreme contraction possible.

With these three exercises you work the triceps through its entire arc of flexion -- upper arm next to your head, upper arm perpendicular to your torso, and upper arm down and slightly back behind your torso. The full-range protocol can produce more fullness and complete development in the target-muscle structures.

In Program 2 you hit each target muscle through its full arc by training in all three positions, which results in a synergistic growth response from the muscle fibers. Using a midrange-, stretch, and contracted-position exercise for each bodypart every time you train is the number one factor that makes Program 2 different from Program 1. Of course, the split is also different, and there are a few new exercises.

If you can't train five days a week, (Monday to Friday) as suggested, you may want to substitute an every-other-day split. Workout 1 on Monday, workout 2 on Wednesday, Workout 3 on Friday, workout 1 on Sunday etc.

Jonathon Lawson: I really look forward to Wednesdays because we're training arms first. I get a much better pump and have a lot more strength for working arms. It feels great.

JL: Good idea, although mine are starting to look better lately.

SH: Yeah. Don't go too narrow or you'll tweak your wrists. Grip the bar a few inches shy of shoulder width and make sure the bar touches your low-pec line.

JL: You just couldn't bring yourself to say nipples, could you?

SH: . . . stiltskin. Wasn't that the name of the guy who slept for all those years -- Nipplestiltskin?

JL: Yeah. I think he had a bad case of gyno.
[They each do two light warmup sets and then two heavy sets with the same weight for each.]

SH: Long-pull cable extensions on the overhead cable. One set. Really make these slow and controlled, but don't pause in the stretch position. Fire out as soon as you activate the myotatic reflex.

*The stretch reflex; which is also often called the myotatic reflex, knee-jerk reflex, or deep tendon reflex, is a pre-programmed response by the body to a stretch stimulus in the muscle. When a muscle spindle is stretched an impulse is immediately sent to the spinal cord and a response to contract the muscle is received. Since the impulse only has to go to the spinal cord and back, not all the way to the brain, it is a very quick impulse. It generally occurs in 1-2 milliseconds. This is designed as a protective measure for the muscles, to prevent tearing. The muscle spindle is stretched and the impulse is also immediately received to contract the muscle, protecting it from being pulled forcefully or beyond a normal range. The synergistic muscles, those that produce the same movement, are also innervated when the stretch reflex is activated. This further strengthens the contraction and prevents injury. At the same time, the stretch reflex has an inhibitory aspect to the antagonist muscles. When the stretch reflex is activated the impulse is sent from the stretched muscle spindle and the motor neuron is split so that the signal to contract can be sent to the stretched muscle, while a signal to relax can be sent to the antagonist muscles. Without this inhibitory action, as soon as the stretched muscle began to contract the antagonist muscle would be stretched causing a stretch reflex in that one. Both muscles would end up contracting simultaneously. *

JL: Should I pause at the lockout?

SH: Just for a count, then get it moving again so you keep as much tension on the triceps as possible. Keep the negatives slow.
[They both do one slow, controlled set.]

SH: Let's hope they don't do a Hindenburg during our triceps pushdowns. We just had the place cleaned. We'll do one set with a straight bar, then one set with a cable handle one arm at a time so we can get our upper arms behind our torsos for a harder contraction.
[They do one set each of straight-bar pushdowns, then move to the one-arm pushdowns for one set.]

SH: Wait till tomorrow. I hope you can brush your teeth without screaming in pain.

JL: Lately I've been screaming in pain anyway, especially when I look in the mirror and notice my disappearing abs.

SH: Hey, they're still visible -- and you're looking a lot fuller. You can't gain mass with a reduced food intake. Let's hit preacher curls for biceps.

JL: I thought we were doing midrange movements first. Isn't that a stretch-position exercise?

SH: A common misconception, grasshopper, but I can understand your confusion. Your arms are out in front of your torso, so it's a midrange exercise, although the muscle teamwork is minimal and the pull on the biceps is more noticeable than it is with barbell curls. That's where the confusion comes from. We were getting more synergy with the barbell curls, our biceps midrange exercise in Program 1.

JL: So aren't barbell curls a better basic movement choice then -- because of the synergy?

SH: Not necessarily. Our bodies learned how to leverage the weight up, and the fiber activation was starting to decrease. Switching to preacher curls should kick in some new adaptation and keep the growth coming.
[They each do one warmup set, then two heavy sets of preacher curls with the same weight on both sets.]

JL: Next, we stretch 'em out with one set of incline dumbbell curls, right?

JL: So that's really the only strech-position exercise for biceps?

SH: Well, you could do seated one-arm cable curls, facing away from the stack and letting the cable pull your arms back behind your torso, but I prefer the dumbbell version. If we go stale on these, we'll switch.
[They each do one set of incline dumbbell curls to failure.]

JL: Big, bloated biceps. I love it. I just hope I don't have to pick my nose 'cause my biceps are too pumped to bend my arms that far.

SH: Which reminds me, don't look at your calves while your arms are pumped.

SH: Noh, we have to use Arnold's shortened pants strategy and be tormented by our calves at every opportunity -- so we can torture the hell out of them on calf training day, which is tomorrow. Here, let me start tearing down your self-esteem. Wow, are those calves or calf fetuses?

JL: Hey, was your dad a flamingo or did someone replace your lower legs with buggy whips?

SH: That should do it. Let's do brachialis. Two sets of dumbbell hammer curls.
[They do two sets, keeping the dumbbells moving simultaneously like pistons, with a slight pause at the top.]

SH: Premature forearm fatigue. You must have taken home the new swimsuit video.

SH: No, I just notice that your vision has been getting worse lately, so I assumed . . .

SH: Now one set of forearm rockers. Just let the dumbbells hang at your sides with a slight bend in your elbows, and try to wrist curl the 'bells up and out to hit the extensors and then in and out to hit the flexors. Keep rocking till your forearms flame out.

Next are ab bench crunch pulls.
[They each do one warmup set,then add weight a do a slow set of crunch pulls for about nine reps, with no pause at the stretch and a one-count hold at the contracted position.]

SH: Yep. One set, and then one set of crunches.
[They each do a set of incline knee-ups, with no momentum, rolling their hips off the bench and holding their knees at the chest for a count on each rep. Then they do regular crunches, emphasizing the top contracted position with a two-second hold while expelling the air from their lungs to enhance the squeeze.]

JL: It's amazing how three sets can do in your abs when they're done right. This POF is great stuff. You should get other people to try it. Why don't you write a book or something?

SH: Very funny. Next month we're going to crank up the intensity a bit with some supersets. Aftershock supersets can change the pH of the blood, which has been shown to increase growth hormone release.

JL: You're always thinking. Let's hit neck, and then we're out of here.