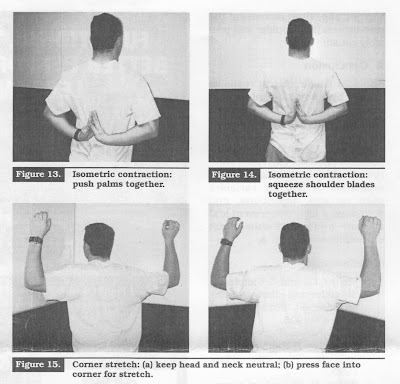 The Journal of Strength and Conditioning Research:
http://journals.lww.com/nsca-jscr/pages/default.aspx

The Shoulder and Heavy Squatting
by Jason D. Rash (2000)

The glenohumeral joint is made up of the glenoid fossa (a socket) of the scapula and the head of the humerus (the ball). The arrangement of the joint consists of a shallow socket and a humeral head, which is less than halfway in the socket at any one time. This allows for multiaxial movement in all three plains. The drawback to this arrangement is that because the fossa slightly tilts anteriorly and superiorly, the shoulder is susceptible to dislocations and impingement, respectively, as well as other injuries.

In the power squat, the bar rests on the posterior deltoids, accomplishing several things. First, this puts less downward pressure on the shoulders and and shoulder girdle. Second, this bar position forces the lifter into a more forward leaning position, thus increasing the angle of flexion at the hips and increasing the force production from the lower back and gluteal muscles, thereby increasing the total weight lifted. The downside to this bar position is the increased chance of anterior shoulder impingement and pressure on the long head of the biceps.

Impingement and the resulting pain can manifest itself in squatting and when performing the bench and/or overhead press. The dilemma is how to consistently increase the weight lifted while decreasing the chance and recurrence of an injury.

The approach to this problem is threefold: strengthening the posterior elements of the shoulder, proper stretching and warm-up prior to lifting, and manipulation of sets and repetitions of the power squat itself.

The muscles targeted here are the posterior deltoid, teres minor, and the infraspinatus. Excellent exercises for these muscles are the following:

Exercises 1 and 2 should be done with a small pillow or rolled up towel placed between the ribs and the elbow to allow for greater rotational motion of the humerus.

Later rotation (exercise 3) is more sport-specific because it replicates the actual position of the humerus during power squats. The rear deltoid extension (exercise 4) and the prone flye (exercise 5) work the posterior deltoid, which is an external rotator, but if also, if hypertrophied, will serve as a better resting place for the bar during a power squat.

Also, if the bar has a better surface on which to rest, there will be less shifting of the bar during execution of the squat. Since the primary external rotators, the teres minor and infraspinatus, have a downward angle from the humeral head to the inferior angle of the scapula, they can also play a part in the depression of the humeral head away from the acromial shelf. Therefore reverse shrugs (exercise 6) are also included.

All exercises should be done with very light weights (2-5 lbs.) for high repetitions (10-20) and in a slow and controlled fashion. This is done because of the small muscles involved and because form and technique are crucial.

An isometric exercise that has been used with good results is pictured in Figures 13 and 14. The forearms are placed behind the back with fingers touching. The palms are then pressed down and together isometrically contract the posterior shoulder elements. Start with 5 repetitions for 5-second holds and slowly increase the time of each hold

Muscle tightness can also contribute to shoulder impingement. Anterior thoracic muscular tightness due to overdeveloped pectorals and anterior deltoids when compared with upper back strength is the primary cause. The pectoral/corner stretch (Figures 15 a and b) with the forearms flat on the wall surface stretches the anterior deltoid, pectoralis major, and subscapularis. Including at least 3-4 sets of a warm-up exercise prior squatting and pressing, in addition to the previous exercises, can also help alleviate impingement.

In powerlifting, all that is required is one successful repetition, so multiple repetitions are not needed. Several sets of repetitions in the 1-3 range using weights in the 70-80% range done explosively from the bottom position allows the lifter to get many "first" repetitions with which to practice the initial foot positioning and setup of the power squat. [Simmons, L. "Percent training. What is it really? Part II. Powerlifting USA. 19(6):26.1996.]
http://www.deepsquatter.com/strength/archives/ls02.htm
This set and repetition scheme is recommended so that the lifter avoids multiple repetitions in which the bar can shift or slip, thus increasing the pressure on the shoulder and possibly causing injury.

Shoulder impingement can be caused by many different mechanisms. In this article, the concerns of the competitive powerlifter and/or power squatter have been addressed. By utilizing specific posterior shoulder exercises, anterior shoulder stretching, and manipulation of training variables such as sets, repetitions, and poundage, a lifter can prevent and alleviate injury and subsequent time off from training.