The Development of the Clean & Jerk, Part Eight - David Webster 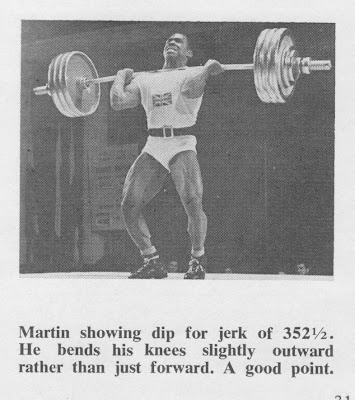 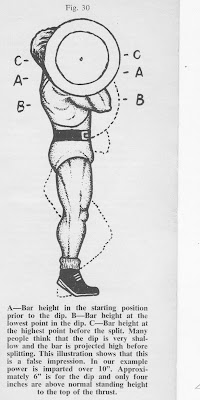 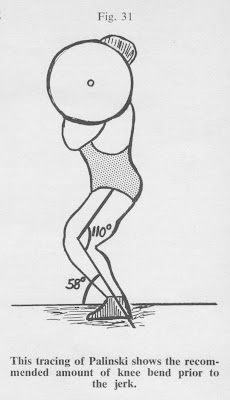 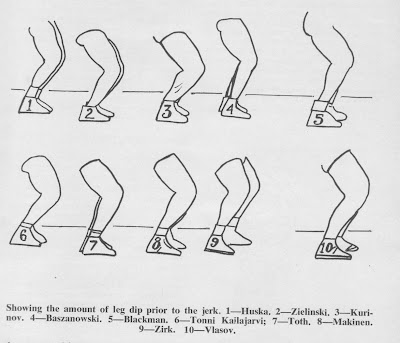 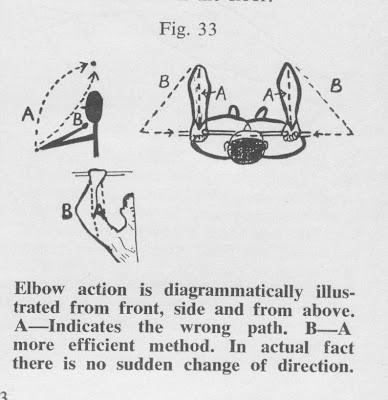 
The pause prior to jerking should be just long enough for the lifter to compose himself and adopt the correct position.

At the time of writing there are two main styles of jerking and these can be identified right from the bar at the chest position before the jerk. The arms give the clue. If the elbows are well raised, then the lifter uses the style where the initial leg drive does most of the work until the end of the lift. Plyukfelder of Russia is a good example of this style. The bar rests right on his fingertips as he prepares to jerk, and his hands only close round the bar at the end of the lift. The weight is taken entirely by his shoulders at the start of the lift and the drive from his legs is transmitted directly to the bar. As a matter of interest, I have often seen him SLIDE HIS HANDS along the bar as he jerks. This shows how little the arms work in comparison with his legs.

Those in the other school of thought have their arms much lower at the start of the lift. Their elbows are low as though they were going to do an "old fashioned" press. If you wish to do some comparisons of of lifters stand directly to the side of the lifters, imagine the biggest disc as a clock face and note the elbow position in relation to the time, as pointed by the hour hand; e.g., Plyukfelder's style would be nearer to 9 o'clock viewed from the lifter's left side, and the low elbow group toward the 6 to 7 o'clock mark.

The initial reaction of many coaches and lifters is to say that the legs are more powerful than the arms and they completely discount the latter technique. However, it should be remembered that the lifters use the legs in addition to the arms. They certainly don't cut out leg drive. Furthermore, many feel that direction is improved by this use of the arms as opposed to the 'mainly legs' style. This makes sense as, generally speaking, the smaller and lighter muscle groups are capable of finer and more precise movements. The muscles of the arms and the hands are capable of the most accurate movements.

You should aim at the dip prior to the jerk, going directly down and directly up. Almost without exception the top lifters keep their feet fairly flat on the floor as they dip. The heels may rise fractionally as you see in the photo of Louis Martin, but this we do not consider as rising on the toes. In all the world championship films I have made, only Huska of Hungary rises on his toes, but as I class him as the most unorthodox lifter of world caliber, we can discount this. Furthermore, it is only sometimes -- not always -- that Huska goes on his toes.

How much dip should be used?

This is a question often asked and it is a difficult question to answer. I personally feel that good lifters dip more than many people think and the sketches are pretty typical of how much good class lifters bend their knees prior to jerking.

Bill Miller, one of Britain's top coaches, maintains that as the weight increases the amount of the dip decreases. I have not been able to confirm of deny this from film analysis but pass this on as a statement from a man with a great fund of practical experience in coaching.

Chu Tse-Chiao, an instructor of the Shanghai Hsinhua High School, did some study in the dip for the jerk and his findings were that failures on the jerk were due not so much to lack of strength but to lack of technique (a statement I heartily endorse). He went on to say that beginning the jerk too early and not bending the knees sufficiently are two main causes of failure. For a nearly perfect jerk he recommended that the knees should be bent to an angle of 110 to 115 degrees. It is interesting to note that this fits in well with the physiologists view that 115 degrees angle between calves and thighs permits the most forceful extension of the thighs.

The calculations made by myself from numerous film tracings gave figures exactly in the category with people like Martin, Palinski and Ichinoseki at the 110 degree mark. Nobody I measured bent their knees more than this. Of the tracings recorded, Zielinski bent his knees least of all, going only to 120 degrees, while Vlasov was close with 117 degrees.

Maximum power must obviously be put into the drive after the dip and the aim should be to drive the weight as high as possible.

IT IS ABOUT THIS STAGE THAT THE GREATEST MISCONCEPTIONS EXIST. VERY FEW PEOPLE APPRECIATE THE HEIGHT OF THE BAR IN COMPARISON WITH THE BODY WHEN THE FEET BEGIN TO SPLIT.

THE MAJORITY OF TOP LIFTERS BEGIN THEIR SPLIT WHEN THE BAR IS JUST OFF THE CHEST AND ABOUT THROAT HEIGHT OR CHIN LEVEL AS THEY RISE ON THEIR TOES.

I have gone through scores of filmed lifts at world championships, world records, etc., to ascertain this fact, as I had never seen a statement in print, and I assure you this is correct, as I have been able to confirm this when conducting lifting courses and lectures.

Here are what some of my films show:

Schemansky, in several different lifts, began splitting when the bar was mid-throat height. On another occasion it was at the base of his throat. Palinski and Zhabotinski the same as Schemansky. Zdrazila commenced his split when the bar was just below chin level. I give these names to show just how common this is, although it has not, to my knowledge, been expounded in the past. Even Nemesyanyi, who does not split, begins to dip when the bar is at throat level.


As the legs split, the arm drive actually assists in pushing the body under the bar, as well as keeping the bar moving upward. The result is that in the fraction of a second from the lifter beginning to split at throat or chin height until the feet are landing, THE ARMS ARE ALMOST STRAIGHTENED! This gives some idea of the great speed of leading lifters. In a few cases the arms are actually straight as the feet land.

The feet SHOULD leave the ground at exactly the same time, but it is very seldom that this actually happens. The rear leg usually moves first and where this is exaggerated balance is lost.

The front feet should go about 1.5 to 2 foot lengths forward and the rear leg travels a little further than this in the opposite direction.

The rear leg should be well extended and there is quite a degree of flexion in the hip and knee joint of the forward leg, but even at its maximum the front thigh should not be horizontal.

You must land firm under the bar and apart from absorbing the impact you must not give to the weight. Firm legs will allow you to lock out and follow through, and this is better technique than trying to sink under the weight.

To recap:
your arms will be slightly bent as the feet land, but you'll be trying to force them straight. The shock-absorbing action will cause you to sink, BUT JUST A LITTLE, and this little bit is enough to allow your arms to straighten. The bar will thus remain almost in the same place as you finish the split. If you sink too much before the arms are straight the bar will come down on you.

Elbow action is seldom discussed in the jerk although there is a very good tip we can pass on here.

Sometimes the bar is thrown out in front during the jerk (more often than not the lifter moves backward, which is quite a different thing). If the bar goes forward it may be:

(a) a faulty dip and thrust, e.g., rising on the toes in the dip or bending the trunk slightly forward.
(b) bringing the triceps into play too soon, thus straightening the arms and taking the weight forward. The latter can, to a large extent be avoided and a more efficient action performed if, as the jerk is done, the elbows are brought from their forward position in front of the bar to a sideways position under the bar. This has been called the "open" jerk and I think that's a pretty good name for it. The opposite, I suppose it could be called a "closed" jerk, does tend to put the bar forward or the body back.

In the open jerk it is necessary to avoid whipping the elbows back too soon. In my opinion, and I must be careful to say it is formed on observation only, the elbows should still be forward during the leg drive and be brought sideways during the "flight." They will thus be ready to apply force as the feet come back in contact with the floor.

In jerking, the most common fault probably lies at the end of the lift. In contest after contest we see lifters get the bar overhead to arms' length but fail to hold it there. There can be many reasons for this, but in this case I don't think that lack of mobility or faulty balance, both of which are discussed elsewhere, are at fault. Very often the bar cannot be held because of positional faults.

Providing the bar has been jerked correctly, not forward or the lifter jumped back, THEN THE FOLLOW THROUGH IS LIKELY TO BE AT FAULT.

Look at the tracing in Figure 34. In position 1 the bar is relatively forward of the lifter's head and trunk. This is correct at the stage of the proceedings but it is a position which must be passed through at speed. So many lifters get to this position and try to hold the position as they adjust the weight and some even begin to recover. Position 1 is a transitional stage which should quickly change to position 2. You will see that the bar virtually remains static but the body moves considerably.

As was pointed out earlier, the body is lighter and more mobile than the bar and easier to move.

A FAST, FIRM FOLLOW THRU IS WHAT IS NEEDED.