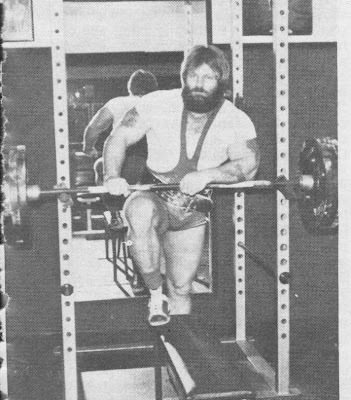 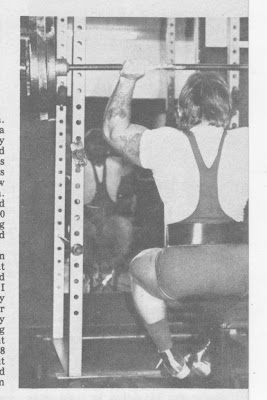 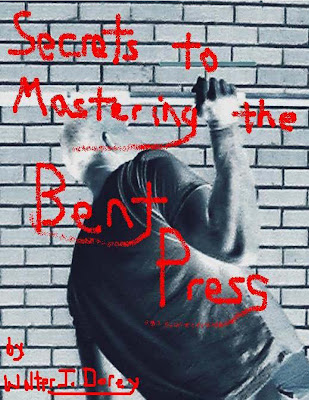 A Pressing Challenge
by John Myles (1981)

Note: Since first posting this article, I became friends with a powerlifter who trained around Roger Daggitt at Hepburn's gym on Hastings Street for quite a while. He confirmed the poundages and said Daggitt's pressing strength was incredible. His personality left something to be desired, however, and Daggitt made his living as a collector/enforcer/extortionist for various criminal elements in Vancouver. He met his end when an anonymous out-of-Province shooter was hired to kill Daggitt. He walked into the bar, came up behind Mr. Daggitt and put one bullet in the back of his head. The case was never solved.


In my 15-plus years associated with the weight game I have seen many great physiques and witnessed many great feats of strength. What you are about to read is an account of a new acquaintance of mine who I believe is possibly the strongest man in the world in the seated press behind the neck.

His name is Roger Daggitt and he hails from Vancouver, B.C.

Roger is 26 years of age and weighs a solid 245 at 5'11". He is currently pressing behind the neck in the seated position 330 pounds for 3 reps in his training program. His best single has been climbing steadily for the past few weeks and is now in the 360-370 area. This man has the potential of seated pressing behind the neck in excess of 400 pounds, and should his present training continue without interruptions he should reach his goal sometime next year.

I am not a weight-strength historian on the order of David P. Willoughby, but to the best of my knowledge a 400-pound seated press behind neck would be a world record. I doubt very much if any man in history has ever achieved such a lift.

Roger Daggitt began weight training at a very early age - 12 years - and has been training regularly ever since. He began doing front presses off a power rack and at age 18 front pressed 400 pounds. It was at about this time he started doing the seated press behind the neck to surpass a gym record set by a 280 pound football player/fellow gym member. He soon began to realize his great gift of natural strength in the shoulders. Only time will reveal how great that natural strength potential is.

Roger also uses 115-pound dumbbells for side laterals and does so in each shoulder workout. He also has good overall strength as indicated by an over 500 pound bench press, 470+ incline press and a near-700 pound squat. He has great strength in all bodybuilding exercises as well. Knowing Roger as I do, I would say he has all he ingredients and potential for making strength history in pressing movements. He has the perfect knack of knowing how to time and plan out his next workout and also possesses he drive and enthusiasm to blast through those heavy training sessions which roughly consist of the following:

Train 6 days per week. Bench presses, squats, back, trained twice per week and strangely enough, shoulders only once a week. His shoulder routine looks like this:

Roger feels that the use of training partner(s) is of great importance and his current training partner, Warren Campbell, is fulfilling the task very well by providing an atmosphere of enthusiasm and drive.

The world renown strength champion, Doug Hepburn, says of Roger's pressing abilities, "a phenomenon and probably the greatest lift of its kind in the world."

Roger here sends out a challenge to all to match his seated press behind neck poundages.