The Development of the Clean & Jerk, Part Seven - David Webster 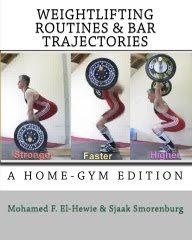 Lowering in the Clean


Some coaches and writers say that you must sink only as much as the weight necessitates. In other words, it's the weight that forces you down. They say that if the weight is light you don't need to go so low. On the other hand, other unqualified coaches say that the lifter should catch the weight at the chest and then allow the legs to bend a little more before checking the downward tendency. Both these assumptions are wrong.

When the feet land in the split or squat the lifter is not in a position to support the weight. The weight is just about at its highest point and beginning to drop. The lifter must therefore get below the bar as the weight drops and he must drop even FASTER than the bar in order to be in a correct position to receive the bar. He must travel faster than the force of gravity and the only way to achieve his aim is to continue pulling on the bar. This will have the effect of "pulling" him under the bar and also help slow down the dropping of the bar. Aim for continuing the pull and at the same time achieving the lowest possible position absorbing the impact as late as possible. Guard against misdirecting the pull at this stage. There is sometimes a tendency to flick of pull the weight backward and this can have disastrous results.

No matter how much the lifter tries to revolve his hands around the bar instead of incorrectly flicking it backward, there is always a bit of a hook as he turns over his wrists and goes under the weight. The bar never travels straight up and straight down the same path. The hook should be kept to a minimum and often this hook is increased as the lifter's feet land on the floor after splitting or cleaning. Those who "pull like a ballet dancer and drop like a horse" instead of the opposite are particularly guilty of putting a big hook on the bar and naturally, balance is greatly disturbed.

In both squat and split styles the vast majority of lifters break contact with the ground. We repeat: POWER COMES FROM THE GROUND, so the less time the lifter is in "flight" the better it is for him. The squatter has the advantage in this respect as he moves his feet a lot less. You may ask why the feet should be moved at all. The reason is that the lifter must get himself first in the best position to pull, then he must change into the best position to receive the weight at the shoulders. I QUALIFY THIS BY SAYING IT SHOULD BE THE BEST POSITION FOR RECOVERY.

Louis Martin's training in 1965 provided a good example. Louis was having a lot of trouble with rising from his deep squat. His feet were wide apart and knees wide. He could receive the weight well in this position but the recovery was difficult as foot spacings were altered to make the recovery more efficient. The late Bill Miller, Louis' club coach, experimented to find first the best position for Louis to receive the weight and then the position of the feet which suited him best for recovery. It was then a case of striking a balance which would get the best of both factors and this treatment proved effective. This is a typical example of how good coaches convert theory into practice.

Will YOU adapt the information given in this book to meet your own training needs, or are you content to use hit or miss methods.

There are numerous faults evident at this stage of the lift; so numerous in fact that a special section is being devoted later in this book to common faults and methods of correcting them.