The Development of the Clean & Jerk, Part Six - David Webster 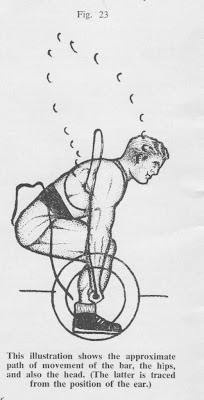 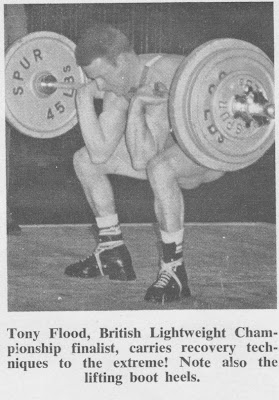 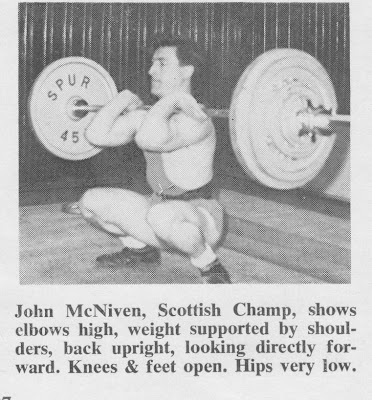 
This is the third of the easily recognized “key positions” and in order to maintain continuity we will have a look at the arm action in the pull and see how they should be when the body is in the fully extended position.

On analyzing a certain clean by Veres, I noticed that he pulled the bar much higher in the fully extended position than other lifters did, and I subsequently found out that he head pulled it higher than he normally does at this stage of the lift.

In most other lifters who display a similar position at full extension I would have no hesitation in saying that they had brought their arms into play too soon. You can try it for yourself in slow motion using an empty bar. As you are passing the thighs, begin bending the arms; now straighten up the body and you will find that as you are fully extended the bar is now at least belt height and in many cases even higher. This is, of course, incorrect summation of forces and although you have applied force over a greater distance you will not be able to apply MAXIMUM force in this way with top poundages.

However, Veres did not do this. A mere 1/8 of a second earlier he was in a good extended position, but like Kailajarvi often does, he kept his feet firmly on the ground (although his heels had raised), and kept on pulling with his arms although his leg force was completely expended and his back extensors nearly finished working. Veres’ lift was good. He had applied maximal force over maximum distance and for maximum time. He had lifted several inches higher and for 1/8 of a second more than most lifters would. However, coaches must be careful that they can clearly differentiate between a lift like Veres’ and one where the arms bend too soon; both look very much alike in the third key position. Before leaving this particular discussion I must add that in heavier lifts in the same competition Veres was more orthodox in his pull and this is understandable. If, for example, he pulled to such a height with 400 pounds, he should be able to pull 420 high enough to clean it! If Veres had Zdrazila’s and Zielinski’s ability to get under a weight, then I am sure he could squat clean 440 pounds!

In studying the fully extended position from the side, comparison of various angles will teach the coach a great deal.

Earlier we mentioned the extension line drawn from neck to the center of the base and the line of thrust from hips to center of base. We should now have a closer look at Table 1 and the factors which are involved.

The greater the distance the line of thrust is ahead, the better the extension, if it is a considerable distance behind the extension line then the lifter’s technique is very poor. The difference between the columns will give a fair indication of the standard of technique of the top liners listed. Before studying this in detail, however, there is another factor which should be taken into account. This is the actual angle of the line of thrust. We have emphasized the need for a good forward and upward hip thrust and if there is a good forward component then the hips will be brought nearly over the feet and this is what you must aim for. While in theory it may be ideal to achieve something closely approaching a 90-degree line of thrust, we know that in practice, cleaning poundages such as those used in world championships, anyone who achieves 100 degrees or less is doing pretty well. In the snatch, where the barbells are lighter, it is possible to get nearer to the vertical. Kaplunov, for example, did an excellent 95 degrees in the Snatch but only got 102 degrees in the Clean during the same competition.

The position shown in the fully extended position along with the amount of hip thrust will determine whether the lifter will manage to move forward under the weight of whether he will be forced to jump backward. Immediately after this position the lifter's feet will become un-weighted and as soon as the feet break contact with the ground THERE IS ABSOLUTELY NOTHING THE LIFTER CAN DO TO ALTER THE FLIGHT PATH OF THE COMBINED CENTER OF GRAVITY BEFORE THE FEET GET BACK ON THE FLOOR ONCE AGAIN. This is a very sobering thought. Your lift is largely decided this stage. Certainly splitters in particular can do a bit of juggling once the feet land again but if a squatter finishes a heavy pull badly you can expect the red lights to be flashed in most cases.

Newton's Law of Reaction is extremely important in lifting and it is an interesting exercise to go right through the three Olympic lifts showing how certain reactions should be eliminated and certain ones harnessed.

Newton's third law states, "To every action there is an equal and opposite reaction."

The pull of gravity is directly downward, but, as has been pointed out, the angle of the legs dictates the line of thrust. This is unlikely to coincide with the pull of gravity. The resultant reaction can be estimated by judging or measuring the angles, but of course the amount of forward or backward travel will also depend on the amount of hip thrust employed by the lifter. Some countries strongly advocate a forward hip thrust. In Britain a FORWARD AND UPWARD hip thrust is recommended and in some Iron Curtain countries it appears the upward motion of the body is all-important. If all other things were equal the first method would get the most forward travel, the latter the least of this trio. Of course if there is no emphasis at all, the lifter will almost certainly jump backward. Top movement analysts using theories of parallelograms of forces could work out accurately the amount of movement which would be used in the split of squat, however for the purpose of our discussions it is sufficient to point out these angles so that you can check up performances for yourself. Do try to eliminate backward jumping in the clean. The easy way is to use a good hip thrust, get as near the 90-degree line of thrust as you can and be sure the extension line is behind the line of thrust. Avoid simply bending back at the waist, thus taking the shoulders well behind the heels. THIS IS NOT A HIP THRUST EXTENSION.