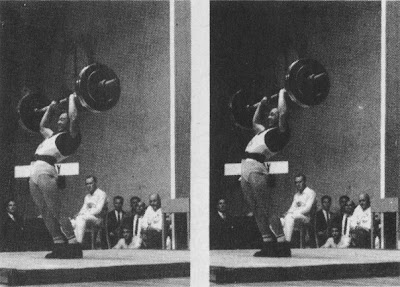 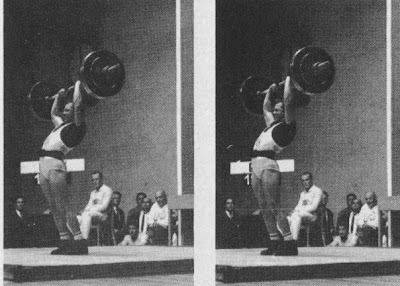 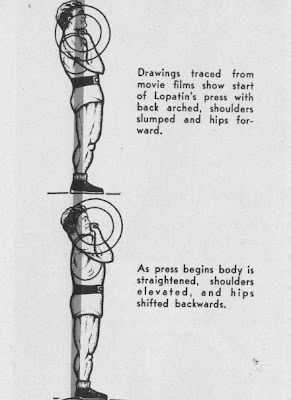 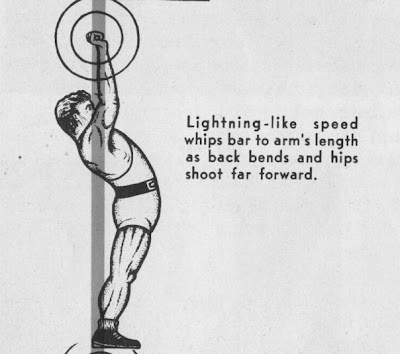 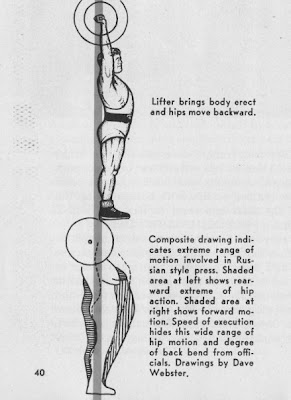 
When we first met the Russians, in 1946 at the World’s Championships in Paris, they had a pretty good pressing style. They held the bar on the chest with a rather wide hand spacing. They stood with raised chests and a moderate back bend. Kassianak, the featherweight champion of Russia in that distant day, claims to be the inventor of this method. I have seen Kassianak in Moscow on my last two trips, and he officiated both times.

With this pressing style Gregori Novak pushed the lightheavyweight record from an ordinary 253½, held during the war years officially by Gietl of Germany, to 308½ lbs. in the lifting in Paris in 1946. He broke the record a pound at a time, and received a lot of worldwide acclaim as well as considerable coin of the realm, rubles in this case, as the Russians pay well for each world record.

The Russians were good pressers and at times held some of the world records. Members of the American team have at various times held all the world records, also, but all of those records have gone, and most of the Russian lifters’ records too. The Hungarians learned to outpress the Russians, with what we would call a jerk press, so the bantamweight record is held by Foldi at 253½, the featherweight record by Foldi at 272, the middleweight record at 324 by Veres of Hungary, the lightheavyweight record, 341, by Veres. The Russians hold the lightweight record, the midheavy record and the heavyweight record. Vlasov, who somehow or other broke Paul Anderson’s world record by pressing 415, was unable to press more than 391¼ at the recent world championships in Budapest. I was one of the officials as Stepanov failed to make a world record in the mid-heavyweight class at Moscow a year ago, yet since then he has been credited with 351½, which has been accepted as a world record.

All of this proves just one thing – that a lifter who “presses without sin” cannot hold a world record. It has been said that in Rome, you must do as the Romans do. In weightlifting you must do as the Russians do, and the Hungarians, and a lot of others too, who have mastered this style of pressing. All of the members of the 1946 Russian team are still around. The middleweights of that team, Shatov and Bozhko, are the head coaches in Russia.

Pushkerev, who was the other lightheavyweight on that team of 1946, claims to have been the man who invented the present Russian style of pressing. The present style of Russian pressing starts, as they did in 1946, with a fairly wide hand grip, the chest raised, the body leaning back slightly. From this point, most of them move the weight overhead like lightning. The lifter straightens up a bit, and then drops back to pass the sticking point, and he comes up as the weight raises. Thus they lean back, push forward with their body, as well as their arms, lean back, and press the weight up. A good share of them have knee action, some smooth like Vorobiov used to do it, some rough like Plukfelder’s pressing of last year. Starting with the knees already bent, he would bend still farther and get the weight up with a heave of the knees and a jerk of the body. He received three white lights for a 308½ press, a 319½ press and a 330½ press in the 181 lb. class. I asked him what he thought he could press correctly, and he said 286½, but I think it would be as low as 264½.

Perhaps the officials have bad eyes, perhaps the lift is done so quickly that they cannot see the knee action, the overall body movement. Bushuev, who was a former world, and the last Olympic weightlifting champion, the lightweight of the Soviet Union who lifted against the American team in Chicago, Detroit and New York, was one of the first masters of this style. He would ram it up so fast that the officials could not see what happened. At Rome he pressed 275½ and totaled 876¼.

Soon Lopatin, 20 year old son of the Russian lightweight lifter who was beaten by Pitman, Kono and George back in the days when the Americans were winning world titles, made a world record press record of 292½. Even this record has been beaten, just as Bushuev’s total record was beaten with Lopatin’s 892¾, and at the last world’s championships Kaplunov, the hunter from Siberia, made a new world record of 914¾ in the lightweight class. The world press record in this class is just short of 300 pounds.

When Lopatin is about to press, he lowers the weight and sinks back slightly, waiting for the signal to press to be given; then suddenly the weight is at arms’ length. I do not believe that any present-day official could see what happens, that is, with the naked eye. I knew there was a lot of hip action, but the rules say nothing about hip action. I did not see any knee action as I could see with Vorobiov, Plukfelder, Stepanov, Vlasov and others. I did not see any leaning back after the signal to press was given, but like a shot from a gun, it went from the shoulders to arms’ length. Only with the Analizer, a new method of viewing athletes in action, five times as slow as slow motion, can you see just what happens during this explosive effort. There is at least an 18-inch movement of the center of the body, as is shown with the sketches accompanying this article.

Look at the photos of Lopatin carefully. You will notice that he is leaning back slightly, not nearly enough for disqualification; his knees are slightly bent, but again, not nearly enough for disqualification. Note that he has drawn his hips back, and that he shoots them forward. The legs are ten times as strong as the arms, the hips and legs are ½ of the muscular bulk of the body, so here you see a lot of help in the press, from the largest and strongest muscles of the body.

If the lean back in the third picture were assumed slowly, many officials would rule it out. At the Melbourne Olympics, Jim George, who at that time had not mastered this style, would bend back like a hinge, and was disqualified for his second two presses with 275½. He later learned to do better, smoother work with this type of pressing, and has pressed in pretty good form 308½ lbs. Something of a triumph for a man who certainly does not have favorable leverage.

If you had seen Lopatin press as often as I have you would think that he is pretty close to being the best presser in the world, and you would be doubly amazed then to see what the Analizer shows of his pressing style. As the lift is made, there seems to be no cause for disqualification, almost no noticeable movement, no noticeable back bend. The action is so fast that you cannot see it, but the pictures show just how much movement there is.

As I said before, it is no longer possible to place high in world championships by pressing without sin. Tommy Kono made one of those presses without sin at Budapest with 330½. But you will notice that even Tommy, a smooth presser, puts his hips back as he is ready to press and brings them forward into a more favorable position.

This style has been adopted all over the world. It can be done smoothly enough that no official can turn such a press down. At Budapest, the Russians in particular were amazed as they saw Tony Garcy press 275½ to a three-white-light success. They asked if all the Americans pressed that way. I had to admit that all did not, but we are trying to. Not one of our team was turned down on a press except Gary Gubner with his second press with 380¼, which was definitely a back bend, but he took it again and got a success. Our fellows made tremendous presses – 314 for Gary Cleveland, 325 for Bill March and 402½ for Norbert Schemansky.

Tony Garcy spent his summers in York, before he came here permanently as a high school teacher. He ran the films time after time as he watched Bushuev in particular press, and he finally mastered the style. He pressed 290 while he weighed 154, just before the Olympics. After the Olympics he did not lift for a year, as he wanted to complete his education, but lifting was back in his blood so now his ambition is to win the Olympic title in his class at Tokyo. That will take a lot of lifting, but I feel sure that no one in his class will outpress him at Tokyo.

Others of the American team are making progress with a correct version of this style of pressing, for it is not the intention of officials in this country to pass jerk presses. Floyd Spirito is one of the best with this style, having pressed 290 as a middleweight. Bill March would press this way to about 310, and then just stand and push, which caused some disqualifications as there is usually a noticeable lean back with a slow press. But now he is mastering it better every day, so that his 343½ press made recently would have passed anywhere. I believe that Bill will reach the world record in his class. It is essential that American lifters master this style in passable form, for it helps a lot in weightlifting competition to go ahead in the press. The time has gone where a poor presser can come through to victory in the snatch and clean & jerk, as Pete and Jim George would do with their world record ability in the quick lifts. Now you have to be a star in all three lifts. So study the pictures, and learn to do likewise.