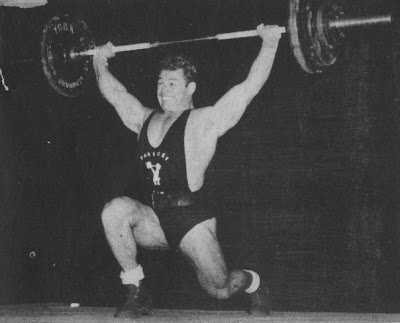 How do you gain bulk? This is probably one of the most discussed questions in physical culture circles, and there have been hundreds of books and articles written on the subject.

Now I have been around this business a long time, and in my time I have seen many a man gain weight – some too much and in the wrong places! And I’ve seen others breaking their backs without results.

So I ask myself, “Why is it people crave this bulk in the first place?” There are too many fellows who spoil the looks of their physiques by gaining way too much weight indiscriminately. I can’t help agreeing with my friend John Grimek who said, the last time he visited us in Oakland, “You know, Ed, a well-developed 15 inch arm looks much more impressive than a hammy 19 inch one.” I have noticed that the fellows who win most physique contests are the ones with the most muscularity. Naturally, you have to have size to have a shapely, defined physique, but how do you know when to stop gaining bulk? At what bodyweight do you look the best for what you aim to do?

The same applies to the weightlifter. It would be folly for the man who plans to lift in a certain bodyweight class to deliberately “bulk up” to the point where it would weaken him to reduce to his most efficient lifting weight. The heavyweights, of course, can afford to carry as much bulk as they need for power, but must keep from getting too heavy and losing agility and speed required in the quick lifts.

Now some guys, like George Eiferman and John Grimek, seem to be more muscular as they put on weight. They are exceptions, however, for most men who strive for bulk become “round” and lose every bit of definition. Sure, it’s wonderful to brag about a 19” arm, a 50” chest and a 28” thigh, but it doesn’t mean anything if they’re accompanied by a 45” waist and mainly composed of soft, adipose tissue,

Take, for example, the case of Roy Hilligenn, Mr. , 1952. started training in 1942 weighing a mere 83 pounds, after two years of serious illness. He weighed 160 when he won the Mr. South Africa title for three consecutive years. And last year at the winning of Mr. he weighed only 178 pounds. He also became the only man to win both the Mr. America and Most Muscular titles in the same contest.

In these contests there were fellows weighing 200 and more, and many had bigger measurements. So you see, the tape measure doesn’t mean as much as you may have been led to believe. Only a beginner should record his gains by inches, and that just to give him early motivation until he knows better. Symmetry of physique and strength in lifting are the main factors. Bulk must be combined with proportion and structure; bodyweight gain should yield strength and power.

To achieve the combination of bulk and muscularity does not mean that you should overstuff yourself, or that you should spend six hours a day in the gym sweating it out.

There is great truth in the axiom, “One man’s meat is another’s poison.” It takes careful planning to work out a bulk gaining routine. The best way is to experiment with yourself on every author’s opinion of such a course and finally work out your own program that will suit your individual needs.

I know for a fact that Roy Hilligenn can gain 30 extra pounds in two months if he trains on a course consisting of a few main exercises done in 4 sets of 15 to 20 reps. On the other hand, Jack Delinger, Mr. America, 1949, gains by using similar exercises but much heavier weighs and lower repetitions. Each man determined on his own what kind of routine or combination of routines worked for his particular needs.

A lot of men believe the best way to gain muscular bulk is to stick to heavy weight and do no more than 5 repetitions on each set – and this arrangement can work for some. It doesn’t always work for everyone, so if the lower rep sets don’t produce much at this time for you, try lighter weights and higher-rep sets. A combination of both schemes may be what you need for now. Never write off an idea – store it for later and utilize it when the proper time arises.

Get plenty of rest and relaxation, and remember, eating is important for success in bulk gaining. Eat three to four sound meals a day, Get plenty of rest and add a few snacks if necessary. For heaven’s sake, don’t go gulping quart after quart of milk. Now I am a big man myself, standing 6-4 and weighing 250. I drink two or three quarts of milk a day and when I order a half-dozen eggs for breakfast, people stare at me. Maybe that is too much, but I feel that my body can handle it. The average weight man seeking to gain, the man perhaps 100 pounds less than I, needs only a couple of eggs and a quart of milk a day. Once he has increased his muscle mass, and only then, should he add to the quantity of his daily food intake. Don’t think for a minute that your body will simply turn excess food into muscle in a short time. It is a complicated process, one that takes time. You should have plenty of substantial, wholesome food, especially dairy products such as cheese, milk and yogurt. Balance your meal for best results, but remember not to go overboard when seeking added muscular weight. Eat fish at least once a week, as well as liver, beef, ham and steaks. Include green and yellow vegetables in your diet, as well as fruit, nuts, cereals, beans, etc. Eggs, peanut butter, yogurt, etc. mixed with milk and protein powder will help you add nutrition to your diet, no matter how busy your schedule.

But don’t think for one minute that eating and training cannot be overdone. You can overdo both. If you overdo training, you will tear your body down and if you overdo eating, you will find you have become soft, flabby and sloppy.

Three training days per week may be best for you, two days for some, and four or five for still others. It is up to each individual, over time, to find what combination of training and eating works to fulfill his aims and desires.