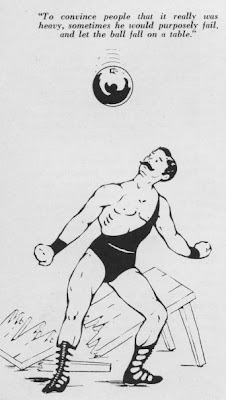 Cinquevalli
by W. A. Pullum

It is said of some men that they were born great; of others, that they won to such eminence by achievement. Of the great Paul Cinquevalli it can be said his name is on both registers!

To know Paul, one must first know Valli, an Italian trainer of tumblers and acrobats extraordinary. Valli, like all good men at this branch, believed in getting his material young. To do this, he periodically traveled a good bit of the world, being familiar with most of its capitals.

At the time that this story commences, the preface to a project he had in mind was nearing its consummation. Explained, this was the discovery of five youths who could bee trained into super-performers. His eye for latent talent had already lighted on four. Now he was looking for the fifth.

In , he found the boy Paul, and knew that his search was over. A dreamy mystic was this child, with large, wondrous eyes in which gleamed the lambent flame of genius. At least, so thought Valli as he gathered Paul unto himself. How right he was, we shall see!

Back in , the training of the selected five began and progressed. Time passed, and eventually their mentor decided that enough of it had to market his creation. Casting about for a suitable title for the act, he finally fixed this with his own imprint. So were launched “The Five Vallis” to an immediate and expected success.

The years went on, and Paul had won to the leadership of the act. In a group of the most extraordinary talent, he was seen to be a scintillating star. Graceful, daring, amazingly strong, all his work was marked with uncanny skill. His stage presence, too, was remarkable. Deportment, actions, smile – all had the same magnetic touch.

Paul, though, was still young, and no wiser, in some things, than his years. With all his skill, he secretly exulted in the strength he also possessed. Whereby came what appeared to be a disaster. Trying something once which came within his province as “bearer” in the act, he shook, staggered, then collapsed. Obviously in trouble, when examined afterwards, he was found badly ruptured.

His career seemingly finished, actually it had not really begun. For out of this misfortune, aided by a great spirit, rose Paul Cinquevalli, probably the most wonderful juggler the world has ever seen. To live up to that title, he was not content simply to work wonders – as other contemporaries also did that. Paul Cinquevalli seemingly worked miracles!

As he sojourned in hospital after the operation, downcast by the blow that Fate had dealt him, he mused upon what he could do on the stage when his hurt had mended. For he knew himself to be now a true child of “the footlights,’ the world outside possessing no glamour at all. Temporarily he toyed with the idea of becoming an outstanding instrumentalist, for he was a most accomplished musician. Continuing reflection, he finally rejected this in favor of becoming a juggler, leanings toward which he had already shown by mastering the elements of the art.

Recovered, he set out on his path, resolved to carve his way to the top of his new profession. With the genius that was truly in him, it was written that he could not fail.

Identifying himself with his old mentor and associates by adopting the name of Cinquevalli, Paul speedily showed that he was not only mindful of the earlier days, but that those to come would prove a crowning sequel. I have been able to supply the Editor with a few illustrations of this wizard-juggler performing. They portray some of his most extraordinary feats!

In all he did Cinquevalli was daringly original. Take his great billiards cue performance, for example. On the butt-end of an ordinary cue he would first “set” one billiard ball, then, on top of that, set another. Into a socketed mouthpiece held in his teeth he would then place another billiard ball, on to which he would then place the tip of the cue, still balancing the two balls, one on top of the other, on its butt-end. Indeed, also in fact, a wondrous feat of skill.

This, however, was not all! Attached to a special coat he wore for this feat, which he designed himself, were four “cup-pockets,” one at the side of each shoulder, the others fitted at its back and front. After maintaining everything under control for a few seconds, he would then knock the cue away and catch the falling balls in three of the four pockets. Seldom, if ever, did he fail.

Balancing two steel tubes upright on his forehead, a glistening cannonball on one – “rocked” over afterwards to the other, without the first one falling – was yet another of his miraculous feats. Spinning a large, flat tub on a high pole overhead, knocking the pole away and catching the tub as it fell dead in the center on a spiked helmet he wore, was yet another in the same category.

He loved juggling with gleaming cannonballs, as they reminded him of his strongman days. After erecting a heavy one overhead balanced on a slender steel shaft, he would drop it and catch it at the base of his neck. To convince people that it really was heavy, sometimes he would purposely fail and let the ball fall on to a table behind him. When it did, this table was always smashed.

After performing other spell-binding feats, he would raise aloft a man seated on a chair, reading at a table. By an ingenious method of counter-balance, he would hold the lot by his teeth and walk off slowly – meanwhile juggling with three or four balls at once.

Cinquevalli died just as he had finished playing the piano one night to a friend. Among other things, he left £27,000.