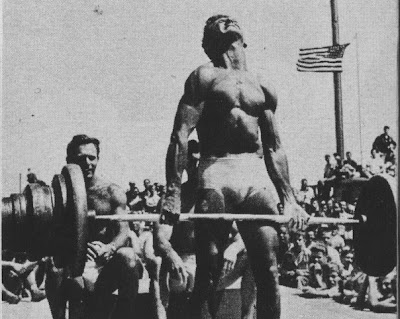 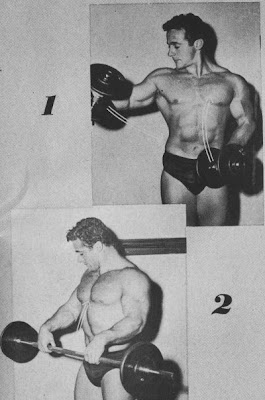 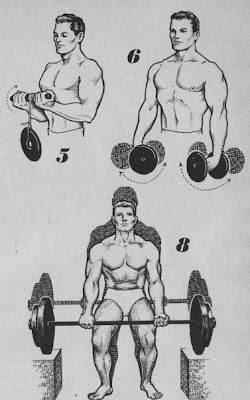 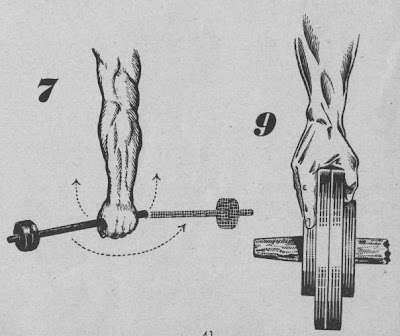 It’s strange the way certain ideas about bodybuilding take hold, grow in proportion and become accepted as being true with the passing of time. Particularly is this true when it comes to distinguishing between “receptive” muscles and “stubborn” muscles.

The bodybuilder today gives only incidental thought to his pectorals, lats and biceps. It’s mighty hard to see any advanced lifter who does not have these sections highly developed. But more than one bodybuilder, including some really advanced men, are quick to admit that they have trouble with their forearms and calves, and that these parts are “stubborn” when it comes to growth.

I feel this is a throwback to the dark days of bodybuilding, when it was a struggling infant and not the mature science it is today. Even the earliest bodybuilding programs offered plenty of work for the upper arms, chest and upper back, with direct forearm and calf training being ignored or neglected, with the result, excepting the few . . . the old timers were notorious for their slender forearms and calves.

In fact, a 14” forearm was considered as being a rarity only a short while back. I recall reading about a posing and lifting show Sig Klein promoted about 15 years ago, in which one of the star attractions was a pupil of his who owned a pair of 14” forearms. He stood under the posing lights, displaying his forearms in various poses to the amazement of the audience.

Today, 14” forearms are comparatively common. Still, the old-fashioned belief persists – that they represent a stubborn bodypart. Maybe they are a bit more stubborn than the upper arms or pectorals, but certainly with proper attention, every bodybuilder can develop them to a larger size and more muscular form.

It is in this phrase “proper attention” where the key to forearm strength and development lies. Ask the average bodybuilder who complains about stubborn forearms “WHAT” he is doing about them, and he will answer . . . “Just about everything!”

Get him to be more specific, and it will be discovered that he is relying solely upon a wrist roller, reverse curls and maybe two more forearm exercises AT THE MOST in his training. He admits that the forearms are a stubborn part, still he does LESS for them than he does for his upper arms, chest or back. When they don’t grow in strength and size he becomes discouraged and often cuts down on even this small amount of forearm work, devoting more energy and attention to other parts which respond more readily. He is sure that his forearms will not grow . . . and of course they won’t with this limited attention.

Malcolm Brenner hit the secret of forearm training pretty much on the head when he was approached by a young enthusiast, who, looking at Malcolm’s forearms and comparing them with his own, asked Malcolm, “What exercises can I do to increase the size and strength of my forearms?”

Malcolm smiled and answered, “The best exercises you can do for your lower arms is ALL OF THEM.” The kid nodded, thanked him and walked away. Maybe he got it and maybe he didn’t, but Malcolm had just given him a million bucks worth of advice.

Unlike other bodyparts in which it is possible to bring about an overtrained condition from overwork, the forearms can not be overworked. Mankind is anatomically constructed for manual work, work in which the hands wrists and forearms are used a lot. The strapping and interweaving of tendon, bone and muscle which composes our lower arms makes this part of our body a potential source of great power and unlimited endurance. The way the hands, fingers and wrists can be rotated, moved side to side and up and down is concrete proof that they were meant for a tremendous variety of movements and that any developmental process MUST take this fact into consideration. The network of tendons and sinew which composes them is also proof that our hands and forearms were intended by nature to be practically tireless and capable of continued use over long periods of time. Therefore, the BEST forearm exercises are those which cover a huge variety of different movements, and a generous amount of time must be allowed to the training of them each workout.

That was what Malcolm Brenner meant when he told the young fellow to practice ALL the forearm exercises. He knew that only in this way could maximum development and strength be achieved. The same advice DOES NOT hold true for other parts of the body. If you tried to perform this number of exercises for the upper arms, thighs, chest or back and so on, you would soon become overtrained and fail to improve. Only in the calves is a similar comparison possible - for these too are capable of tremendous exercise without overtraining.

There is another fallacy which must be discounted in this discussion – that of the relation of bone size to forearm size. While it is true that a man with big wrists can generally get more forearm size than one with smaller joints, the difference is not too great. In fact, because of his smaller joints, a bodybuilder with a slender wrist will possess A MORE IMPRESSIVE forearm if it is fully developed.

And don’t ever let anyone tell you that you can’t develop a powerful grip with a small hand or a slender wrist. One of the outstanding grips in the world belongs to Johnny Davis, who has a hand that could fit into a woman’s glove and the gripping strength to walk a couple of blocks holding a pair of thick-handled 100 lb. dumbells in his hands at the thighs. In pinch gripping, he plays with a pair of smooth surfaced 35 lb. plates, gripping them together and tossing them from one hand to the other in midair like they were made of so much wood.

There ARE no handicaps when it comes to developing a massive forearm and a powerful grip . . . unless you cook them up in your own mind! If you give the forearms the attention they need, you cannot fail in making them larger and stronger.

One feature about forearm training is that it is not really hard work, relative to large muscle group exercises and lifts. Not hard work in the way you look at squats, deadlifts, cleans or even heavy bench presses. In most of the exercises you use comparatively light poundages and the effort is restricted primarily to the forearm region. However, if you are performing the exercises right you should feel a great burning and pumping up action. You MUST feel this if your forearm training is to be successful. Only in this manner can the exercise influence be felt in the tough fibres of the forearm and results be obtained.

Since the forearms need and respond best to a lot of exercise, I have found it best to perform my own forearm training right after my upper arm exercises. When upper arm exercises are performed there is always some forearm stimulation that serves to warm up the area before the actual work begins.

Here is how to follow this forearm program – perform ALL the exercises included in it, in the order they are listed. Use a weigh which gives you a good workout but still permits you to perform 3 sets, 15 repetitions each, of each exercise.

Do not rest too long between the sets or the exercises. Just as soon as the aching feeling subsides, begin the next set. Don’t be afraid to work hard, to push yourself – and don’t worry about overtraining. You can do all the forearm work you want, and that can ever happen is that they will grow larger and stronger. Here are the exercises to follow:

Exercise 1. Zottman Exercise –
Hold a pair of light dumbells at the thigh. Curl one dumbell to the shoulder. Now, turn that wrist out, and away from you, and lower the weight with an overhand grip. While doing so curl the other weight to the shoulder. Keep the movement rhythm smooth and steady. Illustration No. 1 shows this.

Exercise 2. Reverse Barbell Curl –
Hold a barbell at the thighs, with a knuckles-front over-grip. Now, start curling the barbell, but permit the wrists to drop down while doing so, as shown in the illustration No. 2. After the weight is nearly completely curled, raise the wrists and finish the movement with them near the shoulders.

Exercise 3. Reverse Curl with Dumbells –
This is performed the same as the last exercise, except that two dumbells are used instead of a barbell. (Illustration No. 3)

Exercise 4. Dumbell Wrist Curl –
Start with dumbell in one hand, wrist dropped down as shown in Illustration No. 4. Now, without moving the arm, curl the wrist up and in as far as possible. Repeat equally with each arm.

Exercise 5. Wrist Roller –
Illustration No. 5 shows how the weight is rolled up on a wrist roller using an under grip. You can also perform this exercise using an over-grip and both styles should be used in each workout.

Exercise 6. Standing Wrist Curl –
One of the finest exercises to flush up the forearms and strengthen the grip is to hold a pair of dumbells in the hands as shown in Illustration No. 6. Then, as quickly as possible, twist the wrist back and forth until the forearms ache. In this exercise DO NOT follow any specific number of repetitions . . . merely continue the movement until the forearms are aching from the vigorous stimulation.

Exercise 7. Leverage Exercise –
You can load up a dumbell with plates only on one end as shown in Illustration No. 7, or use a leverage bell which is made expressly for this type of forearm movement. Hold the bell in the hand as shown and then move the wrist up and down against the leverage. This can be performed with bell pointed to the front as well as with the bell pointing rear.

Exercise 8. Forearm Deadlift –
In this exercise you are to HOLD a HEAVY barbell in the hands, after it has been lifted in a dead lift position. Use a couple of sturdy boxes to raise the weight off the ground so that you will be able to lift a really heavy poundage, as shown in Illustration No. 8. Then, once you have lifter the weight, JUST HOLD IT, until you feel your grip weakening and the weight is about to drop out of your grasp. This is one of the best grip and forearm exercises known.

Exercise 9. Pinch Grip –
For your final forearm exercise, practice pinch gripping as shown in Illustration No. 8. Load a few plated onto a dumbell bar as shown, and practice pinch gripping with them, just lifting the weight off the ground and holding it for a few seconds. Practice equally with both hands and as you progress in strength and endurance following the first 8 exercises, add plates on the bar for added resistance.

If you will give this forearm program a fair test for a good number of weeks, I feel certain that you will revise any previous ideas you had about the forearms being a stubborn area to develop. Just try it and see for yourself.