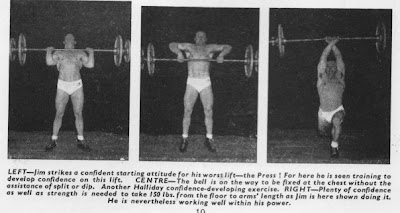 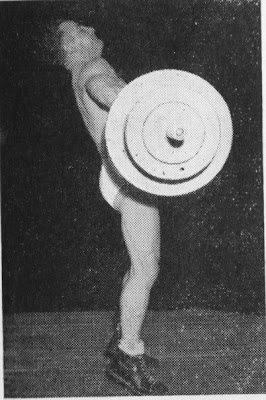 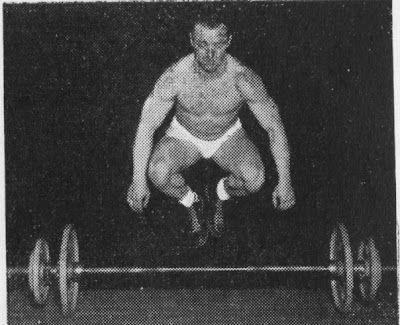 Confidence is Half the Battle
By W.A. Pullum

Confidence, ‘tis said, is half the battle, and as this relates to supreme achievements at weightlifting, certainly this is so. To expect to do a thing, whatever it may be, sets to work the powers which make it possible under the best conditions. Frees them from the shackling handicap of half-hearted endeavour, brought about by fears of hesitating uncertainty – products of an indecisive outlook!

Confidence to the extent of expecting success in the performance of a weightlifting feat is built, in the first place – or it should be – on factual knowledge subconsciously operating; knowledge that all bodily positions going to be assumed are automatically dependable. It then proceeds from belief – a state of mind arising from appreciation of apparent physical powers possessed at that moment, computed from the “feel” of the weight. Assuming technique dependable, this is the deciding factor. If the weight feels “liftable” it CAN be lifted. That is a factual presumption!

As we are dealing now with matters of the mind, it is instructive to remark that all the greatest champions and record breakers that I have known, were (or are) men who never allowed themselves to be hypnotized by poundages; that is to say, to be intimidated by the figures of the weight. The only thing that influenced them was how it felt, according to their powers of the time. Because of that, they seldom attempted feats which were beyond the bounds of possibility. For the really great champion lifter is not prone to kid himself. At least, not when “on the job.”

Confidence has several aspects which are worthy of study. It not only manifests itself in the form of competent self-assurance, as this may be displayed in connection with the essay of some great weightlifting feat. Determination eventually to succeed with that feat, when it is first envisaged, can build itself on an innate belief that the feat is ultimately possible. Confidence can also be the feeding force all the time responsible for the sustainment of staminal morale. And without question, it plays a great part in the establishment of that particular faculty which I have dealt with in the past – the sense of balance!

Confidence, in all its aspects, is a valuable possession, as by its use great achievements become possible in all walks of lift. And no man has a better opportunity to develop this faculty within himself than the thoughtfully reasoning weightlifter. As many men have discovered to their advantage – not confined to champions at that! This psychological byproduct of its practice is one of the things which makes the Iron Game such a fascinating pursuit.

The first of the five pictures illustrating this article is an example of how one thoughtfully reasoning weightlifter successfully creates confidence within himself for an attempt on something which otherwise would little or no confidence backing the effort. It is a photograph of Jim Halliday about to essay a Press – a lift on which he does not shine because of structural handicaps. Study his position and general bearing, and it will be seen by anyone who understands these things that they represent confidence personified. That is because Jim has positively “willed” himself to a confident outlook, and the position he has taken up not only depicts this, but, as he knows – no one better – will assist him as far as this is possible.

Just as it is very difficult for some great actors to be really anything but themselves, no matter how they are cast – their individual personalities being so strong, their various idiosyncrasies so marked – so it is equally difficult for an experienced lifter to manufacture a belief that his powers are greater than they would seem to be, and confidently proceed on that assumption. Determination may impel him to try to make the superior essay, emotional stress (by its excitation of the nervous system) may temporarily supply the additional force and drive to make it possible. But it won’t proceed from possibility to certainty unless a supremely confident belief is held in mind that the latter IS GOING TO BE SO!

Halliday has done such astonishing things in weightlifting – under the most adverse conditions possible to conceive – that an examination of his methods (so far as these can be legitimately be disclosed) is evidently well worth while. One has only to remember the base from which he restarted lifting after the war – 3 ½ years in a Japanese prison camp – to appreciate that these methods must be worthy of study, considering what they have since done for him, not only in the lifting sphere but the bodybuilding one also.

Jim is a great believer in the practice of special “assistance exercises” for everything that comes within the orbit of his activities; that particular type of exercise which I designed and so named in 40 years ago or more (-1910). It would therefore be very strange if one found that in his curriculum there were not some included for the promotion of the confidence factor.

Regular practice – when he IS able to practice, that is – of the position shown in Fig. 1, allied with the state of mind discussed, is one of them. So is the movement shown proceeding in Fig. 2, which is the “high pull in” (clean) without split, the bell being fixed at the chest with only a slight “give” at the knees as the heels come back to the ground. Jim has reached a very high poundage in this exercise, and it is this exercise, as much as anything else, which has made him so confident and powerful a performer on the heaviest of the Olympic three.

Jim has another favorite for developing confidence, which is all his own. This is his commendable penchant for correctly lowering weights which he has jerked overhead, first to the chest, then to the ground. Fig. 4 shows the bell just having been “turned off” the chest (note its height from the ground and the distinguishing angle of the arms). Fig 5 showing what invariably happens when he releases hold of the bell after it has been lowered in this special way – the agile recoil action which has caused him to be alliteratively called “Jumping Jim”.

Fig 3 shows him performing another confidence developing movement, a “crossed hands” Snatch, first shown in this country by Hermann Goerner, the 17 stone, 7 pound German strongman who was placed in my hands for management by Tromp van Diggelen, who had made his acquaintance in South Africa. The weight of the bell Jim is using in the photograph is 150 lbs. He is capable, however, of more that – for he has the confidence, as well as the strength required!