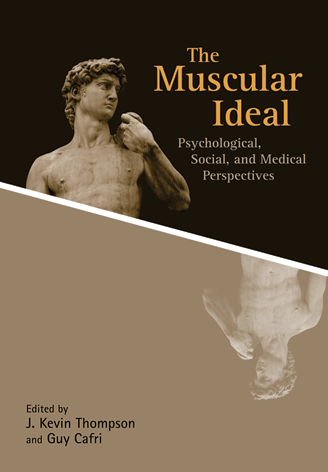 Excerpt from "The Muscular Ideal: Psychological, Social and Medical Perspectives" [2007]

Alan Klein is also the author of "Little Big Men: Bodybuilding Subculture and Gender Construction" [1993]
https://books.google.ca/books?id=z-ax2426Kw0C&printsec=frontcover#v=onepage&q&f=false
SIZE MATTERS:
CONNECTING SUBCULTURE TO CULTURE IN BODYBUILDING
Two years ago, I shared a room with my graduate student at a conference. A former collegiate hockey player, he was not overly macho, yet he embraced athletic masculine ideals that included many bodily practices such as workout out to retain "the look" and assuming closely cropped hair which was common to collegiate hockey players of the time.

An hour of so after he went out for the evening, I walked into the bathroom and was jolted by the scene: The bathtub was caked with dry shaving cream and hair; short stubbly hairs were everywhere. When I asked him about it later, the student matter-of-factly described what he was up to . . .

Any attempt to demonstrate the relationships between a subculture and mainstream culture should proceed from the ethnography of muscle production. The social settings, behaviors, and language that make up bodybuilding ironically reflect a cohesiveness born of both repudiation and slavish imitation of the larger society; members of this community simultaneously desire to be accepted by mainstream society and engage in behavior that destances them from it.