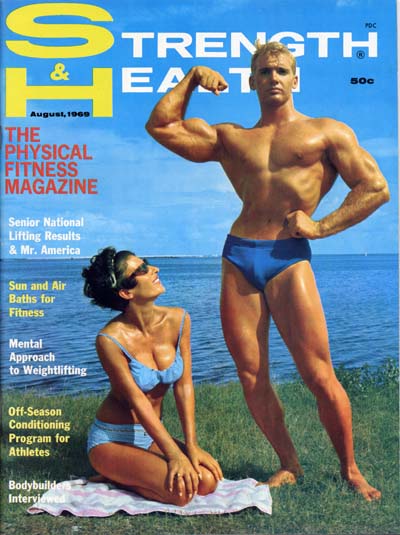 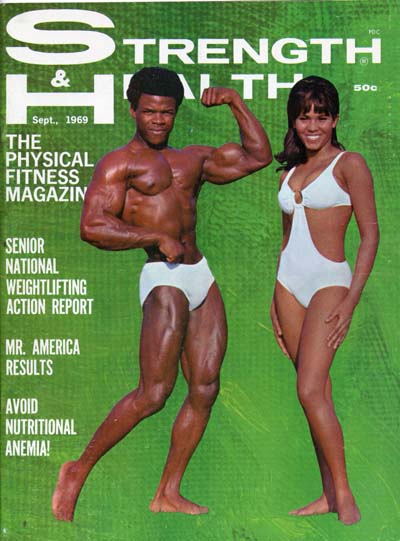 Originally Published in Two Parts in These Issues (Aug. and Sept. 1969)

Question: You continually stress the necessity of working hard with heavy weights. You state repeatedly that hard work is a must for effective gaining. Yet, I know of a title-holding bodybuilder who doesn't work hard at all. He trains easy and makes fabulous gains. How come?

Answer: The information in the Keys to Progress series is geared towards helping the average trainee. That's the gentleman who needs help, the guy who has trouble gaining, who sweats buckets for every fraction of an inch and lies awake at night wondering if it's all worthwhile. For him, hard work and heavy weights are essential. He won't gain without them. He's got to shovel coal every foot of the way, and anyone who tells him different is lying to him.

A few people, however, are more fortunate. They're different from us lesser mortals. They're what we call easy gainers and they're luckier than the devil. You can admire these people all you want. You can envy them if you'd rather. But don't make the mistake of trying to train like them. You'll wipe out for sure.

Easy gainers can break all the training rules and still make big gains. They can wave light dumbbells around and grow arms like John Grimek. They can live on tutti-frutti ice cream and still win the best gut award at the muscle show. People like this have to be endured if only because it's against the law to poison them.

One of the best physiques I know trains for half an hour at a time and never took a supplement in his life. He's too lazy to squat and gains fine without them. But the point you've got to remember is that this type of guy is unusual. You can't use him for statistics. He's got the particular chemical balance or metabolism or whatever that enables him to grow bulging muscles with practically no effort and even less thought.

Very, very few men can train that way and still make gains. If you can - if you're an easy gainer - then you're wasting your time reading this. You don't need help. If you're not an easy gainer - if you're a hard luck apple like the rest of us - then don't get confused and don't be misled. You can't train like the easy gainer and still succeed. He's got natural advantages you don't have.

If you're an easy gainer - a natural, in other words - you'll soon know it. You'll grow like a baby whale no matter what you do. But if you're not an easy gainer, and chances are you're not, then figure on working very, very hard. It's the only way.

Answer: Yes. It'll stop you from gaining fat and that's a heck of a good thing. If you don't get any more out of this series than that, your money's been well spent. Gaining weight is a concept widely misunderstood by a lot of trainees. Some are just young and impressionable, of course, but some are old enough to know better and so perhaps we'd better take a closer look at the whole gig.

First of all, there's nothing wrong with carrying a little fat. It's probably better for your health and it's certainly better for your nerves. Fining right down for maximum cuts is a nerve wracking proposition at the best of times. Trying to maintain anatomy chart definition fifty-two weeks a year is a guaranteed route to the laughing academy. If you smooth up a little between peaks, don't worry about it. What little you lose in appearance you'll more than make up in well being.

Excessive fat is a different thing, however, and that's where the trouble comes in. Some trainees are so obsessed with looking big they don't care if it's muscle or just pure lard. These are the guys we're concerned with.

My friend Ollie trains a bit. He went on a bulk kick one time and beefed up about 30 pounds. I was in his back yard talking to his wife one day. Ollie came out in psychedelic Bermuda shorts and a T-shirt.

"Here it comes," his wife muttered. "The jolly green giant."

Ollie waddled over and flopped into a lawn chair. "Gaze on it," he said. "The Grecian ideal."

I leaned over and prodded him in the stomach. "Ollie," I said, "is that all you or are you smuggling furniture across the border?"

He heaved himself out of the chair and walked up to the edge of the lawn. "Do I look herculean?" he said over his shoulder. He bent down to pick a stick off the grass.

"Ollie," I said. "From here you look like sunset over Semiahmoo Bay."

He straightened up and looked indignant. "I thought you liked bulk."

"Get rid of it," I said. "As fast as you can. And next time you gain weight make sure a little of it is muscle."

There's no value in fat. If you think it makes you look better, you're only kidding yourself. It's a blanket of blubber that impedes your comfort and efficiency, shortens your life, boosts you over the melting point on hot days, and hides the muscles you're working so hard to develop. Getting fat just to look bigger makes about as much sense as wearing extra sweaters so people will think you've got a big chest.

Fat does absolutely nothing for your lifting ability. There isn't an ounce of strength in a hundred tons of fat. All the grease in the world won't pull a sick hen off a nest. Don't accumulate any more of it htan you have to.

A moderate amount of running during your building up process will stop you from adding soft flab to your body. Your actual body weight increases might be a little slower for that reason, but you'll be that much better because of it. Too much running, of course, could hinder your muscle gains. The trick is to fun just the right amount, which brings us to the next question.

Question: How much running should I do?

Answer: That depends on your age and what you're trying to accomplish. Let's set up some broad categories and take a look at them.

Anyone under 30 years of age can, for all practical purposes, be considered young. Generally speaking, these people are primarily concerned with building up a prize winning body just as rapidly as possible. Running, for them, is a very secondary consideration and so we'll view it in its effect on the appearance.

People in the 30 or under category should run a minimum of one mile two or three times per week. The running should be nice and easy and very slow. About 10 minutes to the mile if pretty good. If you gain weight easily, you can step it up to about two miles for even better results.

This amount of running won't hinder your muscle gains. It should, in fact, help them. It will also keep your fat accumulation to the minimum, and your waist and hips nice and trim. It'll also do some very startling things for your health, and we're going to talk about that in detail some other time.

And this one as well:
http://ditillo2.blogspot.com/2014/07/big-man-running-roy-m-wallack.html

Men from age 30 to about 50 are still young in the general sense, but then come into another category because their interests usually change. Generally, they're more concerned with a high degree of fitness along with their development and not too concerned with bulking up any further. They may even be interested in supplementing their training with some other sport. These people should step up their running to about five miles three or four times per week. They should also aim for an average speed of about eight minutes per mile.

This is a lot of running and, when coupled with weight training and a high protein diet, will do amazing things for your appearance, ability, and health.

Your whole body will become trim and shapely and very, very hard. Your definition will improve one thousand percent. Even your skin tone will change enormously.

More drastic, and probably more important, will be the health improvement. This amount of running will produce the phenomenon known as capillarization.

Capillarization, if you don't already know, is an extremely complex physiological process. We'll investigate it in detail some other time. Briefly, it means the formation of an enormous amount of new capillaries within the body. This increase in the capillaries improves the oxygen-nutrient delivery and waste removal functions of the blood stream to an incredible degree. No other bodily change will give you the "feelable" results that capillarization will. There's no use trying to describe it to you. You'll have to experience it for yourself to fully appreciate it.

For men over 50, running should be of paramount importance. Reduce your weight training a bit and run five miles a day and about six days a week. Nothing, but nothing, you'll ever do will do as much to preserve and amplify your youth and vigor.

Question: What is the "Get Big Drink" and do I need it?

Answer: The "Get Big Drink" is a homemade concoction that's guaranteed to put biceps on a bamboo rake. The recipe is as follows:


Pour two quarts of whole milk into a bowl and add at least a day's supply of Hoffman's Gain Weight. Add more than a day's supply if you want to gain weight faster.
Now add two cups of skim milk powder and blend it.
Next add two eggs, four tablespoons of peanut butter, half a brick of chocolate ice cream, one small banana, four tablespoons of malted milk powder, and six tablespoons of corn syrup.
Blend the ingredients together. Pour the mixture into a plastic jug and keep it in the fridge.
That much of the Get Big Drink contains approximately 200 grams of the best protein you can get and about 3,000 calories. There's be about 10 glassfuls in the jug and you drink it all in one day. Don't try to drink it in one sitting and don't drink it in place of your regular meals. Spread it out over the day. You should take a glassful every hour or so.
The drink is intended to be an integral part of a crash weight gaining program. You take it in addition to your regular meals, not in place of them. If you train properly - along with the principles outlined in these articles - and take the drink in the suggested amounts, you can expect to gain up to five pounds a week.
Keep a close watch on your waistline. As I said earlier, there's no point in getting fat. If you start getting too soft, or when you gain all the weight you want for now, eliminate the peanut butter, ice cream, banana, malted milk powder, and corn syrup, and substitute protein powder in place of weight gain powder.
Unless you put weight on easily, and very few people do, you need the "Get Big Drink" or something very much like it. It's virtually impossible to build the type of body you're after on just regular meals alone. You need extra nutrition, and the "Get Big Drink" supplies it in boxcar lots.
Inadequate nutrition is undoubtedly one of the major causes of bodybuilding failure. If you can't gain muscle bulk as quickly as you'd like, then the "Get Big Drink" is the answer to your problem.