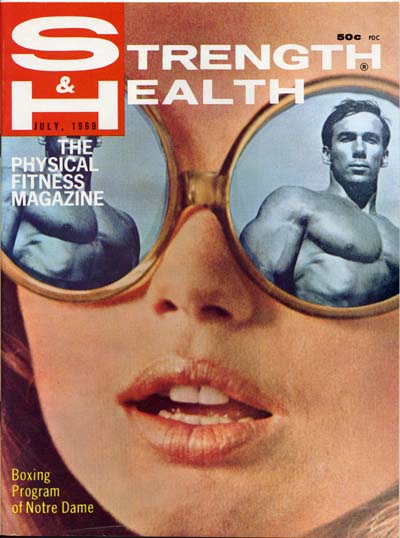 Originally Published in This Issue (July 1969)

This year's edition came out on Tuesday.

Molton Street runs parallel to, and four blocks west, of the main drag. Municipal zoning charts refer to it as a secondary rental area, which means that parades go by another route, fire insurance premiums are fifty percent higher than they should be, and the truck that washes down the street is always out of water when it gets there.

Years ago, there was a great furor at City Hall and a tremendous wave of interest in renovating the area. The instigator of all the enthusiasm was a newly elected city council member - an ambitious spinster of incredible chest size, the general proportions of a defensive linebacker, and the sensitive grace of a hammerhead shark. She announced her intention of conducting a personal tour of the area, and was chauffeured to the scene with great fuss and fanfare. She alighted from her car and gazed grandly about her. One of the two reporters covering the event whispered that she looked as though she fell down and she'd never get up again. The other reporter agreed, and added that with all the protoplasm lumped in front as it was, it was inevitable there'd be none left over for brains.

She started down the street. She went exactly three-quarters of one block, during which distance she received thirteen wolf whistles, four suggestions for the evening, and a seven stitch bite on the hip from the doberman that was supposed to be guarding the warehouse of the Western Fish Company.

She was whisked away in an avalanche of colorful and previously unsuspected vocabulary, and renovations were never mentioned again. The street settled back and private enterprise resumed its normal state of activity.

The man who ran the sporting goods store died and was replaced by a Chinese widow who sold vegetables in front of the store during the day, and an even more popular commodity in the back of the store at night. The building supply company on the corner was observed unloading merchandise of an extremely high thermal content from an unmarked van at four o'clock in the morning and were shortly replaced by an outfit that imported Japanese guitars. The people who ran the cut rate clothing store in the next block guessed wrong on contemporary styling and stocked up with junk they couldn't give away. Three months later, the building was wiped out by a fire which spread with such incredible precision that the Fire Chief observed the cause was unquestionably a fluorescent light on the main floor, a tri-light on the top floor, or an Israelite in the basement.

Insurance investigators poked about in the rubble for a few days, but the property was eventually cleaned up and converted into a parking lot.

One sunny afternoon, a young man emerged from his car in the parking lot. He had on tennis shoes, blue jeans, and a T-shirt four sizes too small with the words YORK BARBELL CLUB prominently displayed on the front.

The young man stepped out onto the street and took a deep breath. The seams strained in his shirt and a young lady passing by got a glassy look on her face and walked into a parking meter.

The young man walked three blocks down the street. Four teenaged girls whispered and poked each other when he passed. Three pedestrians and a taxi driver made mental notes to join a health spa, and a middle aged lady snarled at her husband who was short and fat and smoking a large cigar.

The young man stopped at a small building with pictures of numerous bulky gentlemen in the window and lettering on the glass which announced the premises as a gymnasium specializing in fast weight gains and losses for people in need of either.

The young man entered the gym and walked into the owner's office. He sat down and cleared his throat.

The owner was dozing in his chair. He opened his eyes slowly and looked at the young man for a long time. "You know, Hanley," he said finally, "you really oughta buy a bigger T-shirt."

The young man took a deep breath and bounced his pecs. "Don't you think I look good in it?" he said.

"You look like you're strangling in it," the gym owner said. "It's at least four sizes too small."

"It's really your fault," the young man said. "You oughta buy me a new one."

The gym owner blinked. "Really?" he said. "How do you figure that?"

"It's this chest program," the young man said. "I'm growing outta my clothes."

"Tough," the gym owner said. "That's the name of the game." He sat up in his chair. "How much has your chest grown, anyway?"

"Almost five inches," said the young man. "I wouldn't have believed it."

"Anyway," the young man added, "I'm ready for the next step."

"You're sure you wanta keep on?" the gym owner asked him. "Your chest is really big enough now."

"To start with," he said, "you'll work out six days a week for this final month. Three days will be a general program and the other three will be chest specialization.

"We'll take the general program first," he said. "Start with regular presses. 5 sets of 5. Do them in good style and not too much back bend. You should be able to work up to heavy weights pretty quick.

"Next," he said, "do lateral raises for the deltoids. Do them rhythmically and in strict style for 3 sets of 12.

"Now," he said, "we go to the back. You start with 5 sets of 8 on the rowing exercise as heavy as you can. Use a close grip and pull the bar to your lower abdomen.

"Next you do regular chins with a close grip for 5 sets of 8. You've gotta work up to where you can tie on extra weights as soon as possible.

"After the chins, do pulldowns to the back of your neck with the lat machine. Strict style for 3 sets of 15 reps.

"The final back exercise," he said, "is prone hyperextensions. Do them off a high bench for 3 sets of 12 reps.

"Now you go to your arms," he said. "Alternate (superset) incline bench dumbbell curls with lying extensions on a flat bench for 5 sets of 8 reps each. Then superset concentration curls with triceps pressdowns for 5 x 10 each.

"Now," he said. "something a little different. The next exercise is called Hise shrugs, and you've probably never done them before. They go like this: Load a bar on the squat rack and take it on your shoulders exactly as if you were going to do squats. Use a weight a little above your best squat. Lean forward very slightly, take a deep breath, and shrug your shoulders. If you're doing it properly, the bar will rise an inch or so. Do 3 sets of 20 and alternate with a set of light pullovers after each set of shrugs.

"This exercise will improve your posture, bulk your trapezius, and expand your rib box terrifically. Give it a good try.

Now," he said. "That completed the general program. On three alternate days a week do the chest specialization. Like this:

"Start out with bodyweight breathing squats. Bodyweight on the bar and three huge breaths between each rep. Do 3 sets. One set of 25, one set of 20, one set of 15. Do 20 light pullovers after each set of squats, and take a five minute rest between sets.

"Now," he said, "bench presses with a fairly large grip and all the weight you can lift for 5 sets of 8.

"After the bench presses, do the flying exercise on a flat bench for 5 x 12.

"Next, incline dumbbell presses for 5 sets of 6. Keep the weights well out to the sides and the elbows back.

"And finally," he said, "another exercise that's a little different. You need two flying rings for this one. Suspend them from the ceiling with good strong rope. They should be about two feet apart and three feet off the floor.

"Hold one in each hand, and put your feet on a bench so your facing the floor. You should be in the same position you'd be in if you were going to do pushups.

"Now," he said, "let the rings go out to the sides and your body drop between them. Go as low as you can, and then pull the rings back together again so that your body levers up to its original position. It's something like an upside down flying exercise, only more so.

"Bend your arms slightly at the start, and try to keep them bent to the same degree during the whole exercise. Build up to 5 sets of 10 and you'll know what pec work really is.

"And that completes the program," he said. "Can you handle it okay?"

The young man looked at his notes. "I'll try."

"Good. And don't forget to eat well and do the supplementary exercise I gave you last month. You oughta really get big and bulgy these next few weeks."

The young man got up to go. "That's good," he said. "And you really think I should get a bigger T-shirt, eh?"

The gym owner ushered him to the door and patted him on the back. "My boy, if you don't you are going to develop some problems with circulation."