Specialization of the Calves - John McCallum (1967) 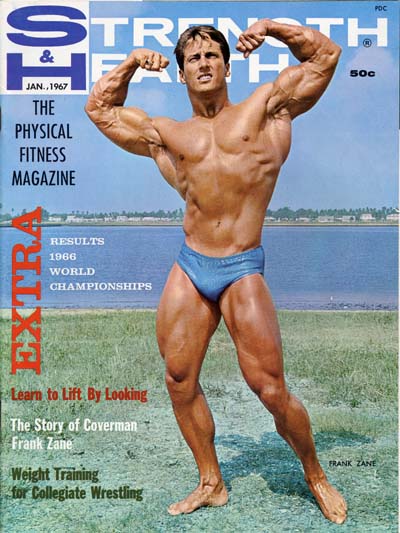 Originally Published In This Issue
(January 1967)

Nobody'll give you much of an argument if you say that calves are tough to develop. You could start up a small country with the men who've given up on calf work. However, despite what you may have heard to the contrary, your calves can be developed the same as any other muscle group provided you tackle it properly. You can build them up big and bulky if you specialize on them. And you can even do it quickly if you want it bad enough.

You don't see too many good calves around. A lot of bodybuilders have outstanding development of the other muscles, but not too many own calves in proportion. Part of the trouble is that calves are a small muscle group and not visible when you're dressed, so very few men spend much time on them. You may think you do, but stack your calf work against the total time you spend on your arms or your chest and you'll see you don't really have much to beef about.

A few men do apply hard and intelligent effort to their calves. These are the men with legs like Hercules.

One of the most outstanding sets of calves in the world belongs to a very nice fellow named Maurice Jones. Unfortunately, not many people have seen them.

Maury, as his friends call him, is a rare individual. He's one of the very few people actually as modest as most people claim to be. Very, very few people have been lucky enough to see Maury stripped down. This is something of a shame because he owns one of the strongest and most massive physiques of all time.

I went hiking with Maury and another guy a few years ago. Maury is in better shape than most race horses. He breezed up the mountain trail like he was on a high speed escalator. The other guy and I were human. We staggered to the top and collapsed, Maury wasn't even breathing hard.

It's wonderful country up in the hills. The air is sharp and clean and even the flowers smell better. We wandered around till we got hungry and then sat down and unwrapped the lunch.

We got talking about muscles while we were eating. The other guy'd been trying to build up his calves but he wasn't having much success. He needed a little inspiration, so we worked on Maury and finally he agreed to show us his calves.

He tugged up his pant legs with a lot of difficulty and flexed his calves. They looked as big as watermelons and defined beyond belief. He had on a pair of hiking boots. They're the size of loggers' corks, but they looked like ballet slippers under those colossal calves.

I went over to Maury's place a few days later and watched him exercising his calves. He didn't do anything else that workout. He wasn't too concerned with how much weight he used, but he worked smoothly, rhythmically, and very forcefully through a series of advanced calf exercises.

After he finished, we sat around and talked for a while. I'd been specializing on my neck, but I thought I might throw in a little calf work.

"You won't do justice to it that way," he said. "Why don't you specialize on your calves for a while?"

I told him I was concentrating on my neck and I didn't want to quit yet.

"Your neck's big enough already," he said. "Let it go for a while and specialize on your calves instead. They'll add a lot more to your appearance."

"How long would I have to work at it?" I asked him.

I thought about it for a moment. "I've tried calf work before. I never got much results."

"That's probably true." I thought about it a moment longer. "Tell me," I said. "What phase of training do you think is the best time for calf specialization?"

"During a bulking up period."

"You mean when you're gaining weight?"

"That's right," he said. "There's not much point in trying to build your calves unless you're gaining weight."

He had me convinced so I went on a calf specialization program. I did the same exercises and reps he'd been using. In two months my calves went from 16-5/8 to 17-1/2 with a big increase in shape and definition.

We've been basing our specialization programs on the fact that you get faster and better results if you tie in the specialized work with bulk and power work on the rest of your body. In other words, the smaller muscle groups will grow a heck of a lot easier if the big muscle groups are growing in size and strength at the same time.

This is more true of your calves than any other section of your body. Unless you inherited legs the size of rum barrels, you'll find it's practically impossible to build really big calves without bulking your thighs and back to herculean proportions. Conversely, if you bulk your thighs and back with hard work on the growing exercises, your calves will come along with no trouble at all.

I used to work out with a guy who had as nice a set of calves as you'd want to see. They taped around 17-1/2" and were shaped something like Grimek's. The funny thing was I never saw him doing anything for them. He was strictly a power man. He wasn't so hot on the quick lifts because he didn't practice them enough, but he had a tremendous amount of sheer, overall power.

He trained regularly and very hard on squats and deadlifts and a few of the standard bulk exercises. He did them all with heavy weights and moderately low reps.

He was fond of milk and used to soak it up like a roomful of cats. Nobody realized it at the time, but he'd stumbled on to a crude system of muscle growth - hard work on the heavy exercises and copious quantities of protein.

The calves were puzzling, though, and I asked him about it one day.

He looked down at his calves like he'd never seen them before and said, "What about them?"

He gave me a big grin. "Johnny," he said. "I'm terrific all over. You oughta know that."

He held one leg out in front of him and pointed his toe like a ballet dancer. He twisted his leg from side to side while he looked at it. "Terrific," he murmured. He walked over to a mirror and flexed his calves. "You're right," he said. "Amazing what nature can do when she really strains."

"Willie," I said. "Will you quit playing the fool. All I wanta know is, did you have big calves when you started training?"

"But what about your calves?" I asked him. "Were they big?"

He looked at me like I'd just got over the wall. "Exercise, of course. How else?"

"Willie," I said. "I've watched you lifting weights for two years no. You've never done a thing for your calves and you know it."

"At home?" I looked at him carefully. "Are you kidding me?"

"No, no," he said. "I exercise them at home pretty near every day."

"No. I don't care how big they are. I just do it to make them springy."

I cocked an eyebrow at him.

"Willie, I said. "Do you mean to stand there and tell me you built those calves at home without even caring what they looked like?"

I put my hand on his shoulder. "Willie, by boy. Sit down and tell your old buddy all about it. Every last detail."

"You wanta make your calves springy?" he asked.

"Springy, schmingy," I said. "I don't care if they're as useless as your head. I just want them to look like yours." I looked at his calves again. "You know, they're really good."

He gave me a nudge. "Not good, Johnny. Terrific."

Big calves make a fantastic difference in the overall appearance of your physique. They supply the absolute finishing touch to a truly outstanding body. It's noticeable that all the really top men, like Grimek, Park, and Pearl, have proportionate calf development. Their calves are one of the items that lift them out of the rank and file and into the all-time great category.

When he does this under the lights it's the most unbelievable sight you could possibly imagine. He displays what must be close to the absolute maximum in herculean calf development.