Stanley Lampert was a collegiate track and field champion who won many prestigious competitions during the late 1940s, and continued to compete internationally through the mid 50s. He set a world record in the shotput in 1954, and placed second in five subsequent meets when the record was broken.

Along with Los Angeles Times publisher Otis Chandler, Stan Lampert was on of the first American shot-putters to appreciate the value of heavy weight training to enhance field event performance. The former All-American has won over 400 medals in over 250 track meets, and he raced shotput great Parry O'Brien to the 60 foot barrier, soaring past the listed IAAF World Record in the process on May 1st, 1954.

After his athletic successes he proceeded on to similar acclaim in the business world as an insurance salesman. At the age of 53, a height of 6 ft. 4 in., and 252 bodyweight he has returned to weight training and is now handling far more weight than he did when he broke the World Record in the shot, over 25 years ago.

His best lifts include:

. . . nearly a 40 percent improvement over his earlier efforts.

In the following article he discredits some popular training mythology and offers his own training program for consideration. 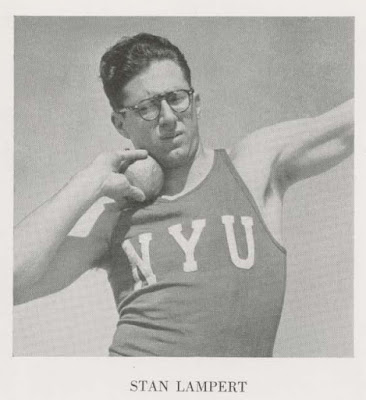 After thirty seven years of participating, observing and researching strength and power building, I've come to some conclusions that don't jibe with accepted modern theory. In fact, my conclusions are directly contrary to the popularly accepted beliefs. Here is the dogma, followed by my determinations.

1) You must do as much as you can stand to benefit from strength training.
- False. You should do as little as necessary to keep improving. My observation is that 99% of all strength athletes overtrain.

2) No pain - no gain.
- False. Simply put, if it hurts you did too much. If it hurts a lot, you did much too much. If you work out today and you train properly it shouldn't hurt you today, tomorrow or the next day.

3) You shouldn't work the same muscle groups two days in a row.
- False. It is impossible to build strength rapidly on less than five workouts every six or seven days. After 48 hours of rest, a muscle starts to lose tone and strength.

5) Sets are required to build great strength.
- False. Even more false, unless you are referring to singles done with resistance that barely allows you to finish the movement (or lack of movement as we will see).

6) Workouts should take at least one hour.
- False. For maximum strength development workouts need not be nor should be longer than 30 minutes and certain workouts should not take even 10 minutes.

8) You should constantly change workouts.
- False. You should never change a workout while you are making progress, no matter how slight. Only change when you are stuck at a plateau.

9) You should take regular long layoffs.
- False. Every time you take a long layoff you may lose up to 20% of your weight lifting capacity and it will take weeks if not more to get back to where you were. For this reason cycle training wastes a lot of time and energy.

10) You will burn out on such constant long term training.
- False. You won't even get overly tired, since two of your five workouts will take 10 minutes, two will take 20 minutes, and the longest one will last only 30 minutes.

Now that I've given my contrary opinion on the above ten misconceptions (there are many others), let's get to my 90 minutes a week strength building routine. This concept has never failed anyone who has used it and usually shows measurable results in one to two weeks. Nobody has taken longer than two weeks to show marked (if not dramatic) improvement. Let me, however, caution you -- this routine will not do several things:

THIS IS NOT FOR BODYBUILDERS.

The routine is simplicity itself.
The only equipment it requires is a power rack, a barbell and lots of big plates.

On a six or seven day cycle you will work out in this manner:

Limited movement power rack training, done as follows:
Choose seven or eight basic exercises and do one rep in two positions. The movement should be confined to four to six inches only. Set the lower pins where you wish to start. Set the upper pins two or three holes above. Choose a weight that you can lift with great effort but still manage to hold against the upper pins with some pressure for four to six seconds. A sample set of movements might be (starting at the top of the rack): overhead press, rise on toes, squat, upright row, bent row, bench press, deadlift. This routine should take no longer than 15 to 20 minutes. It is extremely strenuous.

Do isometrics . . . no movement at all. Set upper pins the level you wish to push against and once again do seven or eight exercises, one rep in two positions. Hold for six seconds in an all out effort to move the immovable bar. Place the pins in a weak of sticking point position for one or the reps in each movement.

Same as Day One, except make sure the position of the pins is different, so as to work the whole range of motion over a few workouts.

Same as Day Two, except change positions as explained above. Warning: all out isometrics are also very strenuous; possibly the most strenuous effort you can make. These power rack and isometric exercises must be proceeded by a warm up and stretching routine . . . a few power cleans, presses and squats with a light barbell will then be sufficient.

Rest. You won't feel it and won't ache (you may the first week), but you will be tired . . . do as little as possible.

Gradually work up to a trial with as heavy a single as you can manage. The heavy single attempt should be made for one exercise of each large muscle group. Try to increase this this each week if only by a pound or two.

Some of the more rugged guys can go back to Day One immediately after Day Six without the day of rest.

I personally, commencing at the age of 50 and already quite strong, was able to increase my lifts 25-30% using this routine. I got my overhead press to 275 and my squat to 525. For someone now approaching 54 and 6'4" with long arms and legs, that ain't bad!

Give it six weeks and see if you can't improve more and faster than I did. You should. You're younger. My 18-year old son is a miniature superman and follows this routine exclusively. No need to go into detail but at 5'8" and 180 lbs he is no doubt the smallest State champion in the shot put in the USA and he threw 59' 2.5". He did no other resistance training than this.

Perhaps in a later article I can go into further detail, but you have enough here to dramatically improve your strength and power rapidly.