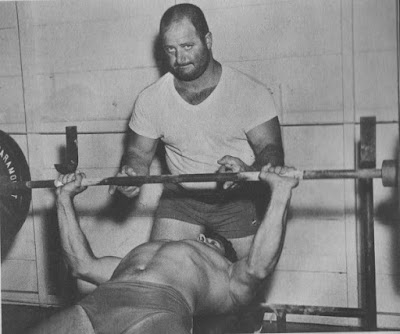 This is a bench routine given to the author by Bill "Peanuts" West in October of 1966.

As long as I can remember I have enjoyed doing the bench press, regardless if my maximum was 135 pounds (which it was at one time) or 400 pounds. All psychologists will tell you that your performance on a task is proportional to your enjoyment of doing that task. This factor will be very important after you have been training a good many years.

A common mistake, which we all make, is to try and copy a training routine which someone else has used successfully. The problem is that as you look at what that person is doing today, you tend to forget that the source of the success was established quite a few routines before.

The best routine I have ever found was given to me by Bill West in October, 1966. The rep routine was:

This routine would be followed twice a week, with a light bench press routine thrown in, in the middle of the week. The key to this routine rests in finding a poundage that you can do for singles. I would suggest that you start with a poundage at which you can ordinarily do 5 reps. From here, you should add 5 pounds every workout, until you hit a point where you can't advance and still do the five singles with a constant poundage. At this point you should switch to workouts alternated between light and maximum in which you try continuously increasing single attempts. The reps would be as follows, with the single being the maximum:

This routine should allow you 6 to 8 workouts in which you would attempt limit poundages. A short layoff, two workouts should follow. Bu following this workout and switching the bench press to the first exercise in your workouts, a 2- to 25 pound improvement would be reasonable.

I strongly feel that when you are training for a heavy bench press, you should not do any other exercises which put pressure on the shoulders, specifically dips, and presses behind the neck. Personally I favor a 28 inch grip, as it seems the grip which hurts the shoulders the least and still gives lockout power. Note:
I believe Mr. Hanee reincarnated under the name Paul Carter at a later date. Speaking of which, if you're a  raw bencher looking for some very sound advice on getting bigger numbers, check this three part series out. I still can't believe how much it's helped me, and continues to help me, especially with my setup. Really, after hours of video tutorials and piles of pages on setting up and implementing the upper back in your bench, this did the trick and still does, for me anyhow. Here, go nuts:

Continuing with the article:

Generally, most people don't set themselves solidly enough on the bench. With a solid but sane back arch, proper foot stance and correct use of the upper back musculature, you should be able to bench 20 pounds more than you would with a weak position.

The finest bench press I've ever witnessed was a 550 by Mel Hennessey, at under 250 pounds bodyweight. This lift impressed me so much because it was done in a rigid manner, the position at the chest being so strong that it appeared he could have maintained that position for 10 seconds or more.

Pardon me?
Did someone out there just say pause bench presses?
My hearing ain't really what it used to be.