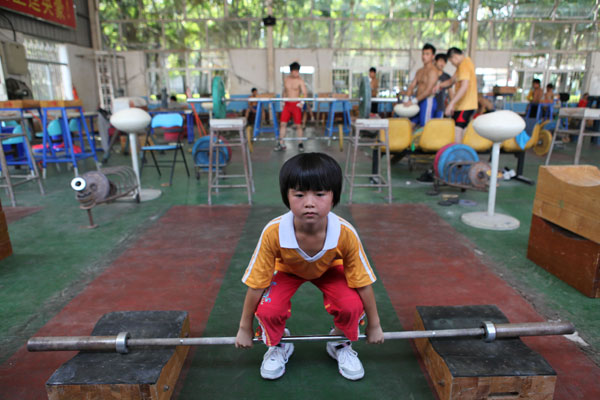 THE CLEAN AND JERK

In this two part motion, the barbell is brought explosively to the chest (The Clean) and then is driven overhead (The Jerk). Weight trainers use the Power Clean, which involves the identical parts of the Clean portion of the lift except the low squat position. This lift is divided into 9 parts (6 in the Clean, 3 in the Jerk).

Part One - The Starting Position

As in the Snatch, this part begins when the athlete approaches the bar and ends at the Moment of Separation of the bar from the platform (MOS).

The feet are placed relative to the bar in the same position as in the Snatch, that is, with the bar over the metatarsal-phalangeal joints (MPJ) or very close to it. In terms of width of foot placement and the turning out of the toes, it's also the same as in the Snatch. One Soviet researcher does state that the feet could placed closer together in the Clean (15 cm., 6 in. apart at the heels), since the starting position in the Clean is not as cramped as in the Snatch.

This is the major difference between the two lifts. The grip in the Clean is much narrower than that in the Snatch. A shoulder width grip is considered best. Arm length can effect the placement of the bar on the chest, so it must be considered when selecting a grip width for the pull. Again, the hook grip is ised.


The Position of the Links of the Body -

Since the grip has been changed there are slight changes in the positions of the body links. Most importantly, the angles in the knees and hips are greater because the shoulders are in a higher position. The shoulders, by the way, do not change their position relative to being over the bar.

The rest of the items mentioned for the Snatch are applicable for the Clean including the effect of body type.

Part II - The Preliminary Movement of the Barbell

Again, this part starts at the MOS and ends when the knees finish straightening for the first time.

The angle at the knees and hips will be greater than in the Snatch both at the start and end of this part due to the higher position used at the start. All other items to consider are identical to the Snatch.

This part, as in the Snatch, lasts from the moment the knees stop straightening the first time to the moment they stop bending in the scooping position.


The Shift of the Links of the Body -

Again, except for the greater angles in the knees and at the hips, this part is similar to the Snatch.

This part lasts from the moment the knees stop bending in the scoop to the final extension of the body.
The Shift of the Links of the Body -
Same as in the Snatch, except for the fact that the body starts much straighter in the Clean due to the larger angles at the knee and hip.
Part V - The Unsupported Squat

The unsupported squat lasts from the moment the body finishes straightening to the time the bar reaches maximum height.


The Shift of the Links of the Body -

Just like in the Snatch, the links of the body stop straightening and are moved downward toward the squatting position.

Here again, the arms are the key to a successful finish to the pull. The lifter should pull strongly with the arms, while moving the body down. One difference in the Clean is that the distance he has to move the bar is much shorter.

This final phase of the Clean starts the moment the bar reaches maximum height in the pull and ends when it is fixed on the chest.

Again, many of the same points discussed in the Snatch apply here. The body continues into the deep squat as the knees and ankles bend. The trunk is held very rigid and as upright as possible. This is probably more important in the Clean than in the Snatch, since the lifter will be receiving the bar on his chest. If the torso isn't tight the upright position of the body could break down. The arms are rotated under the bar so that the elbows are pushed well forward and up. At the moment the athlete meets the barbell it should be caught on the upper chest and deltoids. He then rides the bar into the low squat. If he catches the squat right, he can bounce up. If not, he must make a deliberate effort to rise by maintaining the rigid torso, raising the hips, and straightening the legs.

Part VII - The Start for the Jerk

The athlete places the feet in a position similar to the one he uses for the Clean.

Position of the Links of the Body -

The legs are straight. The pelvis is tilted slightly so that the curve of the rear of the buttocks is positioned 4 - 5 cm. (1.5 - 2 in.) behind the heels. This positioning is required to ensure a proper dip. The trunk, as usual, is tightened and straight up and down. The head is tilted back slightly making the line-of-sight somewhat above the horizon.

The Position of the Arms -

The bar is supported by the chest and the deltoids. The arms are relaxed and the elbows are raised. The lifter should not have to apply any pressure with the arms to keep the bar in place if he has positioned it correctly.

Preliminary Movements Prior to the Dip

Lifters often reset the bar at the shoulders upon completing the recovery from the squat. This is done to put the bar in a more comfortable position or to put it in a more advantageous position for the Jerk.

Another method of getting set for the dip is called the "pendulum method." It's done to ensure that the body is in perfect position. The lifter takes up the described starting position. He then allows himself to sway forward up to the limit of forward balance. Then he reverses direction and sways rearward, and at the moment he feels he will fall over backwards he goes for the dip.

The Type 1 lifter with his long arms may have difficulty holding the bar with his elbows pointing directly to the front. Therefore, he may have to point his elbows slightly to the sides or use a wider grip to get the bar to sit properly on the chest.

Part VIII - The Dip and Drive

This part begins the moment the knees begin to bend and ends with the full extension of the body.

The lifter begins the dip by bending the knees and ankles and moving the hips and shins downwards and to the sides. If the dip is done properly, the bar will travel a perfectly straight line downward, and the hips will move back slightly. The trunk, as always, remains rigid and moves straight down with the elbows remaining in their original position. When the athlete reaches the bottom of the dip, he quickly reverses direction. He drives off the full foot by extending the legs. His extension is completed by rising on the toes.

The Delay Between the Dip and Drive -

The action of the hips and knees in this part of the lift is very similar to the action in Parts III and IV of the pull. When the lifter dips, he is basically adding energy to the muscles of the legs, which can be used to straighten them with more power. Just like in the pull, if he delays after the knees finish bending, before starting upward, much of this energy will be lost and the legs will not straighten with extra force.

Using the Spring in the Bar -

Some lifters feel that they must wait at the bottom of the dip to let the bar bend to its maximum point prior to the drive. Soviet studies have shown that this is not necessary. They claim that the bar reaches its maximum bend while the athlete is stopping his descent in the dip. They recommend minimum delay at the bottom.

This part lasts from the moment the body reaches full extension to the fixation of the bar on arms' length.

When the barbell has just left the chest, the split begins. The legs are split front and back as fast as possible. The front foot travels slightly more than one foot's length forward, while the back foot moves to the rear approximately two foot lengths. The shin of the front leg should be almost in a vertical position. The rear leg is bent slightly at the knee. The rear foot is pointed straight forward with the lifter's weight supported on the toes only. The arms straighten actively as the body is lowered. The lock into place and are positioned just behind the ears,so that the bar is in line with the elbows, shoulders, and hips. The lifter recovers by first straightening the front leg and moving it to the rear prior to bringing the rear foot forward.

The upward drive of the barbell is not the only force that moves it to arms' length. The lifter can help by actively pushing himself into the split. He does this by minimizing the amount of time his feet are off the ground in splitting. Once the feet are back on the ground he can push himself under the bar. This pushing adds the necessary upward force to finish the lift. If he delays getting his feet down, the upward momentum of the bar may slow down to the point where he has to "press out" the bar very noticeably. In foot placement, the rear foot should touch first, but the energetic placement of the front foot is the key.

Next: Evaluation and Preparation of the Lifter's Body.