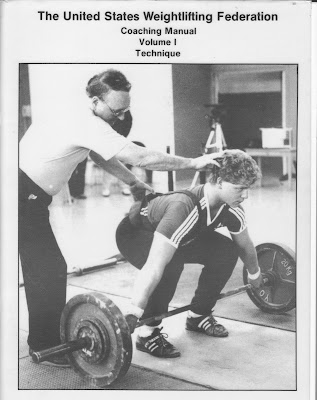 This manual is the first step in an intensive coaches' education program promoted by the U.S. Weightlifting Federation. The U.S.W.F.'s goal is clear. Bring the caliber of American weightlifting up to world best level. As a secondary effort, we want to provide useful information to coaches in other sports who are interested in using the Olympic lifts to better prepare their athletes. To accomplish both goals, we have decided to start with a detailed discussion of the technique of the exercises. It's critical that our lifters have the best technique possible and the non-weightlifters do the exercises correctly to get maximum benefit.

In the past, many people have stated that the Olympic lifts are too technical and too difficult to teach. Here in this manual we'll show you a step-by-step approach that will make teaching the lifts to your athletes much easier. Also, you'll learn how to evaluate the lifts. In other words, we're going to give you a group of teaching activities and a means to evaluate how well your athletes are learning.

This manual is divided into four sections. Section I gives you some basic coaching knowledge and a glossary of terms we'll use to describe the lifts. Section II gives you a technical description of the lifts. If you have trouble understanding the material in this section, skim over it, or jump right to Section III. Section III tells you how to teach the lifts and much of the Section II material is presented at the simpler athlete oriented level. Once you have read Section III, it will make the more technical discussion in Section II much clearer. In Section IV you'll be given a list of common errors and the words and actions the coach can use to correct them. Also, for use with our U.S.W.F. Junior Program, we've outlined the technique contest procedures.

This manual will be followed by --
Volume II: General Physical Training for the Weightlifter.
Volume III: Training Program Design.

The weightlifting coach should have a good background in various areas to properly understand the Olympic lifts. In this section we'll cover some basic information that will help the coach get through Section II more easily. The subjects we'll cover here are Anatomy and Biomechanics. We'll also give you some terminology that will be used in the technical description of the lifts.

The coach should have a working knowledge of the muscular and skeletal systems of the athlete. We'll try to stay away from technical terms, but it won't hurt if you become familiar with the names of the various bones and muscles involved in lifting the barbell.

The bones are the links of the body through which muscular force is transmitted. Without a rigid bone structure we could not move the barbell. Our technique discussion will focus on the links of the feet, shins, thighs, torso, arms and the head. The important joints we'll consider are the ankles, knees, hips, shoulders, and elbows. There are two areas of special interest and study. They are the torso and the feet.

In the foot a key anatomical reference point that will be mentioned often is the matatarsal-phalangeal joints (MP J). In simple terms, it's the joint that connects the toes to the foot.

Our study of the muscles will be directed toward how they move the bones (links) of the body. To make things simpler, we'll only discuss the major movers of the body during the lifts. Therje are two terms that refer to movement that the coach should know:

Extension -- the action that moves two adjacent links away from one another, straightening the joint.

Flexion -- the action the moves two adjoining links toward one another, bending the joint.

The list below gives the function of the main muscles used in lifting:

The coach will encounter three basic types of bodies. There are some slight differences in technique for each type. The coach should be aware of these differences and make sure each athlete is using the technique best suited for his body structure. This is especially important when working with juniors, since they may grow from one type to another and require changes to their technique. Basic lifting descriptions in this manual will be directed toward the proportional athlete, with additional information provided for use with athletes having a non-proportional body.

Biomechanics is the application of engineering principles (Mechanics) to the human body. In weightlifting, it has been used extensively to study technique. Usually this is done by taking high speed film and looking at each frame to see how the lifter moves. Computers help to make the date taken more understandable. Before the biomechanist can do evaluation, he must first understand the basic laws of Mechanics. The following are some of these principles that should make you technique study more productive.

This is a point in any object where it can be assumed that the whole weight of the object is located. For the barbell, the center of gravity is in the middle of the bar. This location is fixed an does not change no matter what position the barbell is placed in. The c.g. of the body is a completely different story. It can change quite a bit as the body moves. For example, in a standing man it is just above his waist. If he squats down, like into the starting position, it shifts forward and up. It's also possible that for some activities the c.g. can be located outside the limits of the body.

In lifting, it's also important to consider the combined c.g. of the athlete and the barbell, since once the bar leaves the platform they basically become one object. 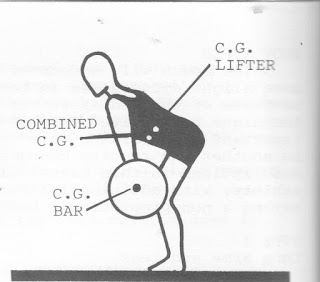 Knowledge of the center of gravity is important in understanding our next subject, balance.

Maintaining balance is one of the key skills the lifter must possess. Balance is dependent on the relationship of the center of gravity to the base of support. In lifting, the base of support is the area of the feet. If the lifter turns his toes far to the outside, he will really reduce the area of support in the front to back direction. This is critical in squat style lifting. The key point to remember here is that as long as the c.g. is within the limits of the base of support, the lifter is in balance. If the bar goes beyond the limits, the lifter will either have to move his feet to a new position or use a large amount of strength to keep his balance. This strength usage can really take away from pulling power. 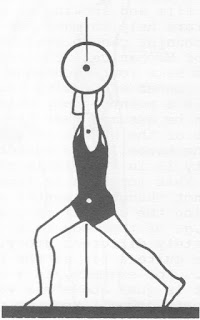 The overhead position of the bar in the Snatch and Jerk also presents some problems in balancing. With the bar at arms' length overhead, the c.g. of the athlete/barbell system is located quite high. It's a known fact that an object with a high c.g. is much more likely to topple than one with a low c.g. Therefore, when the bar is overhead the lifter must be conscious of his base of support and keep the bar over it. Another factor of science that applies to the body is that if you are stacking objects with different c.g.s, their most stable position is with all the c.g.s in one vertical line. This is why coaches for years have said to finish the split for the Jerk with the wrists, elbows, shoulders, and hips in one line when the bar is overhead.

Sir Isaac Newton found that for every action there is an equal and opposite reaction. 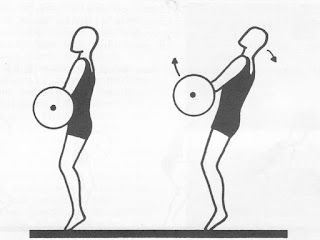 This concept is important in lifting, since the barbell's movement is very dependent on how the lifter moves his body. If the lifter moves to the rear the barbell goes the opposite way (forward) and vice versa. To lift the bar efficiently the lifter must learn to control his motions so that the bar moves in the proper path. Remember, it's not the fact that we have the bar moving back and forth that's important, it's the amount it moves. For example, with the bar at mid-thigh level in the Snatch, if the lifter throws his head and shoulders back violently the bar will go out away from the body a considerable distance, which is undesirable. On the other hand, if the athlete stays over the bar and moves the shoulders back with the proper speed and timing, the bar will only move away from the body a small amount, making for a better lift.


Next: an in depth look at the Snatch.