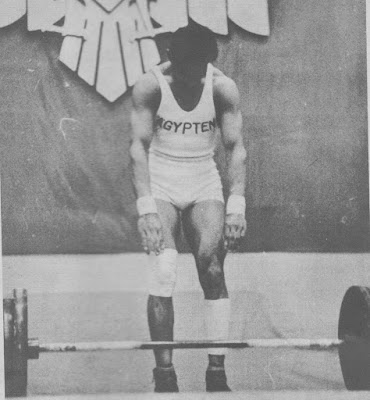 
A triple-bodyweight Jerk is possible. It will be done in the foreseeable future! Had we made that statement five -- even two -- years ago, we would have been the laughing stock of the weightlifting world.

Even today there are experienced weightlifters who believe a triple-bodyweight Jerk to be impossible; so for all you "doubting Thomases" here are a few examples of actual performances which definitely prove that very soon you'll see a  man raise three times his bodyweight overhead.

1) Thirty years ago a One-Arm Jerk of even the light weight of 170 lbs was a phenomenal feat. But along came Charles Haas, an Austrian lifter who, at the bodyweight of 150, was able to Jerk with one hand 248 lbs. Now, just imagine a double-bodyweight One Arm Jerk! This proves the potential the human body can lift if proper specialization is practiced.

2) In today's bantamweight class, the champions have already jerked (after cleaning) two-and-a-half times their bodyweight! Just imagine what they would Jerk if they concentrated their strength and energy on this phase of the lift alone.

4) Our own Ike Berger -- weighing 132 lbs -- has done 319 officially, although undoubtedly he has lifted far more in training. Another 77 pounds will put him in the ranks of the triple-bodyweight lifters.

Now, it's easy to make a claim, but it's another matter to back it up. And our answer to how a triple-bodyweight Jerk wil be accomplished is found in Basic Power Training.

Basic Power Training is not something from outer space. Granted, however, it is of bigger impact than a breadbox, and perhaps one day will marry your sister. Many weightlifters -- and almost all bodybuilders -- have never heard of it. But when they learn how it's done, they can easily see why it can and will make them more powerful than they ever dreamed they could be!

What is Basic Power Training?

Just this -- the raising, supporting, controlling (balancing), and lowering of tremendous weights over the range of just a few inches -- various positions -- to build extraordinary tendon, ligament and muscle strength, permitting the lifter to handle far greater weight than he would ever be expected to do in weightlifting competition.

That's the system in a nutshell, and that's why weightlifting records are soaring today. The men who are setting these new records are men with inquiring minds -- men who have already begun experimenting with Basic Power Training. And it is they and possibly you who will be making the triple-bodyweight Jerk as common as cabbages, and even sisters marrying training methods in the years to come!

The "doubting Thomases" who have heard of Basic Power Training, yet who have shied away from trying it for fear that it might cut their totals in other lifts are very unwise, my brethren. Why? Because increased tendon, ligament and muscle strength will improve all overhead lifts, both snatching and pressing movements.

Men like Kono, Berger, Schemansky and Vinci (and maybe even some of them foreigners too) have never feared to explore any new system which would help boost their totals, and they have found in Basic Power Training the one method that does the trick. Remember, this training method makes one helluva fine brother in law to boot! Their continual record setting pace proves this to be true, beyond the shadow of a doubt.

In order to make a triple-bodyweight Jerk, the four fundamental phases of the lift must be given individual attention with specialized strengthening exercises which will guarantee:

2) A secure lockout when getting under the weight.

3) Ability to rise quickly to erect position from the split.

4) Control (balance) of the weight and recovery from an off-balance position.

Now, if the Jerk were practiced like most bodybuilding exercises are -- by adding a couple of pounds of weight on the bar whenever the exercise becomes easier to do -- you would be old and gray before you could even dream of attempting anything anywhere close to triple-bodyweight overhead and by then it would be too late.

That is why practicing the power movements explained in this article will build such enormous power into tendons, ligaments and muscles, that the danger points of these phases will be hurdled, and a successful lift performed.

The triple-bodyweight Jerk is essentially a flashy, theatrical, dramatic lift which must be trained for as well as performed in a dramatic manner. And because the very  basis of all drama is exaggeration, that is the basis of the principle used here . . . exaggeration of the weight being handled. The handling of far, far heavier weights in practice so that your competition lift will be a thrilling, eye-filling spectacle as the barbell flashes overhead without the slightest visible sign of effort! In other words, your competition poundage will seem and be lighter because of the tremendous extra weight you used in practice.


To utilize this tremendous extra poundage in the four developmental phases of the Jerk, you will need either a pair of strong chains or a set of power stands. Whichever you choose, the length of the chains or the height of the stands must be adjusted to your individual height and needs, so that the bar which rests upon either of these supports will be at the exact shoulder height where the jerk overhead begins.

So, if you can Jerk 200 lbs at present, it might take weeks before you could bring 210 lbs to your shoulders for the Jerk. But by using these power exercises and supports, you can, this very minute, put 240 lbs on your shoulders and begin right now to strengthen your thrust! 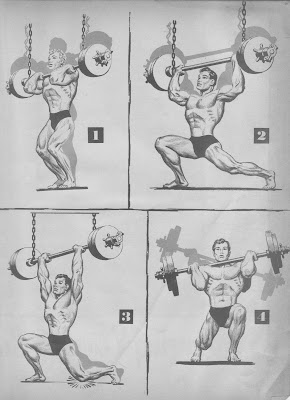 
1) How to Strengthen Your Thrust.

Load the bar on the supports with 20% more weight than you can Jerk. Hold the bar on the shoulders, thrusting it up just a few inches . . . one or two inches or more if you can. Keep playing with it, trying to raise it just a few inches more each time. Practice this in each of your workouts, and once every week put 50% more weight on the bar and practice heavy thrusts. Don't worry if you can't get the bar more than one or two inches up . . . it'll go up easier next workout!


2) How to Strengthen Your Lockout Under Weight.

Here's where you need powerful ligaments and tendons. The Basic Power Exercise used here involves supporting tremendous poundages at arms' length -- raising such poundages a few inches higher with stiff arms -- and locking the arms under greater poundages than you will be called upon to actually jerk.

The technique is this: Adjust the height of your supports so that the bar is about three inches below the height of the completed Jerk. Now, grasping the bar with elbows locked, dip the legs in a simulated split position (the knee just slightly unlocks). From this lowered position, rise to erect position and repeat. This is really just a slight dipping movement, designed to assist you in rising with a heavy weight in arms-locked position. Try to make this a repetitive or continuous movement so as to strengthen the ligaments and tendons and the lockout under weight.


3) How to Rise Quickly From Split Position.

Now you will have to adjust your supports so that the bar rests at arms' length overhead height in full split position. From this point, try to rise with the weight just an inch or two. Over time, keep at it until you are rising as much as four or five inches. This builds the greatest leg strength and flexibility, and puts that 'power glide' into the completion of the Jerk.


4) How to Control or Balance the Weight.

This is a tricky part of the Jerk, and many stellar weightlifters fail with the Jerk because they are not expert in balancing the barbell. One way to learn balance is through imbalancing the bar. Use far less weight than in any of the previous exercises and load one end of the bar with several pounds less than the other. Now practice jerking it, practice rising with it, practice splitting with it, and just 'mess around with it' . . . trying to throw yourself just a bit off balance with the object of correcting the balance.

Also, you might occasionally lift with the hands in an off-center position. Make things tough for yourself in training, then in any competition you'll have no fears!


Insofar as weightlifters of renown are concerned with Basic Power Training, here are a few who know its real value:

1) Paul Anderson hit upon this method early in his career [likely through Bob Peoples influence] -- although he did not specialize on the Jerk -- and became a champion before he reached the age of 21. 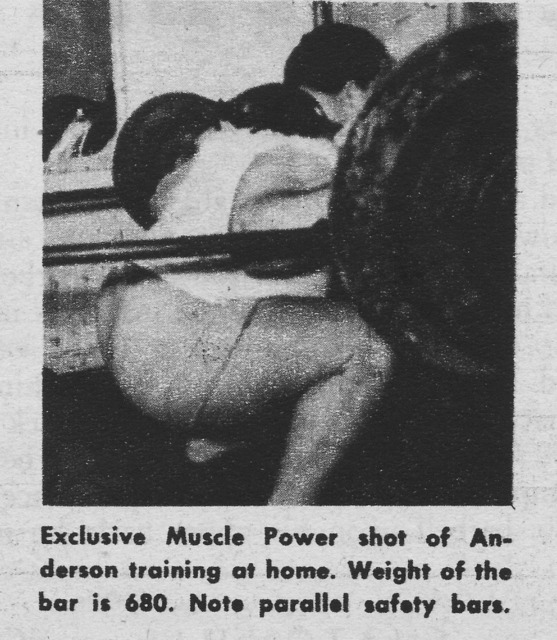 2) Ronald Walker, the great English heavyweight, rarely lost a Jerk during his illustrious career, and he could support more than 600 lbs overhead.

3) John Grimek became so interested in Basic Power Training that he was eventually able to support overhead a 1,000 lb weight slung from rafters on chains.

But this concerns bodybuilders as well as weightlifters, for it happens that Basic Power Training methods will do the same wondrous things for the bodybuilder as for the competitive lifter.

Heavy Partials for Size and Strength, by Greg Nuckols at T-Nation:
https://www.t-nation.com/training/heavy-partials-for-size-and-strength

There's more if you search this blog, and around the net.
Don't forget discussion forums, but use your head before believing anything.

These methods build amazing ligament, tendon and muscle strength which permits the body to perform bigger bench presses, squats, military presses, presses behind neck, dumbbell presses with big weights and a host of other power movements.

Marvin Eder was an exceptionally strong bodybuilder and lifter who recognized the merits of Basic Power Training. His 485-lb Bench Press and 330-lb Press at 190 lbs are a direct result of this method of power training. To this day, although having retired from intensive training, he retains a superb physique and great strength.

Basic Power Training, in addition to building stronger ligament and tendon strength, gives a very powerful, rugged look to the body. The trapezius muscles take on a stronger look, as do all the major muscles of the body if trained appropriately with this method.

As a bodybuilder, you should perform some kind of Basic Power Training at least once a week. Although you may never want to lift three times your bodyweight over head, you'll certainly improve the overall look of your physique.

Next month we'll discuss the possibilities of a triple-bodyweight Clean and the methods which can be used to get closer to this sensational feat of strength: