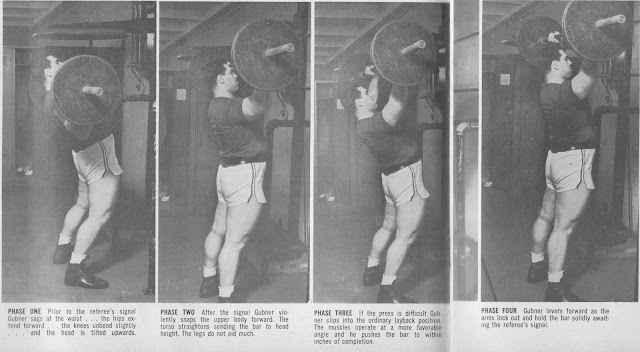 In the long history of weightlifting only a scant seven men have up to now attained the 400 pound Press level. Of these, two are retired from active competition (Anderson, 408, and Vlasov, 434.5), and two have executed lifts of suspect nature (Andreev, 437.5, and Dube, 400). In fact, Andreev, the rotund Soviet newcomer who is nominally the world's record holder failed three times to press 396 at the European Championships, and had to settle for a meager 363 at a subsequent meet. Norbert Schemansky's superb 402 pound effort was executed several years ago and injury-ridden Norb does not figure to duplicate it. It is said he may soon retire.

Put together, all these facts mean that 23-year old Gary Gubner, the 280 pound ex-shotputter who pressed 419 at the North American Championships last September 25, and 418 at the Tehran World Championships where he placed second with a terrific 1201 total, is the best heavy presser in the world today. He is also the lightest by far of all the men who have pressed over 410 pounds. Zhabotinsky, for example, weighs over 350.

Gubner comes upon this title honestly -- or dishonestly -- depending upon your point of view. If we assume that no lifter can muscularly elevate 400 pounds in true military fashion then Gary deserves the nod, because his pressing style is superior to the assorted rough heaving techniques used by most heavyweights -- and he presses the most weight.

He does not employ an obvious 'jerk' form like Andreev, or a questionable 'body sag and bounce-the-bar-off-the-chest' method a la Dube. Amongst all heavy pressers of recent decades Gubner ranks fourth in subtly getting white lights from the judges. At least in this writer's opinion.

Jim Bradford was unquestionably the strictest presser of postwar times and no lift he executed was ever turned down for spurious performance. His technique was simplicity in action. A majestically high split clean was followed by assumption of a slight lay-back position. Then, inch by inch, Bradford grindingly raised the bar overhead. Who today could elevate 396 pounds in such exemplary fashion?

Paul Anderson rarely had lifts turned down. With 350 or more pounds of bulk assisting, even slight body action carried his 400 pound attempts to head height.Then, turning on the incredible power of his enormous triceps, Anderson locked out the bar. He used little visible heave and minimal back bend.

Yury Vlasov was a master at sneaking monstrous weights past the judges. Many thought his 434.5 pound record at the Olympics was an amazing feat of strength. Slow motion film revealed it truly was amazing -- insofar as how the judges missed all the jerking action, including chest sag and knee snapping that Jury used to make a three white light success.

George Cohen, Gubner's mystical training mentor, pegs Gary for a 440 Press before long but thinks Zhabotinsky will do just as much. "However, owing to Gubner's more compact physique and shorter arms he should eventually surpass the Russian somewhere beyond the 200 kilo level. If Gary would drop all shotput considerations and allow his weight to escalate 20-30 pounds, he could beat out Zhabotinsky for the world crown," Cohen opines.

Gary came by his pressing style naturally. It is not as refined as Tony Garcy's snap technique nor as precise as Schemansky's body jolt. But he is pressing world record poundages successfully and consistently. He completes more presses and gets more of them passed than ever before so there is little to complain about.

Before analyzing the four-phase technique Gary uses it is interesting to note one lifting characteristic all the 400-pound pressers have in common. All use a full squat clean to get the bar in pressing position (an exception is Schemansky, who usually splits). For the precision stylist like Vlasov and the well balanced lifter like Anderson this poses no particular hazard. But for Gubner, basically a sloppy cleaner who missed two Press cleans at the Senior Nationals last June, it is a trouble spot. Look for his Press marks to really soar if and when he masters the art of smartly fixing the weight at the chest.

Gubner steams up backstage for all his presses. Once on the platform he shows a determined but relatively calm composure. He hovers over the bar for a second, then grasps it with a hook grip.

He assumes the classic head up, back flat pulling position and with little hesitation tugs the bar to rib height and squats under it. In the full squat position he adjusts his balance before beginning to rise.

Once erect he takes a stride or two to regain his balance and secure the bar at the chest (this practice should be discouraged). Once the legs are motionless he waits for the referee's signal. This period lasts for a half-second and Gary is busily at work setting up for the pressing explosion to follow. He starts to sag at the waist and sets his upper body back at the hips. For a really big effort the knees unlock slightly. (Weightlifting purists: Don't flinch. Everybody's doing it.).

Study the photo of Phase One carefully. It is the key to a successful Press. There is a balance involved which must be felt rather than described. Regardless of when the referee claps Gubner must settle into this position. If he claps to soon Gary will continue sagging until he is ready. If he claps too late Gary may have to come somewhat erect, then sag again.

When the position is right, Gubner suddenly and violently explodes forward, ramming the bar to nose height. The power comes mostly from the explosiveness of the back straightening. Gubner does not fell the attendant extension of the knees has much to do with blasting the weight. They were originally unlocked only to slip into a comfortable and efficient starting position, not to provide extra impetus. The knees do not snap to lockout as in a Jerk. They passively extend as the body comes erect.

On a smooth lift Gary will be able to nearly military Press the bar from head height to completion. More often than not small hitches will occur which require the third phase of this technique.

If the transition from body-blast to arm-push is not smooth Gubner will lapse into a backbend of  varying degree to finish the lift. His bend is minimal compared to many of the lighter lifters, notable Veres, Baszanowski, Zielinski, etc. He does not truly bend away from the bar but rather sets himself in a muscularly advantageous position to press it out. Training efforts with 400 pounds in the High Incline Press generally assure success once this point is reached.

As the lift nears completion Gubner levers forward and pushes the bar to arms' length.

Some Outspoken Commentary on Officiating Deficiencies

This sequence of maneuvers comes off in rapid order and infractions of the rules are hard to spot. In fact, by contemporary pressing standards very few rules are broken. Those completed presses of Gubner's which fail are usually turned down because the bar has stopped for an instant.

This is an absurd reason to reject a lift. It is an anachronism left over from the military pressing days of the 1930's. A bar which halts shows the lifter is working and pressing the weight -- not jerking it -- and deserves favorable consideration compared to an effort which sees the bar propelled to lockout only as the result of an ugly all-out body heave (often with a right-angle backbend thrown in for good measure).

All lifters -- especially those predisposed to making bar-halting presses should squawk if their lifts are failed for this reason if at the same time roughly made jerk-presses with big backbends are permitted. Each lift violates the (frequently unrealistic) rules, but if officials are going to overlook certain violations let it be the ones which conduce [help to bring about] less to an errant Press.

When a lifter utilizes a certain set pressing pattern he should practice it with light, medium, and heavy weights, just as he practices the Snatch and the Clean and Jerk. In its most sophisticated state the Press is no less a technical lift. Aside from constant style practice of the Press, various supplemental exercises can be used.

One is to hold a light bar overhead, then lower into degrees of backbend or hip sag. This should also be done with with the bar across the chest to become more familiar with the position and to induce back flexibility. In both exercises stretch further than you ever would in competition. Style practice is something quite apart from strength training, however. Most time should be spent pressing in relatively strict form to build maximum power. Incline pressing is valuable too.

The proper pressing style will see most lifters add about 50 pounds to the best lift they can muster in strict style. One observer claims Rudolf Plukfelder, who has done 341 as a lightheavy, cannot manage 286 strictly in training. Nor can lightweight Sergey Lopatin, 306 in competition, handle 231 strictly in the gym.

What does it all mean? It means if you want to compete with the Big Boys you have to lift like them. Put so-called moral considerations aside. In sports there is no point handicapping yourself with worry over a rulebook. The judges don't enforce it anyway, but no one loses out since all have the opportunity to learn and use the techniques which result in increased Press marks.

Adopt a style comfortable and natural to you. It should be based around the one just described, with individual variations. This is the way most competent lifters regardless of body structure of match temperament are pressing. Avoid "dead giveaway" extraneous motions, like bouncing the bar off the chest, which are easily spotted and disqualified. Work for a smooth technique . . . each part of the lift blending smoothly into the next. Minimize backbend and put as much "press" into the effort as possible but use enough "starting position blast" to be sure the Press will be completed.

Note the distinction, however, between an all-out heave and kick which is nothing short of a Jerk without actual knee dip, and a well-executed, carefully planned athletic body snap which blasts the bar through a basically static body position. Do not utilize the former unless the judges are blind, ignorant, or both. Never practice it either to avoid being inculcating bad habits. But do learn the 'bow and arrow' method or its variations. It is an openly accepted part of weightlifting and absolutely necessary for competition in today's era of double bodyweight Presses.

Not everyone can expect to Press 400 pounds, but by taking advantage of the whiplash capabilities in the human body, and the relaxed rules and attitudes now in force, near-immediate gains of 10 to 50 pounds can be yours.