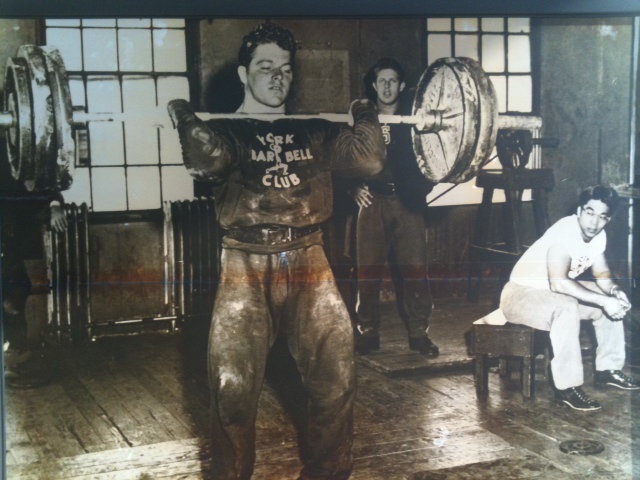 There was a time when anyone who could rightly claim that he was an office employee of the York Barbell Company was immediately the object of considerable envy by a sizable portion of the grass roots barbell world. This was especially true if the "anyone" was not an up-and-coming Olympic lifter, powerlifter or bodybuilder going in.

To certain generations of iron pumpers, the daily opportunity to work alongside and hear the thoughts and reminiscences of legendary figures like John Grimek, Steve Stanko, John Terpak, Harry Paschall, Gord Venables or Bob Hoffman himself would be viewed as a priceless experience.

Recognize, to, that later generations might have been equally enthused at the chance to rub elbows early and often with Bill Starr, Bob Bednarski or Tom Suggs, as well as some other York "fixtures" who were only slightly less prominent. Guys like Olympic coach Dick Smith and former lifter/gym owner/contestant promoter extraordinaire John Terlazzo also added volumes of insight to any iron game-related conversation.

Oh, yes, and let's not forget the vaunted York Barbell Club Gyms (Broad Street and Ridge Avenue), where magnificent out-of-town and indigenous physical specimens forged their reputations. These hallowed proving grounds of musclemen and strongmen for so long were only a flight of stairs away from lucky office personnel.

Yes, these persons (as well as numerous others) and featured gym facility forged the basis of the renowned YORK MYSTIQUE created so prominently in the pages of Strength & Health magazine by Bob Hoffman.

Note my capitalization of "York". I'm told that contemporary internet etiquette frowns on the capitalization of words, viewing it as the equivalent of shouting. Within the Iron World there was a time when the York Barbell name was commonly spoken of in capital letters and revered above all others in that realm. And as I'll demonstrate shortly, held in this high regard well beyond the might and muscle game.

Granted, that era is long in the past, but as very probably the last person to fit that presumably "exclusive" category mentioned in my opening paragraph, I have extensively pondered . . . when did The Great Fade begin?

This question took on a whole new life of its own for me when, about 2005, I took a support staff position at local Dallastown High School (alma mater of Bill March, class of 1956), when one of the principals who had an extensive background in competitive sports, including powerlifting, asked me, "Were you at York for some of the glory years of just the decline?"

Similarly, over time I had been asked often what it was like working for York Barbell. Inwardly, my mind sometimes conjured up Charles Dickens' famous "It was the best of times, it was the worst of times . . ." line from his "Tale of Two Cities." However, my verbal responses were tempered, focusing on the first part of the quote. Still, one is forced to reflect.

Over the past several years I have occasionally highlighted the serial array of missed/ignored opportunities, prevailing thwarted thinking and a bit of "dirty laundry" which contributed to York's downward spiral on the Iron History Forum website, so I'll refrain from recounting all of that here. Quite the contrary, I'm intending to recount many positive testaments to the staying power of the York name.

Having said that, there is one irony of ironies which must be pointed out: Sad to relate -- a favorite Hoffman expression which cropped up in his writings and is strikingly apropos in this anecdote -- but mainstream culture here and abroad was beginning to embrace strength/fitness in a heretofore unprecedented way at the exact time in history that the York Barbell company (and Bob personally) was retreating.

To a lot of people (and, frankly, some of these people should know better), the onset of the bodybuilding documentary "Pumping Iron" and Arnold Schwarzenegger were the triggers of the aforementioned phenomenon. While this flick and Arnold may rightly be called "catalysts," the real trigger was burgeoning on college campuses across America in the 1950s and '60s as suddenly there was a swell of academic interest in human and exercise physiology, biomechanics, athletic training and physical therapy specialties, as well as the start of a plethora of research spinning off these courses of study. This occurrence spawned a decided expansion in the parameters of the term "physical education."

Summarizing, the Baby Boomer generation brought their "strength/fitness for life" mantra from the classroom to the marketplace, which, over time, responded in a big way . . . and York was receding noticeably.

Yet against this more or less depressing in-house backdrop, I experienced my own irony of ironies when interacting on behalf of the company with the outside business world. Beginning around 1978 and continuing or the ensuing 20 years or so, I was increasingly thrust into the role of company representative which garnered me VIP access and participation in a wide variety of their functions, organizations, pro and major college sports teams and their coaches and their facilities, higher profile lifting and bodybuilding promoters, athletes and events, mammoth commercial fitness shows, football clinics, strength & conditioning clinics . . . during the course of which I met all manner of celebrities.

Almost without exception I was shown more personal respect than I rightly deserved because I was the "York guy," and I began to comprehend the extreme level of regard the company for which I worked commanded among much of the "outside world." For example, when checking into the better hotels in major metropolitan areas, upon learning that I was from York, PA, desk managers would often spontaneously ask if I was with the barbell company or the local air conditioning giant. Much like York Barbell, York Air Conditioners had a national reputation for years.

Even when socializing with salesmen from other far-flung industries while waiting for flights at airports, I had instant acceptance because they well knew the reputation of York Barbells.

It was remarkable: either a lot of the outside world didn't realize just how far York had fallen, or if they did -- and a lot of players in the fitness industry had to -- a striking number retained (perhaps sentimentally) heroic aspirations for the "Strongest Name in Fitness," that it would somehow regroup and get up off the deck. Lord knows I did!

To reiterate, I was amazed at how many inside/name folks in pro sports, bodybuilding, competitive lifting and strongman, major supplement corporations, other equipment manufacturers major and minor, the occasional well-placed exercises physiology researcher, various fitness-oriented entrepreneurs, advertisers, etc., sought me out in the hope of establishing some kind of viable business relationship with York Barbell . . . when it was clearly sinking.

However, to my mind, the greatest single testament to the unbelievable drawing power the York name once possessed, and retained for much longer than it deserved, was demonstrated by the gubernatorial and national level political class. Despite being a staunch Republican, Bob and York Barbell had admirers on both sides of the aisle.

While he was invited to the Nixon White House on a couple of different occasions, Bob was previously a member of President Kennedy's Council on Physical Fitness. Several years thereafter when President Johnson accepted an invitation to attend a southern York County town's centennial celebration, while traveling down interstate 83, he had his motorcade stop and take pictures of the lifter spinning on the roof at the York Barbell facility.

That said, I would like to relate an exchange I had with Pennsylvania Governor Tom Ridge in 1997. During the Ridge administration, our state capital in Harrisburg celebrated "Fitness Week," which culminated with a 5K run through the streets of the city. By the way, at that stage of his life, Governor Ridge trained his upper body with barbells and dumbbells and retained sufficient overall fitness to take part in the 5K run without embarrassment.

To augment the festivities, the organizers invited a number of sales representatives from fitness equipment manufacturers, personal trainers, commercial gyms and the like to display their goods or services on the final day. So, there were reps from about two dozen firms manning booths on the massive circular steps leading up to the rear entrance of the actual Capital building itself, which was the race's finish line.

When the race concluded, things wound down fast, with most folks starting to hunt for lunch. As we were breaking down the booths, suddenly Governor Ridge bounds up the steps, executing what amounts to a "thanks for coming" jog-by with the exhibitors. The dash-and-wave stopped when he came upon the York booth, which was handled by myself and Kevin Price, manager of York's retail store at the time.

In an instant, I found myself shaking hands with Governor Ridge, who made it clear that he intentionally sought us out as he had met Bob Hoffman a few times at various functions, was aware that he has passed away and was wondering how his Barbell Goliath of a company was holding up under the prevailing tide at the time of manufacturing jobs fleeing overseas and having to compete against foreign imports, which at that point was wreaking havoc with the economy of the Keystone State.

This face time with the Governor continued for a good 15 minutes. If you know anything about how how political functions are choreographed, and the at-arms-length distance politicians are kept from the crowds at their own rallies, Ridge taking this much time from his obviously busy schedule to engage in direct conversation out in the open, sans any press secretaries or other functionaries to "protect" him from bad situations, signaled to me that he clearly respected Bob and his company.

By the way, if Tom Ridge's name looks familiar but you just can't place in what context you know it, he was the first Director of Homeland Security.

One final anecdote concerning the drawing power of the York Barbell bran among nationally known politicians . . . a year of so after the Ridge meeting, and in response to trouble the company was having with the U.S. government adhering to the rules of the GSA contract (which are set by Congress), York's owners at the time began mounting their own media campaign to bring the problem to public attention. Testament to the clout of the York Barbell name -- even as the 21st Century drew near -- was demonstrated when longtime Pennsylvania Senator Arlen Spector was invited to appear on behalf of the company at a supporting photo-op event at I-83 headquarters . . . and he took time from his hectic schedule to show up. Literally, I couldn't believe it when he walked through the doors of the retail store.

My overriding message in the above is to underscore just how much cache Bob Hoffman and his corporate creation accrued and amazingly enjoyed in the business/political worlds long after iron gamers were lamenting his and the company's vastly diminished capacity. Of course, this begs the question as to whether York Barbell would enjoy exponential prominence today if different, more progressive managers were at the helm fifty years ago. My sense of it is, perhaps, but it would certainly look vastly different than the founder knew it. My best guess is that Bob Hoffman's York Barbell was the kind of creation which had its time and its individual hourglass of history just ran out of sand.