Jerk
Forward on Toes During Dip & Drive
Pressing Out
Bar Ends Past the Frontal Plane
Split Position Imbalance, Inconsistencies, or Discomfort
One Foot Strikes Before the Other in the Split Jerk
Losing Contact with the Bar During the Dip & Drive

In a previous discussion on the Snatch, we pointed out that the shoulder-width grip permitted a more powerful pull owing to the favorable leverage. See Diagram 1 on the left below: 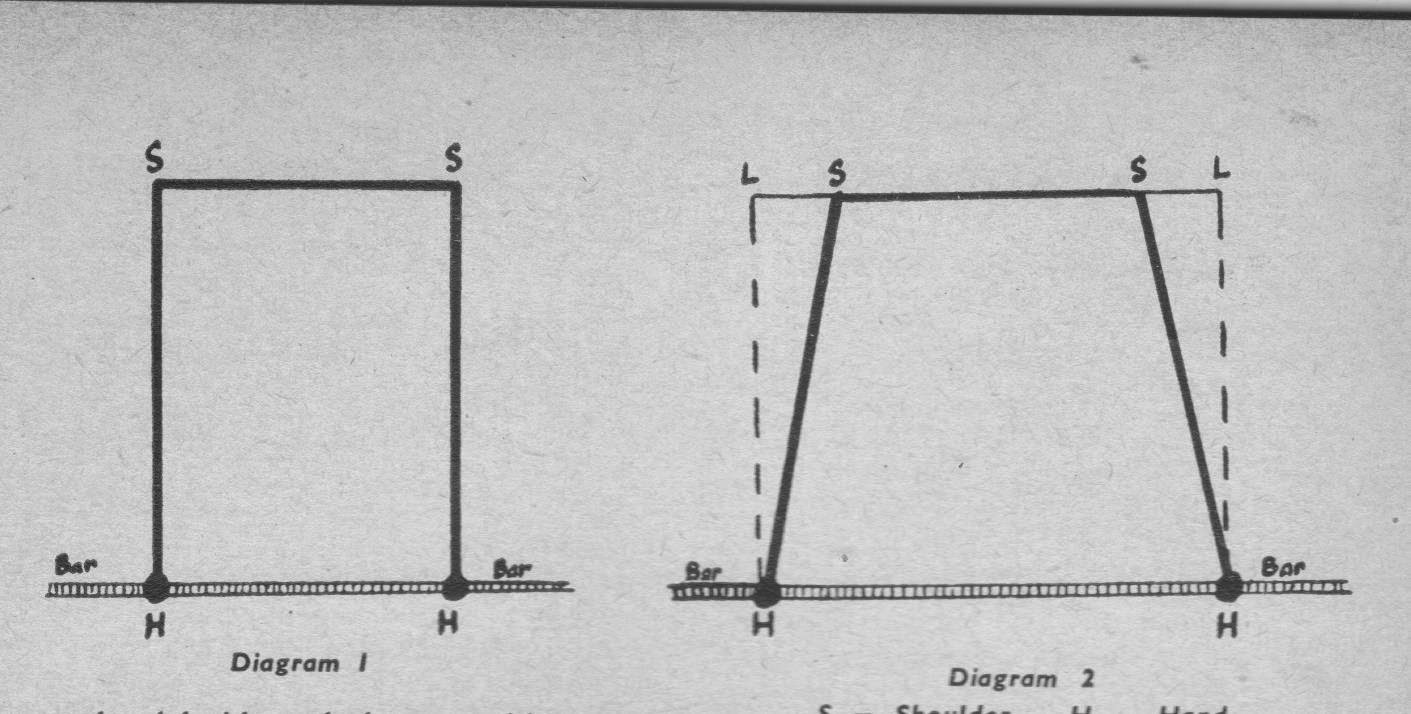 With the hands vertically below the shoulder fulcrum, the pull is directly transmitted to the bar and makes full use of the power of the shoulders and back. With a wider grip, the length of the lever acting from the shoulder fulcrum is increased and the longer a lever the more power is required to move the weight at the end of it. See Diagram 2 on the right above.

However, there are other factors which must be considered when making the clean to the shoulders. The shoulder width grip is most advantageous for the first part of the pull but as soon as you the elbows start to bend and the upper arms raise for the continuation of the clean, that grip can be a hindrance instead of a help. With a narrow grip the elbows are forced out wide very early in the clean in order to articulate. This weakens the pull. Then, when the bar is dropping onto the chest and the elbows are being thrust forwards to help fix the bar, the narrow grip will further impede the elbow action. In fact, with a thickly-muscled lifter there may be considerable friction between the arms and the latissimus dorsi.

We can remember Alf Knight losing a vital clean in the British championships for this very reason. 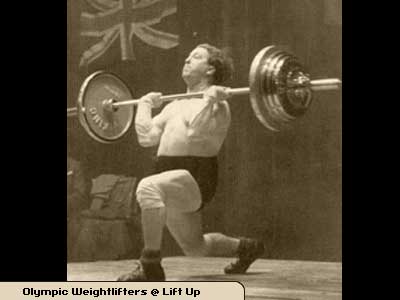 
He had a narrow grip on the bar and when he pulled it to the shoulders, there was a split-second delay while his arms worked their way past his trunk. But that split second was just a little too long this time and the bar, insufficiently supported and not properly fixed, dropped back to the platform.

Just two or three inches added to the width of the grip can help the lifter to overcome these difficulties of shoulder and elbow articulation. The upper arms and elbows can work more easily together, enabling the elbows to come forwards more quickly. The wider angle from the shoulders also avoids undue friction between the inner surface of the triceps and the latissimus dorsi.

There are further disadvantages arising from the use of too narrow a grip. Owing to the difficulty of getting the elbows to bend forwards under the bar, some lifters, in an unconscious effort to give the elbows more room, tend to swing the bar forwards away from the body. Others sway the trunk backwards. Both of these practices are bad mechanical faults which interfere with the pull and also hinder the correct timing of the leg action for the split. With a slightly wider grip it is possible to pull he bar up close to the body, or rather it is more accurate to say it is possible to keep the body close to the bar during the pull which will allow you to conform to the guiding principle which we previously laid down for the quick lifts -- the closer the fulcrums (i.e., the joints) approach the line of pull, the more favorable the leverage.

When the bar is turned over onto the shoulders with a narrow grip, the forefingers may be resting between the bar and the shoulders, which can be quite painful. Also, the bar is being supported at two points only with the arms still bearing a large proportion of the weight, when they should be momentarily relaxing prior to the effort of the Jerk. Whereas a wider grip will free the forefingers from the pressure of the bar which can then rest on the deltoids and chest, a wide, solid support that relieves the arms of the extra exertion, enabling them to conserve energy for the jerk.

In our analysis of the grip for the Press

we explained how the wider grip permitted a firmer and more complete extension of the arms. While in the Snatch for similar reasons, the wider grip allowed the elbows to articulate correctly during the swift upward extension. These factors combine in the Jerk. All too often have we seen a good Jerk, correctly timed and directed, go right to arms' length and then bounce out of lock because the narrow grip prevented the elbow joints from reaching and holding a really complete and solid lock. With the arms up close against the ears, the head of the humerus is in a weak position in its socket, but a slightly wider angle allows the head of the humerus to settle in more firmly with less strain on the surrounding tendons and ligaments.

When the arms are extended, the angle of articulation between the ulna and the humerus takes the forearm out of line with the upper arm.

When the arm hangs down palm forwards the forearm is directed outwards away from the body at what is known as the "carrying angle."

This "carrying angle" is still present when the arms are above the head supporting a barbell. In some lifters it is so apparent that we say they have "knock-kneed" arms. Slightly "knock-kneed" arms are an advantage to a lifter because they ensure for him a firm lock. The "carrying angle" of the forearms results in a greater distance between the hands than there is between the shoulder joints when the upper arms are extended vertically overhead. Any attempt to being the hands closer in to match shoulder width will prevent the elbows going right out to full extension and it is this type of "soft lock" that often causes a bar to bounce back or drop back from what appears to be a perfect jerk. Therefore, it is much safer to adopt a grip that conforms to the angle of your forearms when extended above your head.

Even those who have fairly straight arms will find that a slightly wider grip will give them great stability in the Jerk. Examples of men who have widened their grip with consequent improvement in jerking and supporting power spring readily to mind -- world champion Namdjou is one. 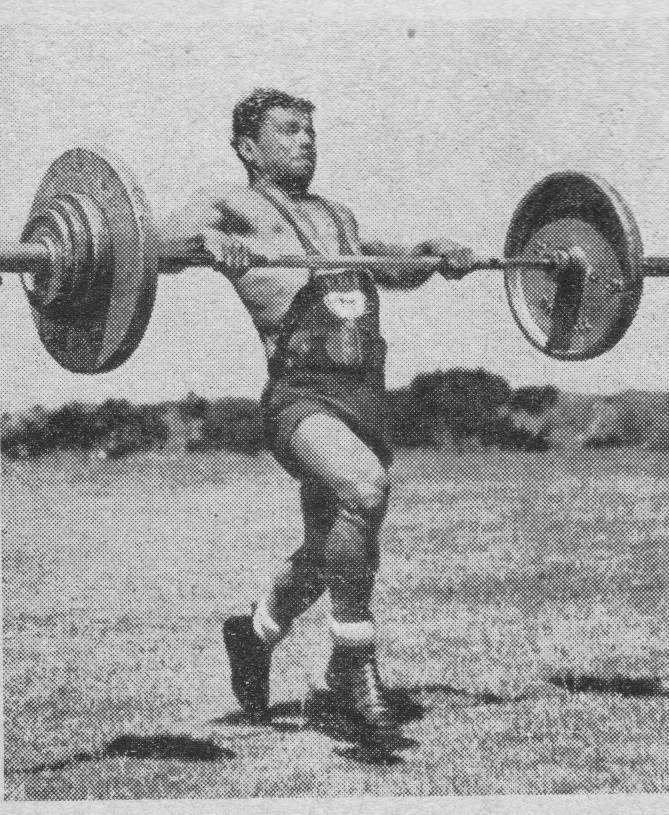 He widened his grip after failing to place in the 1948 Olympic Games. Namdjou's wide grip also enables him to maneuver his trunk very close to the bar during the clean and to turn his elbows under quite easily and smoothly. See photo above. Another technical point worth noting in this photograph is the way he is driving from the rear foot forwards and under the bar.

Mel Barnett is another. Since the great Russian lifter Vorobyev adopted wider grips both for his Snatch and his Jerk, he has set up many new national records and near-world records on both lifts. All these considerations greatly outweigh the solitary advantage of the narrow grip -- a stronger pull in the first part of the clean.

We advise the following procedure to determine your most favorable grip. Take a shoulder width grip, then move the hands out an inch on each side. This is your basic grip. Just the one inch may be sufficient for you. Try this grip in several workouts and see whether you can turn over your elbows smoothly during the clean. Ensure that you have room between your hands to rest the bar on your deltoids and chest. Get your instructor or a training companion to watch your arms during the Jerk to see that there is a firm and complete lock at the elbows. If you find that the elbow action or overhead arm lock requires it, widen the grip again and continue practicing over a period until you reach a width of grip that feels comfortable and secure at all stages and which allows a happy medium of efficiency in both the Clean and the Jerk. 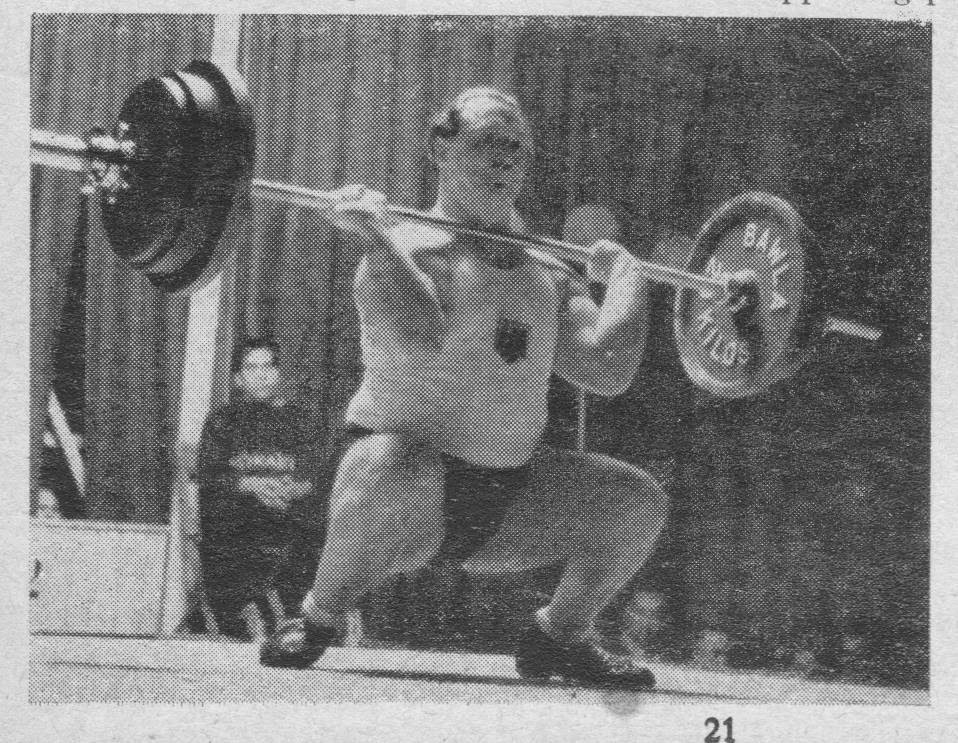 The angles of Heinz Schattner's forearms show that he has taken a very wide grip, but he needs it. He is very wide-shouldered to begin with and he needs the extra width for his thick arms to pass cleanly past his trunk. 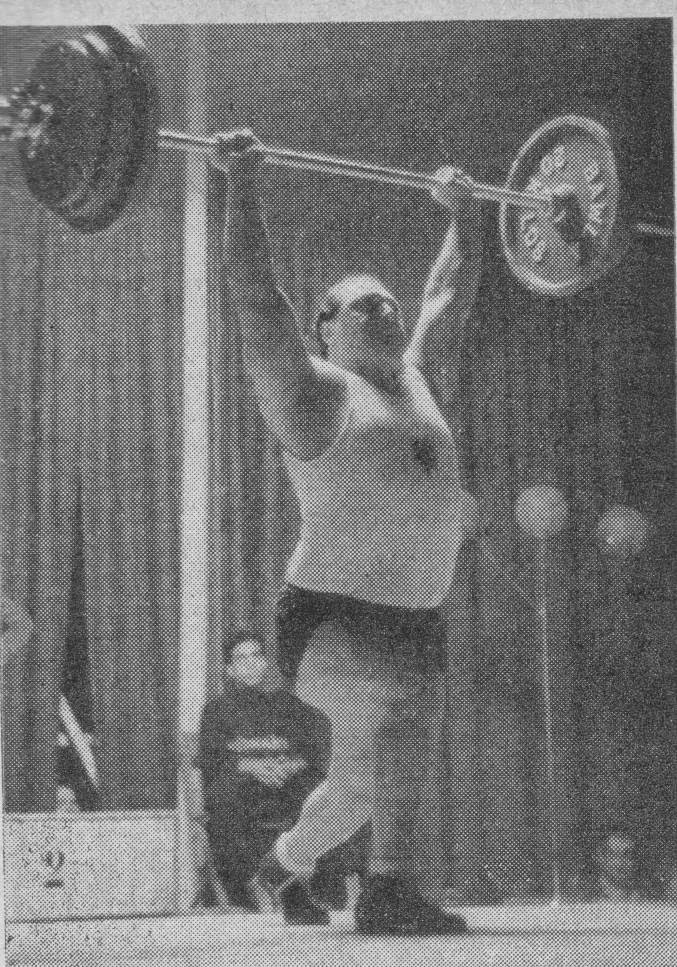 Here you can see that Schattner's wide grip gives him a very stable overhead position that conforms to his shoulder and elbow articulations.