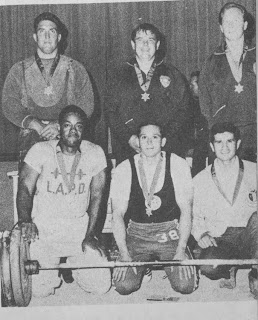 Here are some tips that may help you to shock some growth into your triceps. Choose one exercise per group below. Start with four sets of each movement doing 8-12 reps. During the second month do five sets per exercise (15 total sets). These exercises should be performed in a tri-set manner (one right after the other). Rest only 15 to 30 seconds between tri-sets. You must beat the recovery rate for maximum hypertrophy. Hit them relentlessly with little rest.


Another point I might make is that a split routine will allow you to specialize more thoroughly without undue fatigue. You will have more time to grow and won't be so inclined to fudge on other bodyparts. This doesn't mean you can't work all bodyparts each workout three times per week. George Watson of The Gym has 19" pumped arms with amazing triceps. He trains 2 hours per workout 3 times per week on the total body and does arms at the end of his workouts. Deputy Paul Anderson of the Ventura Sheriff's Department trains only two to three times per week on the whole body and he has tree trunks for arms. Dan Mackey and Boyer Coe seem to like splitting their arm workouts doing triceps and perhaps forearms one day, and biceps the next (usually on back day due to the rowing and chins). Larry Scott would work delts, arms, and calves two times per week.

When I trained with Dave Draper we would do chest, delts, triceps, and biceps two to three times per week as part of a split. We'd do back, legs, and forearms on opposite days. Little needs to be said about Dave's arms; he learned many things from the all-time big-arm champ - Leroy Colbert. Dave's arms are huge, cut up and have unusual striations that writhe and tense as he uses them. He has the most dramatic set of arms I've seen and I've seen them all. Dave couples this amazing development with unreal vascular development. Watching him work on furniture is like seeing Sandow putting on an exhibition, although Dave is oblivious to what he looks like while he works because he is totally into his thing - as he is in his training.

Personally, I like to do chest work before arms because the chest work hits the deltoids and pre-pumps the triceps. I follow my chest routine with some dumbbell pressing (5-10 sets), triceps (usually I do three giant sets, or two different types of tri-sets), and then biceps are done last in a superset fashion. When I get a sticking point I switch to giant-setting the triceps. To my knowledge, Dave, Gene Mozee and myself were the first on the West Coast to fully experiment with giant sets. Ricky Wayne also uses them extensively.

Here's my 6-week giant set routine. Do one movement right after the other without rest until all seven are done. Rest 15-30 seconds and do it again. Two or three giant sets are plenty.

After all the giant sets are done then I will finish off doing maximum reps in either the triceps dip on parallel bars or single dumbbell one-arm extensions.