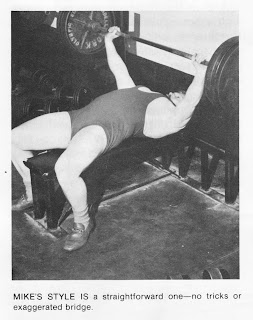 
Just as art imitates life, those who train imitate those who are exalted in the pages of the muscle magazines. It is believed that the stars of the bodybuilding and powerlifting worlds "wouldn't say it in a magazine if it weren't true." It is further taken as gospel that the recommendations made by those men and women - who are a cut above the rest - are, or should be, "the way it is." Of course, nothing could be further from the truth.

Many years ago, a man with a well-developed musculature was rare, primarily because the number of those engage in strength and muscle building activities was small. However, as the population sample of trainees grew through the years, so did the number of well-developed men. It was assumed that there were "good physiques" on the scene because of modernization of training techniques, nutritional manipulation and hormonal experimentation. The truth, though, is that the relative proportion of extremely well-developed physiques is almost the same as it was 25 or 30 years ago. However, the absolute number has increased due to the explosion in the number of individuals now involved in weight training.

Although many new theories of training have been propagated as an explanation for the supposedly sudden improvement of the "average" physique, the truth about strength training has not changed - one must work very hard on a number of basic exercises which stimulate the major muscular structures of the body . . . eat sensibly . . . get adequate rest . . . and remain motivated to train in progressive and productive manner.

However, if you have bought the notion that there has, in fact, been a major change in human physiology, which explains the efficacy of the "new and improved" training programs, you probably copy the leading lights of the sport and do the exercises they do . . . and in the manner in which these stars do them.

Although many exercises are dangerous if performed in a competitive manner, the bench press is perhaps the most dangerous. The bench press? One immediately thinks of a missed squat pinning a lifter to a platform or tearing his quadriceps muscle, causing him to fall pitifully to the floor. Likewise, an errant deadlift can translate into a crippling lower back injury or a hideously deformed biceps tear that rolls up to its origin in the shoulder region. But other than stupidly attempting a maximum single without spotters or dropping the bar on your neck or chest, what orthopedic dangers are presented by this very popular and universally done lift? Dangers that are insidious and long-lasting!

The bench press can be a very productive exercise. Plus, it's a basic, easy-to-learn movement that can be done with a minimum of equipment. If trained in a progressive and productive manner, quite a bit of weight can be used and increases in lean upper body muscle mass can be attained. Unfortunately, if done improperly, it can lead to lumbar spine damage, lesions of the lower back musculature and upper extremity degeneration.

Because competitive powerlifters utilize more weight in this movement than any other group of athletes, it's natural to copy these individuals. It must be realized that the sport of powerlifting requires the development of a number of specific skills, and bench pressing is one of them. Bear in mind, too, that if one is attempting to lift a maximal single repetition, everything is done to make the lift as "easy" as possible. For example, one wants to position his body so that the bar is moved through the shortest range of motion possible; one wants to move the bar in a manner that engages as many of the involved muscle groups as possible; one wants to stabilize the body to remove any unnecessary movement that could detract from the effort that goes into the actual bench press movement.

The competitive lifter has developed a bench pressing style that accomplishes all of the aforementioned, but this does not mean that the bodybuilder, football player or interested trainee should to emulate the powerlifter's style - even they are also interested in lifting as much weight as possible in this exercise.

It has long become acceptable to bench press with the feet planted firmly on the floor and the buttocks and shoulders anchored to the bench top - as is required by powerlifting regulations - and the back held in a high arch. This position makes it difficult, if not impossible, to roll off the bench during the lift, eliminates "body cheat" which can distort one's demonstrated power and lead to possible injury of the spine or upper extremities, shortens the distance that the bar must be moved as it travels from the chest to the lockout position, and establishes an acceptable standard by which meaningful comparisons of performance can be made.

On the other hand, the disadvantages of this position are many: Most athletes involved in powerlifting, bodybuilding, football and other "heavy" athletics do not have the flexibility that is commensurate with their strength and/or muscular mass. Even the exceptional athlete who takes the time to develop extreme ranges of flexibility does so under loads consisting of bodyweight or partial bodyweight. However, when one assumes the arched position on the bench, digs in and sets his body rigidly in place, takes control of the weight, lowers it to the chest and then drives it upward, there is not only increased compressive force on the musculature of the lumbar spine but a certain amount of jamming or sudden compression on the facets - the actual joints of the vertebrae that interface with one another.

The facets are arthroidal joints that have a synovial lining - which when irritated will secrete a surplus of synovial fluid. Extreme arching during the performance of the bench press - especially over a period of time - may lead to chronic irritation of the synovial membranes with inflammation, fluid secretions and discomfort. Moreover, if there is activation of the body's natural defense mechanism, the result will be protective muscle spasms in the area - forcing the lifter to suffer chronic lower back pain, limited ranges of motion and an inability to do any lower back or hip work - all as a result of their bench pressing technique.

If one competes, he attempts to assume this hyperlordotic, or highly arched, position to shorten the stroke of the upper arm movement, and allow the upper extremity to articulate at the shoulder in a way which simulates a decline bench press. This is, for most individuals, the strongest position from which to bench press.

Yet the prolonged execution of this practice definitely leads to injury. And as far as I'm concerned, it's unforgivable to lose training time - especially if it cuts into the more important squat and deadlift work - as a direct result of your benching work. How does one get around this? The solution is simple.

Most individuals have been instructed to keep their feet on the floor during the bench press. In fact, in competition they cannot move their feet as this guarantees forfeiture of the lift. However, to maximize orthopedic safety - especially for young athletes who have active growth plates in the spine - I would like to suggest that the best way to bench press is with a flat back . . . one in which the forward facing curve in the lumber spine is minimized as much as possible. This can best be accomplished by placing the feet on the bench top or footstools eight to 10 inches in height placed adjacent to the bench. These stools or boxes will increase lateral stability if one uses a bench which is less than 30 centimeters in width, which is required for competition. Either position - with the heels and soles on the bench or boxes, will flatten the curve in the lumbar spine, thereby removing compression between the vertebrae and almost eliminating the possibility of facet impingement.

The bench press is a fine upper body developer and heavily relied upon by the strength community - but it should be done as safely as possible. I would encourage all lifters, especially those with a history of lower back discomfort, to bench press with a flat or unarched back in training. The last four weeks prior to a scheduled competition I would assume the competitive posture to adequately practice the skill of bench pressing a relatively heavy weight as one would in a contest. One of the advantages of this strategy is that the bench-pressing muscles will have become quite a bit stronger relative to the results you would have received with conventional form,and it will quickly relate to the competitive lift within the four-week preparation period.

High school and college coaches have no business instructing their football players to bench press with a high arch, nor should bodybuilders adopt this style. Yes, it may initially yield a higher bench press, but at what price? You are much better off utilizing a style where your feet are placed on the bench or on boxes, keeping your back as flat as possible and allowing no body movement other than that in the arms and forearms. In the long run this will prove safer, more productive, and result in a lower incidence of injury.