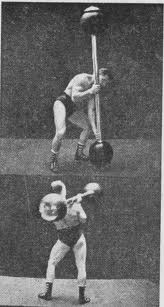 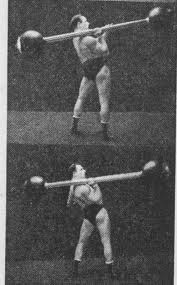 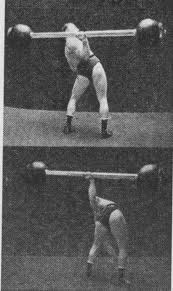 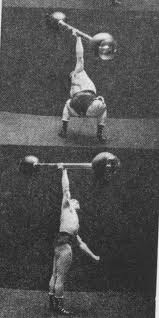 Recently my good friend Fritz Kraus called at the gym and wanted to take some pictures of me. I suggested that it would be a good idea to get these pictures in the Bent Press. The barbell that I am using was presented to me some years ago by G. W. Rolandow, a genuine strongman, and to this day a fine example of a strong man at the age of 64. Incidentally, this bar bell is just like the one that Sandow used in his stage work and if you have seen pictures of Sandow with a huge bar bell you will note that it is exactly the same.

The bar bell weighs 175 lbs. and is empty at that weight. It weighed 299 lbs. when Rolandow presented it to me and he has bent pressed that weight in his prime.

Now, to get down to some facts about the pictures themselves.

Illustration No. 1 shows the classical method employed in rocking a huge bar bell to the shoulder. Please note that the bar itself is being hugged close to the neck, the legs are partly bent at the knees, and the position of the left hand near the sphere to help it rock over so that the weight will rest on the shoulder when it is rocked into position as I begin to squat. The weight is not lifted up. The body squats low so the weight will, with a little push of the left hand, rock onto the shoulder. Also please note how little the bar is actually “lifted.” The right hand is in line in all the pictures save the first and last.

In illustration No. 2 the bar bell has been rocked over the shoulder and I turned around so that my back was facing the camera, for in this position it is much easier to follow the method I personally employ in executing the lift. The left hand is still on the bar bell a few inches in front of the lifting hand and is pushing the bar bell around into position before the real work of lifting commences. Note the position of the feet. The left leg is slightly bent, the right leg straight at the knee.

In illustration No. 4 the left hand has been taken away from the bar, now that the bar bell is in position the elbow has been carried a bit further back and the body is beginning to lean a bit forward but the weight is still resting on the shoulder a bit.

In illustration No. 5 the entire arm has been carried back further so that the upper back muscles will act as a support, the upper body is beginning to go sideways and more forward now and at the same time the right hip is being shifted more to the right, the right leg is still straight at the knee.

In illustration No. 6 the body has been bent more forward, the right hip has been shifted more to the right, and the left arm which you can see between the legs is coming up to be placed on the right thigh to help steady the support.

Illustration No. 7 shows the right arm supporting the right thigh; the body is bending more forward and the right leg is just beginning to bend a little at the knee. Now the arm is pressing hard against the weight and both legs are beginning to bend more at the knees until the arm is straight at the elbow as shown in illustration No. 8. The left shoulder is getting on the inside of the left knee and the legs are bending more at the knees. Still squatting lower, the lifting arm has complete control of the weight, a short pause, and I begin to come to the erect position.The feet are brought together, eyes on the weight overhead and the count – one – two – and the lift is completed.