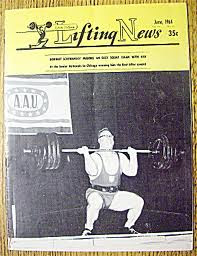 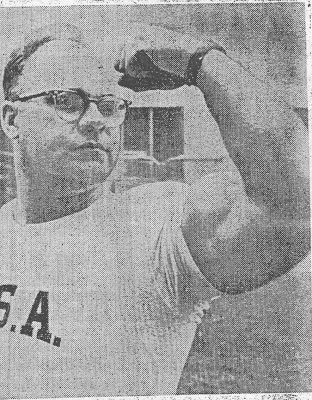 
Time and experience have shown me a few things about strength training, and how this gets modified as a person gets older. Maybe you'd be interested!

Loss of Strength -- It seems to me that I'm still about 70% as strong as at my best in movements like Incline Bench Presses, Arm Exercises, Rowing Motions, etc. - slow and purely muscular, non-compound movements. I never had much muscle then, and I have less now. Tendon strength?

Loss of Explosive Strength -- I peg this at just about 50% of my best. Of course, due to my lack of good technique, I really don't know what I really could have Olympic-lifted then, but today's maxes would probably be even less than 45% of what I should have done. I have some good educated guesses which I'll keep to myself for now. Why is this a smaller percentage than my raw strength percentage? Well, older lifters lose mobility in the joints, and I have accrued various little injuries. I certainly have. Although I feel I'm now in great physical condition, I notice that I get a large number of negative health points (in the various 'how healthy are you' surveys) due to my age.

Training -- I no longer work, go to school, etc., so I have plenty of time to train and rest. So I work out six or seven days each week, unlike the five days I recommend for older people who ask my advice on the subject. My workout almost always begins with 60 minutes on a stationary bicycle at from 65-75% of my maximum pulse (220 minus my age). I end up quite soaked with sweat wearing only a T-shirt. Then I go to the weights on about five days of the week, which includes machines, dumbbells, (and lighter Olympic lifts about once every 10 days). I do only a part of the body in each workout, spreading a wide variety of exercises over the full week. I do a lot of weighted midsection exercises. I feel that my strength endurance today is better than ever. I don't believe that my bicycle ride before my weight workout hinders the weight lifting much, if at all. I call my weight workouts Power Bodybuilding. I use heavy weights. In many ways, I'm at the healthiest in my life right now.

If something hurts, I stop doing it. Days later, I'll only try this again with very light weights, very carefully. I follow my own advice for lifters over 50 years of age -- CONSIDER YOURSELF IN REHAB! With this attitude I'm always positive about my workouts, and always look forward to each and every one of them.


A Letter of Response --

I read your description of your workout. I'm interested because I'm 62 years old and interested more and more in staying in shape, less in lifting heavier weights than I used to be.

Right now I run one day, 25 minutes, then do weights the other. With weights I do strength lifts about four days our of five: Deadlifts, Front Squats, Push Presses. The fifth weights day I do the Olympic lifts.

Could you please send me the specifics about the weights part of your workout? How do you rotate through the various exercises and machines?

I sounds like something I could eventually use, try out, eventually adapt.

I see you use the stationary bike instead of running. Why is that? Do you think the jarring is bad for our old joints? Biking is not weight-bearing, while running is. That's why I do it. But I don't want to cripple myself.

What I do is 'approximately' what I think is best for older lifters. At home I keep a fairly rigid (and healthy) diet. On the road I cheat a bit. And let me say that Clarence Bass's books and articles have taught me a lot, along with my reading a lot of non-lifter studies of what's good for you.

So, here are a few sad facts of getting older.

Your joints aren't as well lubricated naturally and mobility is somewhat (or a lot) reduced. This is why all those Masters lifters who used to do much more weight don't do as much now, and they don't really move the same as their olde days. But many older people do run, and apparently they don't have the knee, ankle and back aches that I, an ex-lifter, do. So running is okay if you don't hurt. As far as my bicycling being non weight-bearing, I do it for aerobic benefits,and I do more than enough weights and machines to satisfy the 'weight bearing' requirements.

I only do Olympic lift-like exercises about once a week for the lousy joint problem mentioned above. Also, I think the older lifter really doesn't have as much energy (to Olympic lift multiple weekly workouts) as the younger athlete. Face it, we're going downhill -- so we should try to make the downhill slope as gradual as possible. I use machines which don't work my complete body as much as the lifts -- but the machines make sure that I keep all the various muscles that I use in LIFE in shape.

I certainly do more core (midsection) exercises than I used to. However, what I do is an all-around bodybuilding workout, and make sure to go heavy at least half of the time.

and I think weighing less (with less bodyfat) is healthy. This is my toughest thing to do. But we all could succeed if once we lose five or 10 pounds, we permanently maintain a lower calorie intake as a rule of life. More fish, more vegetables, more fruits, more beans, nuts and grains and less white breads, less white pastas, and much less sugar. If you're a salt-shaker, shake less! Try spices and peppers for flavoring.

The idea is to be healthy, to feel good, and to try to stay stronger than the average. It can be easily done.

Do not try to be an Olympic weightlifting champion when you are over 50. Over 40 or 50 years old CONSIDER YOURSELF IN REHAB and you'll stay well ahead of the average human!