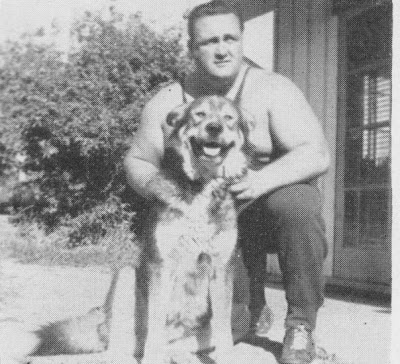 
It is well known among power enthusiasts that Pat Casey was the first man to officially bench press 500 and 600 pounds. These same fans of the sport are probably anxiously awaiting the first 700 pound bench press.

However, this author wonders if today’s fans know who was the first man to bench press 400 and 450 pounds. The man who achieved this feat had the same physical attributes as the great Louis Cyr and since he bench pressed 450 (and later 535) without the use of steroids, it makes him a man who had, even to this day, unparalled strength. This man was Douglas Ivan Hepburn.

Doug was born in Vancouver, British Columbia on September 16, 1927. At birth he had two handicaps: one was a slight club foot condition in his right leg and the other an eye ailment known as an alternating squint. These handicaps did not hinder Hepburn from attaining his goals. They simply made him strive harder to realize them.

While Doug attended school, he participated in baseball, swimming, soccer, bike riding, high bar, balancing, springboard and various forms of gymnastics. Doug became extremely proficient in all of these sports even when he attained a bodyweight of 290.

At the age of 15 he cycles 105 miles in one day, resting only 15 minutes the entire trip. When Doug was 16 and in tenth grade he met a bodybuilder by the name of Mike Poppell, who enticed him into training at the local YMCA where he taught Doug various exercises with weights. After a brief period, Doug was convinced that out of all the sports in which he competed, weightlifting was the best medium to deliver to him his goal of strength.

At first he performed various calisthenics for hours on end which consisted of chinups, handstand presses and dip on the parallel bars. This training was brought to a temporary halt when Doug was 17 and he underwent surgery to remedy his alternating squint. Although the malady was corrected, Doug’s weight dropped from 160 to 145. Undaunted, he resumed training and started once again to make gains.

During this time Doug became a lifeguard at Vancouver’s beautiful Kitsilano Beach. He was allowed to take a set of weights on the beach with him to train with. While working as a lifeguard in the summers of 1948 and 1949 Doug’s weight went from 205 to 225 and he performed some amazing feats of strength. Among them were a 170 pound reverse curl, 370 bench press, and a 310 Olympic press. By 1950 his weight increased to 240 and his strength feats also increased markedly. He could hold out his arms straight in front and allow a 118 pound person to do a handstand on his wrists. He also performed a right arm military press with 155 and a bent press with a 193 pound man. He did 15 strict curls with 145 and a perfect curl with 187½. He had also strict pressed 340.

One of the most memorable events in Doug’s lifting career was his execution of the world’s first 400 pound bench press. This was performed on Sunday, November 19, 1950 and was done in a manner that has never been equaled. One would think that if a performer was going to attempt a milestone lift that he or she would come to the meet, concentrate on nothing but this record, warm up and go all out for that one lift alone. Although this is true for today’s record breakers, it wasn’t true for Doug. During this contest and exhibition, he took a barbell weighing 341 pounds for a strict press. Doug pulled the weight too far forward and it came crashing down. Hepburn, however, refused to let the bar drop to the floor. Maintaining his balance and composure, he power cleaned the bar from the hang and succeeded with a perfect press. As if this were not enough, he took a 10-inch spike and bent it double until the two ends touched. He then proceeded to straighten it out again. Doug finally performed with the utmost strictness the feat everyone came for: the world’s first 400 pound bench press.

On Tuesday, December 19, Doug visited York, Pennsylvania for the first time. Here, he shocked some of weightlifting’s biggest names by strict curling 200, side pressing 200, pressing 365 from the rack and push pressing 385 from the rack. Less than a week later, for the benefit of several famous lifters, Doug push pressed 405, benched 410 and squatted 550 after a workout.

Also while in York, in front of Hoffman, Van Cleef, Grimek, Stanko and Bacon, Doug strict pressed 350, push pressed 400, did a right arm strict press of 155 and lifted the Cyr dumbbell off the floor with his right hand. During this same exhibition, he cleaned a 90 pound dumbbell with only his right index finger. He also hooked the little finger of his right hand under the rim of a 45 pound plate with a 5 pound plate attached and held this total of 50 pounds straight to the side with just that little finger. He later did this feat with 61 pounds.

During the months of March and April of 1951 Doug’s strength kept on increasing with feats of a 410 push press, six reps on the bench press with 380, a 430 bench press and a 410 bench with a 3-second pause after an hour workout, and a strict press with a 157½ barbell with one arm while sitting in a chair. He could also press with two arms 211 pounds while kneeling, bent press 175½ for 10 reps, press a pair of 100 pound dumbbells 21 times, Olympic press 250 for 10 reps cold, curl 71 pound dumbbells for 10 reps with each arm while seated, cold, in street clothes!

Other fears were a crucifix of 85 pounds for 3 seconds, full squats (no wraps or belt) with 460 for 16 reps and 8 reps with 500, clean a thick handled barbell weighing 152 with only the 2nd and 3rd fingers of his right hand.

He could also clean & press with his right hand only an anvil weighing 136 pounds with no help from the left hand. Doug was still very proficient in gymnastics as well. He could press a 205 pound barbell with a full grown man doing a handstand on it.

Doug was quite efficient in handstands himself. In the back of the Hepburn home is a ten foot high basketball rim. The backboard is two inches thick and extends above the rim approximately five feet. While weighing 250 pounds, Doug did a perfect handstand on the edge of the backboard, a very difficult and dangerous feat.

In 1951 Hepburn went on to break another weightlifting milestone. He was to be the first man to bench press 450 pounds. In his hometown of Vancouver, Doug entered a contest sponsored by Joe Weider. The date was November 30, 1951. Attending this show were strength stars such as Reg Park, Clancy Ross, Leo Robert, Marvin Eder and Abe Goldberg.

Prior to attempting his historic bench record Doug performed a feat which no man had ever attempted, let alone succeeded with. Without the aid of a belt or wraps, Doug became the first man to squat 600 pounds. Then on to the bench press.

Bench press champion Marvin Eder tried to push Doug by benching 365. However, Hepburn’s abilities were just too far from any of his contemporaries as he bench pressed 434 for a first attempt and finally the second attempt, the historic 456 which made Doug the first man to achieve a 450 pound bench press.

As if this achievement were not enough, Doug went on to win the World Olympic Weightlifting Championships in 1953 with a 1053 pound total. He defeated the great John Davis and became the first and only Canadian to win the heavyweight Olympic weightlifting championships.

Before his career ended Doug broke the world record in the press no less than eight times and prior to retiring and then decreasing his bodyweight, he posted the following best lifts which are outstanding by the standards of any time period:

The reader will note that Doug’s 260 curl was done in the strictest fashion and is even now the best performance ever made in the strict curl. Another feat made during his prime was the he could bend double a Canadian dime by pressing it against an iron railing with his forefinger and thumb.

Although Doug purposely lost a considerable amount of weight after retirement, he is still training, looks fantastic and has maintained his health and strength throughout the years. On behalf of the entire powerlifting world, this author salutes Douglas Ivan Hepburn, who is without question the modern-day successor to the great Louis Cyr.