The Development of the Clean & Jerk, Part One - David Webster 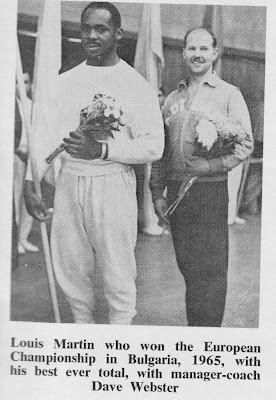 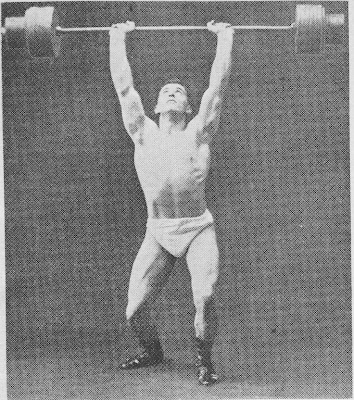 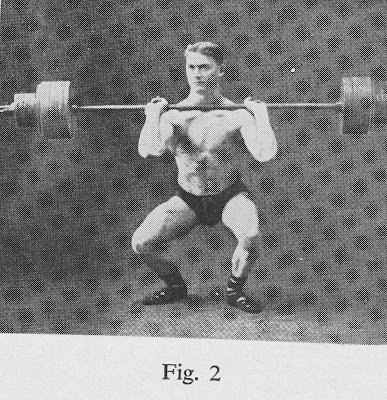 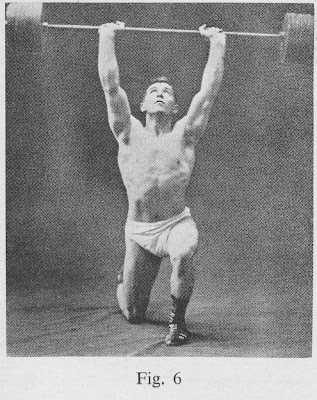 The Development of the Clean & Jerk, Part One
by David Webster


A look at the history of the Clean & Jerk is very heartening for coaches, for it shows without a doubt that their efforts to develop technique have had a good effect. The improvement within the lifespan of such people as George Hackenschmidt, whom I met comparatively recently, is nothing short of fantastic. The greats of the past were wonderful pioneers for our sport and I am a staunch admirer of these giants of the iron game. However, I must confess I have been apt to idolize these champions without truly assessing their performances in comparison with our present leaders in the field. Such a study is very revealing and shows that while many early strong men are still written and spoken about in glowing terms, there are comparatively unknown national and divisional champions of the present day who deserve just as much, if not more, credit.

It is clear that weight for weight our present day experts are much stronger. It is also true to say that modern techniques are infinitely superior; there are undoubtedly changes in technique all the time and little refinements made from year to year that eventually lead to greater lifts as more weight men and their coaches gain an understanding of the principles involved.

Having studied the poundages on various lifts of the giant heavyweights of the last century and the early 1900’s, I am in no doubt that they were exceedingly strong men. Yet, although they practiced continentalling, cleaning and jerking, the poundages recorded on the C & J are poor compared with today’s divisional lifters. Just to quote one example, little Jimmy Moir, a Scottish lightweight, has done over 300 lbs., a more than double bodyweight lift. Is Jimmy stronger than the European beer garden strong men? I doubt it. The big difference is that he is a superlative stylist and his technique would be the envy of many world class lifters. His club mate John McNiven is another double bodyweight lifter, but although at the time of writing he has only been in one international competition, he too has become a good technician and his lifts have progressed accordingly. You can’t lift twice bodyweight, of course, without being very strong, but the point I am making is that through improved technique great poundages are now within the reach of a great many lifters.

To those who many wonder how styles have changed, let’s take a look at the way it was done long ago. Even in the 19th century Britons were very much in favor of the Clean style of bringing the weight to the chest, but in his “Textbook of Weight-lifting” Arthur Saxon indicated that this was certainly not so on the continent. They would shoulder the weight in a series of movements, resting it first on the thighs, waist or belt. Saxon himself did not recommend a split or even a step back, as his brothers did, for the Clean. He pointed out that some lifters stepped forward but he did not think this was necessary either. However, in his other book “Development of Physical Power” in describing the Clean he suggested stepping quickly forward with one foot and back with the other at the same time. He also described the much discussed “second pull” and splitting for the Jerk so there was, even then, some appreciation of technicalities, although strength seemed to be the major factor at all times.

Stanley Pullum, in articles published in THE STRONG MAN magazine during 1923, made some interesting comments about the lift. He mentioned that the Clean was more popular than the continental style in Britain in the early 1900’s when the B.A.W.L.A. gained autonomy from the gymnastic association. In 1913 the continental style was included as many felt that the restrictions of the Clean tended to keep down the standard of double handed lifting in Britain. A technique instruction note in this series advocated that the bar must be pulled to nipple height before any attempt is made to get under it. This, of course, is not possible with present-day poundages.

The importance placed on the Clean & Jerk seems to very considerably. W.A. Pullum in his well known book ‘How to Use a Barbell’ in the chapter on technique of the registered lifts, describes the Clean & Jerk in two lines while his contemporary Thomas Inch says this is the key to all other lifts. Giving credit where credit is due, W.A. Pullum, in a good series of articles in 1940, advocated the Squat Clean.

Although Inch in his ‘Strength’ book gives some good advice on the lift, the photographs of himself demonstrating the lift shows he uses a big lay back in the Clean with less dip than most lifters use in receiving the bar for a Press. In the Jerk one picture shows a half squatting style such as Nemassanyi of Hungary uses, except that Inch’s feet appear almost a yard apart. His arms and head seem in a strong position yet the neighboring photo in his book, showing the split style Jerk, shows his head well back, looking at the bar, very little split, back leg straight, rear foot sideways and flat on the floor. He advised watching the bar throughout the Jerk.

The same flat back foot position as adopted by Inch was advised by Mark Berry (“Physical Training Simplified’. 1930) although Berry did advocate a much lower position. This was mainly achieved by a well bent back leg with the knee turned out – poor by today’s standards but the evolution, allowing greater poundages is clearly shown.

Around this time Scotsman Willie Beattie was British Champion and even today Willie is lifting, as a professional. This man had a reputation as a great stylist so I checked on his Clean & Jerk technique. I found photos and descriptions and an eye witness all too, all confirming each other that, in the Jerk, Willie lifted with hands much wider apart than is used at present. He looked at the bar not just by turning his eyes upwards, but with his head thrown right back. His back foot was placed flat on the floor with toes almost at right angles to the front and knee turned outwards. There was very little bend in the front leg and the front toe was well turned in. The outward rotated leg in particular seemed to give a slight rotation to his body. All this in 1932 combined to produce what was, at that time, described as ‘the ideal position.’ This half-squat, half-split position was advocated in an American book published in 1959 written by college graduates – the suggestion combines the worst aspects of both styles rather than the best.

I was interested to read about the Jerk in Calvert’s ‘Super Strength,’ one of the physical culture classics which can still sometimes be obtained from second-hand dealers. In this book it says that the initial heave will carry the bell to the level of the crown of the head and then it loses its momentum. At that exact instant you must again bend the knees and squat under the bar. Now I wonder if, in those days, they actually did manage to carry the bar to head height with the initial drive. Perhaps with the lighter weights they used then this was possible, but our research shows that this is NEVER DONE nowadays. Just how little the bar rises before the split begins will surprise many authorities who have not done detailed analysis. I believe they may actually have heaved to head height and the belief that this is still done lives on in many places.

Calvert also taught that splitting in the Jerk was ‘all lost motion.’ He said that the correct thing to do was to drop the body straight down by sitting one the heels – the style used by Milo Steinborn, who did 347¾ lbs. In an illustration this position is shown ON THE TOES – an extremely precarious practice.

In the late 1930’s Monte Saldo, the muscle control pioneer, published ‘How to Excel in Games and Athletics’ and advised the THUMBLESS grip for the Clean and also a slight backward lean in the Clean.

Because many people in Britain participated in all-round lifting and because the continental style is an easier way of getting weights to the chest, it took a long time for this mode of shouldering the weight to drop into obscurity and in ‘Health and Strength’ magazine in 1938 George Walsh felt it necessary to write an article stating that the intrusion of the Continental Jerk into the championship had a lot to do with Britons being so poor at the Clean & Jerk. The circle had thus been completed and we were back where we started.

One of Walsh’s theories was that you should not go low in the clean unless you had to. He maintained that you should clean in as high a position as possible with the legs nearly straight unless you were FORCED down into a low position. This was in 198.

The ‘dive’ style of Cleaning was much in vogue from then until around 1948 when the ‘get set’ style took over because of its greater accuracy of grip.

Since the end of World War II there have been two significant diversions of practice in Europe. Russian weightlifting coaches were sent to many countries in the Communist block to initiate training schemes. Poland, Czechoslovakia, and Hungary are the prominent examples, although I heard a whisper that there was at one time some resistance in the latter. In other places such as Switzerland, Germany and Belgium, Al Murray, the British National Coach (initially a Government grant aided post) visited these countries, at their invitation, on many occasions to help train instructors and national teams. Mr. Murray still pays regular visits to certain countries and his influence in lifting technique is still greatly evident in others.

The squat came back to popularity largely in the late 40’s and early 50’s, I believe, because of the performances of America’s Pete George and later Dave Sheppard. These two had eliminated a great many of the faults evident in the earlier exponents of this style. These boys had great platform personalities and brought color to International competitions, and being greatly admired they were often copied. In passing, I would say that certain aspects of their squat snatch were, in my opinion, over-emphasized but this has been dealt with elsewhere.

This gives you some idea of the phases and fashions in the gradual development of the lift and it advisable to keep these points in mind when comparing poundages.