Breath in the Press - Charles A. Smith 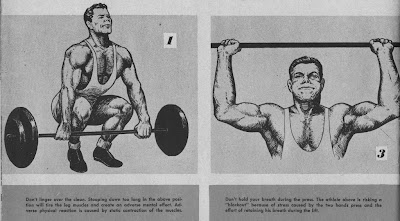 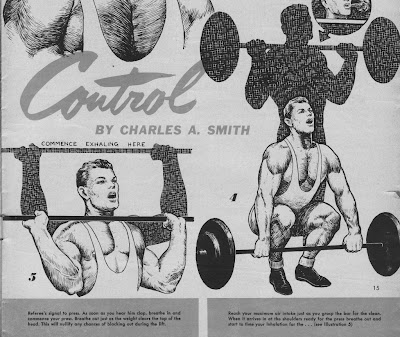 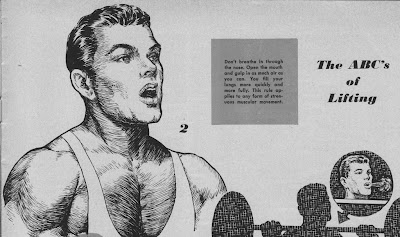 
I have attended two shows recently and was pleasantly surprised at the quality and quantity of talent for our future championship meets. Both these meets were what is known as “development” events, expressly for novices and those who have yet to win or place in a District championships. They had a lot of darn powerful kids lifting and despite the extremely rigid “according to the rules” judging in the press, they all did very well. I might add that in the New York Metropolitan area, we have the best Lifting Officials in the World. You can add twenty pounds to what you press before Met judges and be reasonably sure that your lift will pass everywhere else.

Okay, so there were a lot of strong young fellows and plentiful talent, but not one of them had any idea of Platform Presence and 99% of them showed an astonishing lack of the minutest amount of coaching. I have always maintained that if a job is worth doing, it is worth doing well, yet until they cleaned the weight and pressed it, these youngsters, with a few exceptions, might have been taking their first look and grab at a barbell. Even in training, there is a right way and a wrong way to approach and perform any lifting.

They walked out onto the platform as if about to perform some unpleasant task. They chalked their hands in afterthought, strolling away from the bar to do this. They stood over the bar like they were going to collapse from extreme fatigue, keeping at least six inches away from it. They hardly ever took a look to see if the plates were flush against one another . . . and in many instances they weren’t. They didn’t adjust their hand grip to an even spacing too often, and were guilty of a host of other picayune faults that, while not too important at this stage of their lifting life, WILL be important later on if no steps are taken to correct then NOW.

In Olympic lifting, and I admit I’ve said this innumerable times, each detail is of the utmost importance. You will have noticed the trend these articles have taken. First, you were taught the rules, then platform procedure. You had a schedule of exercises to prepare you for Olympic lifting and then these articles on the press commenced. You have been brought up to a point where you should have some idea of what pressing style suits you best. You know what kind of grip to use . . . how wide a hand spacing your skeletal structure and leverage factors will permit you to take. You also know the foot spacing that suits you best. You know how to clean the weight for the press and what pressing posture you must assume to get the weight quickly and easily overhead. If you have any doubts about any of the above study the information given and diligently practice what is required.

Now comes the all-important problem of breathing for the clean and the press itself. There are two incidents that remain fresh in my memory and amply illustrate the importance of the part breathing plays in ALL lifting, Olympic and otherwise. One was when a certain well-known lifter got down to make a clean for his press. He hung over the bar puffing and panting, emitting all sorts of queer squeaks, whistles, groans and grunts. When he cleaned the bar after some considerable elapse, the weight came poorly into his shoulders and had to be struggled into a press position. Then again he stood whistling and groaning before he made his press. With the weight halfway overhead, he slowed up, dropped the weight and did a fine imitation of the late Leon Errol, the rubber-legged comedian. He had blacked out! NEVER stand too long over the bar when you stoop down to clean it for your press. Take your grip, take a deep breath and whip the bar into pressing position. What happens from there I will discuss in my next example . . . in the meantime, here IS what happens because of lingering over the clean for a press. You waste your energy, both physical and nervous, through hanging over the bar and trying to make up your mind to bring it in to the shoulder. The result is that not only do the leg muscles tire because of being kept in a condition known as “static” contraction, but an adverse psychological effect is created by DOUBT. The more you THINK about cleaning the weight, the more opportunities there are for also thinking about how heavy it is and if you will be successful in lifting it. Find proper form, then practice assuming the position until it becomes second nature and you are repeating your approach to the bar and get-set position identically each and every time. Treat your training the same way. Approach the bar and assume the start position you have found to be ideal for your type identically for every lift, be it a warmup or a maximum attempt. This will “lock you in” to the proper position, as well as build your confidence in achieving the lift, negating the possibility of any negative mental questioning. The time for “cues” is when you are finding and practicing the position, not when you are over the bar prior to actual lifting.

The second example of what happens to a linger lifter comes now. Suppose you are the type of guy who has some trouble with his cleans. If your recovery is hard and long, don’t under any circumstances hold the weight racked across the shoulders more than that two-second clap by the ref. I once saw a darn good lifter come with a hair’s breath of losing his life because of holding the bar too long across the clavicles to take a series of breaths. Bill Aronis had recovered with a 325 squat clean, but it had been a tough one. He stood with the weight racked across the collarbones for a jerk, took several deep breaths and suddenly blacked out, crashing backwards to the platform. By some minor miracle, he remained intact and was soon sitting up and asking what hit him. When you get the weight into the shoulders, take ONE deep breath and DON’T LINGER. As soon as you get the go ahead signal, ram that weight overhead. Holding the weight too long in a rack position cuts off the blood supply to the brain with pressure on sub-clavicle arteries.

One of the major controversies that rage periodically across the face of the physical culture world is the question of breathing . . . how to and when to. Now, you can’t help breathing any more than you can help paying taxes if you’re old enough, or dying when your time comes. Breathing is a reflex action, something we do automatically, and the important part of breathing is not only WHEN you breathe while lifting or indulging in ANY physical activity, but HOW you breathe. Have you ever seen a runner or a boxer breathe through his NOSE . . . the method most “authorities” will tell us to use? Of course you haven’t. ANY man, when under intense physical stress or muscular output, breathes through his MOUTH. Just open your potato trap and gulp in that air. You can breathe in more and you can breathe it in more quickly.

The question of actual breath control during the clean for the press and during the press itself is, as Al Murray, British National Coach remarks, often completely ignored and neglected. It is, as Al says, of vital importance and right from the beginning special attention should be paid to it so that it becomes automatic, an action you perform without any particular thought. Practically every prominent lifter and some lifting nations have their breathing style, during the press in particular, with the Russians breathing out forcibly as the weight arrives in at the shoulders and then, just prior to commencing the press, taking another deep breath and HOLDING IT throughout the lift, again breathing out violently as the barbell arrives at arms’ length.

The Egyptians have an “unconscious” method of breath control while pressing the weight to arms’ length. Their breath is gradually expelled by the simple process of saying a prayer to Allah, thus combining mental stimulation with a definite respirational action. Actually the prayer is nothing more than mental doodling, something to help them concentrate on the job at hand while assuring a condition in which any blackout is unlikely to occur. I don not say that the above is a deliberate action on the part of the Egyptians, but it does tend to regulate breathing and a favorable condition is the result. There IS a definite stress involved in holding the breath. Try it without pressing a weight. Then perform a near-limit press with the breath held and you’ll see what I’m driving at. The theory behind the Russian method of holding the breath during the press proper is that the full lungs provide a firm base from which the pressing muscles can go into action. I do not entirely agree. One can press with the lungs partially filled (I DON’T advise this practice) just as well, and in fact with less strain in the head, than one can with entirely filled-with-air lungs.

The drawback to this style of breathing is that there can be no delay from the “cleaning breath” and the “pressing breath.” It works quite well when the poundage is well within your power but not so good when a limit or above limit is attempted. The result is “oxygen starvation” and dizziness. There are some lifters who take but a single breath for the clean AND press and again the stress is too great for the body to stand when extremely heavy poundages are attempted. I am not trying to create the impression that every lifter blacks out when using the single breath to the press, but in can, and often DOES occur and NO LIFTER IS IMMUNE.

First, DO NOT take a series of short, sharp breaths at any time during the lift. You can get dizzy on air just as you can get dizzy for the want of it. Experiment by taking a considerable number of short breaths and see for yourselves. The best way to breathe is to make it quick and full. As you bend down to take your grip for the clean, start to take your breath and reach the peak of intake s you grasp the bar.

Pull the bar in, stepping back a little in a “token” split or squat if the weight is heavy, breathing out just as the weight starts to settle down across the shoulders. Time your breath and the START of the press just as the referee claps his hand. In other words you must breathe in slowly and listen for the signal to start the press. As soon as you hear the clap, take that deep breath and at the same time commence to press. You will find, after you get used to the method, and of course after that little experimenting, that the deep breath actually helps you get the weight away from the chest. As the weight clears the top of the head, start to breathe out, timing the exhalation to end with the clap of the referee, the signal to LOWER the weight.

You will find, using the above method, that you have all the favorable qualities of the
Russian and Egyptian methods with none of the disadvantages. You will have that fixed base in combination with an advantageous “start away” from the shoulders, as well as an impetus that will carry the bar to the area of the sticking point. The breathing out at this point allows a freer rotation of the scapulae and the weight is negotiated successfully through the area to completion.