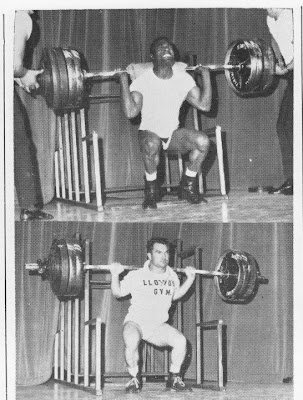 
The full squat is the main exercise here. It gets the entire thigh, front and back, along with the gluteus maximus. With a weight of between 200-250 pounds, Tom does ten minutes of continuous squatting. Sometimes as many as 150 reps are achieved, but the number of reps doesn’t matter; the idea is to keep moving continuously. After a three to four minute rest, it’s time for a second set of ten minutes of squatting.

The next exercise is hack squats, supersetted with leg extensions. This is done for four sets of 20 reps. Tom then goes to eight sets of leg curls, each set done until no more reps can be performed.

For the calves, Platz does ten sets of 15-20 reps of calf raises, each rep done slowly with a full stretch at the bottom and tensing hard at the top. “The important thing is that your mind in into it,” says Tom. “Just bobbing up and down won’t do much.”


Tom’s off-season routine is much more tame, though still a killer. He begins with two sets of full squats, using from 400-475 pounds, for 15-20 reps. He concludes his thigh work with four sets of 6-10 reps of hack squats, then works his calves with the same ten sets of 15-20 reps of calf raises.