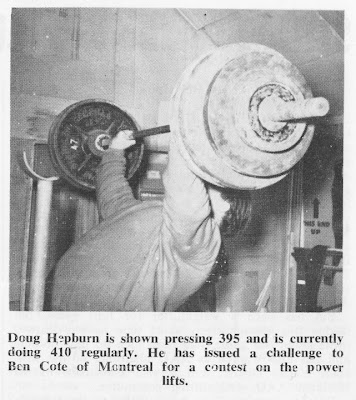 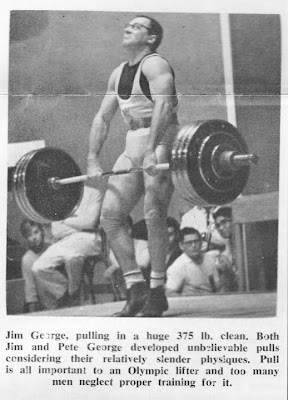 
When viewing the three Olympic lifts in their entirety it is generally concluded that pulling power is the vital essential. This assumption is further strengthened by the fact that it is more difficult to shoulder maximum poundage than to fix this same weight overhead. Fortunately, the muscle groups involved in the elevating of a barbell to the shoulders respond readily to the correct exercise movements. The aforementioned muscles are recognized as the largest and strongest in the human body, so it follows that proportionate increases can be made in the poundages lifted.

Regardless of the degree of pulling power developed one must not overlook the importance of muscle-coordination as applied to cleaning and snatching. An all too common error made by the aspiring weightlifter is to overemphasize the strength factor through the performance of a wide variety of assistance exercise movements at the expense of actual cleaning and snatching. Such a practice invariably culminates in a retardation of the increase in Olympic Total.

Numerous lifters make the mistake of adopting training routines used by the various world champions. “What is good for Schemansky or Vlasov is good enough for me” seems to be the opinion held by a good many as yet unpolished and inexperienced weightlifters.

Such an attitude is similar to a novice pilot attempting to fly a supersonic jet plane.

It is to be remembered that men like Schemansky and Vlasov HAVE ALREADY ACQUIRED an impeccable lifting technique coupled with overall basic body power in the Olympic lifts. This was not accomplished in mere months of training as any informed lifter knows. In short: concentration should be directed upon the assistance exercises (as in the cases of Vlasov and Schemansky) only after a solid foundation of lifting technique and strength has been acquired.

A diamond has to be cut before it is polished. Let this serve as the credo of the dedicated and aspiring weightlifter.

I am of the opinion that the potential of unadulterated pulling power has never been fully explored. I see no reason whatsoever why a 450-lb. clean or more could not be accomplished. This accomplishment would entail a good many years of application to pulling weights from floor level to the shoulders. Such a training routine would be designed so that the actual power clean movement and the other directly connected assistance exercises would form the bulk of the exercise period.

It goes without saying that if a lifter could succeed with the 450-plus power clean that with the application of the cleaning technique (such as is used in international meets) a 500-plus clean would indeed be within the realm of possibility. One could even say (after viewing the tremendous increase in the poundages lifted in the Olympic Three in the last ten years that as far as weightlifting records are concerned the “impossible” is an entirely flexible conception.

The following is a training routine designed to promote maximal pulling power. If, in the future, anyone succeeds with a 450-plus power clean I am certain that the training routine used will be very similar to this one.

Perform five consecutive repetitions pulling the bar from the hang position in front of the body to the shoulders (position the bar on the shoulders just as in pressing or cleaning before lowering).

This movement is to be performed without unlocking the knees or moving the back. In other words, the movement is accomplished with the utilization of the arms and shoulders only.

Increase the weight, performing one single repetition at each increase until a failure is experienced in shouldering. Poundage increases should not exceed ten pounds during this phase of the exercise. It is important that the body remains in the position explained during all the movements, especially the heavier ones.

Perform a series of single repetitions increasing the weight ten to fifteen pounds at each increase until a failure is experienced in shouldering. The back and legs are to be utilized to a greater degree as the weight is increased so that when the near limit is reached the bar is being lowered well below the knees.

Take the poundage failed with and clean from floor level (the bar is not to be resting on the floor prior to cleaning). When shouldering the bar from the floor do not split or dip as you would normally do when cleaning in the Olympic fashion.

Continue on in this manner, increasing the weight ten to fifteen pounds each single rep until a failure in shouldering is encountered. After the bar cannot be shouldered, continue to increase the poundage ten to twenty pounds each succeeding repetition and perform regular high pull movements., gradually to lower and lower heights, consummating with a limit, or near limit, deadlift.

It is recommended to perform a series of sets of Deep Knee Bends after the Power Clean, High Pull, and Deadlift routine is completed. When executing the Deep Knee Bends it is important that the spacing of the feet be identical to that utilized when Cleaning and High Pulling. In this way the muscles associated to Cleaning will receive the ultimate benefit. A good way to ascertain the suitable spacing of the feet is to place them just as when attempting a standing broad jump. In some cases the heels will a tendency to rise off the floor when the low Deep Knee Bend position has been assumed, with the results that balance and leverage will be hindered. To overcome this event, if fit should occur, a shoe or boot with a slightly raised heel can be worn.