The Press Behind Neck - Charles A. Smith 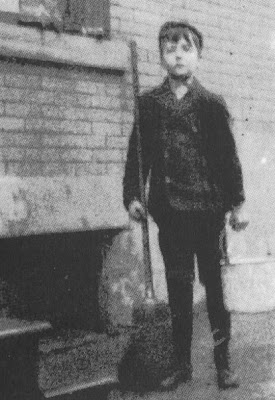 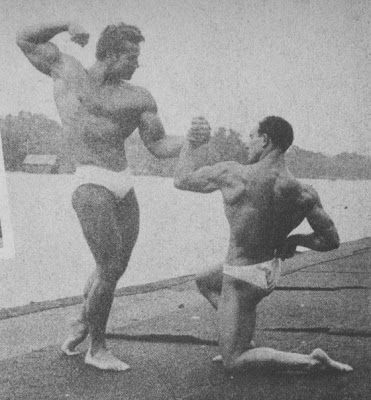 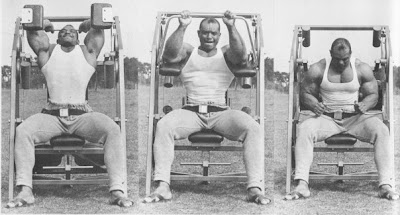 The Press Behind Neck: Its Two Phases as Bodybuilder and Competition Lift.
by Charles A. Smith (1947)


It may come as a surprise to many lifters that the exercise known as the Press Behind Neck has two distinct styles – the one as a bodybuilding exercise and the other as a competitive lift. Many of the “greats” of the bodybuilding world have used the exercise most successfully in weight gaining schedules, and John Carl Grimek owes much of his exceptional tricep and deltoid development to his constant use of the exercise in his early days with Mark H. Berry. Famous bodybuilding advisors such as Joseph Curtis Hise, Peary Rader, Mark Berry, Roger Eels, Joe Weider, etc., etc., are loud in their praises of this wonderful developer. Famous lifters such as Ronald Walker of England have used it to improve their capabilities o the three Olympics, and all agree that few other exercises give such all-round development to the shoulder girdle and such improvement in pressing power. Read this article carefully, try the exercise for three months, and at the end of that time, if you don’t know, your deltoids will have improved along with your pressing power and trapezius development.

First let us take the exercise as a bodybuilding movement. In my opinion the greatest value of the press behind neck lies in the fact that one places the weight on the shoulders as in the DKB. This enables the exerciser to completely relax the arms and shoulders after each repetition. The value of this is even more apparent when you recall how quickly the shoulders tire from the mere effort of holding the weight in front of the shoulders while performing the military press as an exercise. In point of fact, it is this detail which makes the military press so unfavorable as a bodybuilding movement – used that is, in an endeavor to increase the limit poundage on that particular lift. And here is where the subject exercise of this article comes into the picture.

Take a weight that you can EASILY handle for 10 reps. Clean the weight from the floor right over to the back of the neck WITHOUT STOPPING AT THE STERNUM FOR THE CUSTOMARY JERK, stand with the feet not more than 15” apart, and make your initial press. The hands should grip the bar slightly more than shoulder width. Make each press a vigorous one in your effort to get the bar started away from the shoulders. As soon as the weight reaches arms’ length lower it back to the shoulders, bending the knees so that the weight does not jar too much. Relax, then start the second rep. You will find that you obtain the fastest results by using the set system. For those of you who are not acquainted with this method, it consists of performing a given number of reps with a weight, resting for a few minutes, and then repeating the exercise for more reps for up to three, four or more sets of reps. The exerciser should endeavor to work up to 15 reps before increasing the poundage used, and when he does add weight, he should add NO MORE THAN 2½ LBS. Thus the increase in the poundage will be so slight that it will hardly be noticed, and thus a constant advancement in strength is practically assured until this approach becomes stale.

Upon increasing the exercise poundage the lifter should start again at 10 reps and work once more up to 15. Naturally it is not expected that one should do 4 or 5 sets of 15 reps. Rather, it will be found more practical to do 4 or 5 sets of 10 reps, or 3 sets of 12 reps, or 2 or 3 sets of 15. Most lifters will find 2 sets of 15 reps sufficient. Let it not be thought, too, that all the sets of reps are to be done in the same workout. again let me emphasize that the effort must be to increase either the reps and/or sets, or the poundage. One workout, the lifter may do 3 sets of 10 reps, the next workout he might perform 4, or even 5 sets of 10. In his next workout he should make an effort to press his poundage 12 reps for 2 or 3 sets and so on until he can do 2 or 3 sets of 15 with his exercising poundage. Obviously his next advance must be in the weight used, and so the reps must commence again from 10.


Now let us consider the Press Behind Neck as a competition lift. Used in this capacity, it has an entirely different style and method of performance. In my opinion, the greatest exponent of this style was Ronald Walker. Walker claimed that this lift was responsible for a great deal of his shoulder strength and jerking power. I have personally seen Walker press behind neck 275 pounds. He has also held the World record in the snatch with a lift of 297¾, has unofficially snatched 320, one hand cleaned 320 officially, and has officially jerked 380 and cleaned 380. So it can be seen at a glance that the man is slightly stronger than average. Ron claims that he can judge a lifter’s potential and capabilities by what he can do in our subject lift. He also stated that a lifter should be capable of a greater poundage on the press behind neck than in the regular press. Personally, I do not subscribe to this theory. Walker had very wide shoulders and an extremely supple lower back. His press behind neck was always pounds more than his military press in his unofficial lifting, but it did not remotely approach the world record military press record held by Josef Manger. During the years that Walker was building up his military press – his record stands at over 280 lbs. – he used the press behind neck intensively and was the perfect stylist on the lift, as he was on all others, and because of this perfection of style he rarely failed on a lift.

He would grip the bar a little wider than shoulder width, and bending the knees deeply, pull the bar high as if attempting a snatch. As soon as the bar touched his sternum he would jerk it at once overhead, bending the head forward and allowing the weight to drop full onto the shoulders and trapezius. When performing the military press Ron always had the feet apart, but with the press behind neck, the feet were always “heels together.” The reason for this was as follows: Walker said that with the heels held together it was possible to put more power into the press because of the “firmer foundation and centralized power.” This theory is not new or original by any means. The pre-war drop of German lifters contended that the heels together – no pun intended – made for a stronger press, and used this style to a man. The German middleweight, Rudi Ismayr, was in particular an ardent “heels together” presser and on one occasion told me personally that the heels together position enabled one to contract the buttocks and thighs more vigorously and so make a difficult press more certain of success because of the resultant solid foundation for the lift. I have seen Ismayr contract his thighs so hard that they trembled with the effort. Walker, because of his rangy legs, could military press better with the feet apart.

To resume on the style of the press behind neck. After Walker had settled the weight on his shoulders he would lock the knees, drop his head slightly forward, and make a quick, fierce drive. He would put all he had in an effort to press the weight above the back of the head. Walker contends that if one uses a weight reasonably away from one’s limit, this effort is sufficient to send it to arms’ length, and the all the lifter has to do is lean back slightly in case of losing balance. With a much heavier weight, or one closely approaching one’s limit, the lifter must drop back – that is, back bend – as soon as the weight clears the back of the head. A deep back bend is necessary EVERY EFFORT must be made to keep the barbell moving upward and back. On no account must the weight be allowed to travel forward. This forward movement can be prevented by keeping the eyes on the center of the bar. Ron maintains that the two most difficult parts of the lift are dropping into the backbend, and preventing the weight moving in a forward direction. If synchronization of these three movements – centering the bar, upward and backward movements – is perfected, the lifter will have added pounds to his limit. Walker is firm in the opinion that an weight a lifter clears his head with, he should be able to get to arms’ length, providing he prevents FORWARD MOVEMENT.

Once the weight is at arms’ length, the body must be brought to an erect position without any delay. The center of the bar must be watched until the referee has okayed the lift.

Readers must take particular notice of these two styles, the one for competition and the other for bodybuilding. Variations can be introduced in the bodybuilding style by performing the exercise while seated on a stool. Whichever way it is performed, concrete results as regards strength and development are certain.