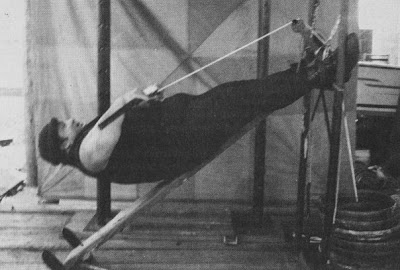 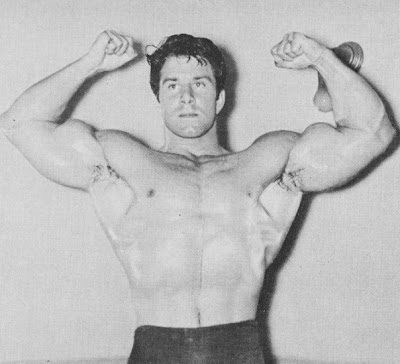 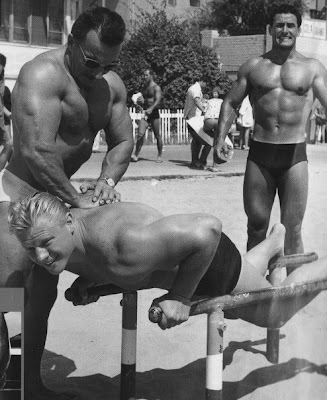 
Although Virgil’s famous line, “Arms and the man I sing,” refers to weaponry rather than physiognomy, it seems an appropriate way to begin an essay on the development of that aspect of the anatomy which captures the imagination of the public and fires the ambition of the weight trainer in a unique and mysterious way. Representing only a tiny proportion of the body’s muscular mass and being rather a weak sister when compared with such groups as the quadriceps, the gluteus maximum, the trapezius and the lumbar columns, the biceps nevertheless is that section of the body to which everyone, weight trainer or uninitiate, refers when using the famous line, “Let’s see your muscle.” As we talked about this article and about the popularity of the biceps we agreed that the only line we’ve heard more people use than “Show me your muscle,” or some variation thereof is the ubiquitous and frustrating, “How much can you lift?” We admitted to one another that in the past we hade each made dozens, perhaps hundreds, of solemn and secret vows to ourselves to strangle to death the next person who looked at us and asked with a smile, “How much can you lift?” An old southern moral axiom, often referred to as Trimble’s First Law (after the originator of the axiom, theologian Thomas Trimble), states that, “If you get it, you need it.” We felt that anyone who inquired of us, “How much can you lift?” certainly NEEDED it and we each planned elaborate and bloody schemes in which those who asked The Question GOT IT in one of a number of gruesome and frightening ways. As you may have suspected, however, after having secretly made one of these vows, the next person who asked The Question of one of us would invariably turn out to be either a non-lifter who could hardly be expected to know any better, or a young man whose open smile and innocent eyes mutely testified to the fact that his desire to know was so intense that it overcame his normal capacity for thought. Confronted again and again with these kinds of folks, our steel-like reserve to kill without mercy melted away into a struggle to answer the unanswerable, thus demonstrating, in a bassackwards sort of way, Trimble’s wisdom, for had he said, “If you need it, you get it,” he would, of course, have been wrong.

But back to the biceps – the two headed King of the Lumps. Perhaps one of the reasons for the unusual popularity of this part of the upper arm is that, for the average man, the biceps is considerably more difficult to increase in size than its larger and usually less often used neighbor, the triceps. Because of the biceps’ tendency toward a relatively low D.Q. (Development Quotient) and because of its previously mentioned status as muscular royalty, an amazing and seemingly endless variety of exercises and special apparati have been invented and employed in an effort to stretch the tape 1/8 of an inch more. Probably the most inventive trainers are those who have serious trouble with this particular body part. Such names as Vince Gironda and Zabo Koszewski come immediately to mind. We’ve been around the iron game for quite a few years now and neither one can recall ever having heard a bodybuilder or lifter say, “Man, what wouldn’t I give to have arms like Gironda,” or, “My God, look at those hams on Zabo!” Exclamations of awe and amazement concerning Zabo’s nonabdominable abdominals? Yes. Volumes of praise about Gironda’s proportions and muscularity? Naturally. But words of wonder and delight about their biceps? Afraid not. But does that mean that they just don’t know how to properly work the old brachia? Not a bit of it, for as we learn at school, necessity is the mother of deceased, beak-nosed, bandleader-guitar virtuoso/classical composers with the initials FZ, and it’s without question a NECESSITY for Zabo and Vince to be creative in their training in order to effect and maintain arm size. It also goes without saying that as far as arm training is concerned (and any other training as well), Zabo and Vince are two smart mothers.

We would extend the above argument beyond logic if we were to say that, all things being equal, the smaller a man’s arms were the more he must therefore know about building big arms. The two of us would be the last to so grossly overextend the argument, for our combined 48” upper arms would categorize us as being several levels below imbecility in the matter of training I.Q. We also, though, being honest, would not presume to suggest that, just because our arms each taped right around the two foot mark, we therefore knew more about the architecture of big arms than anyone else around. It would be less frank to deny that weighing a combined 700 pounds gives us a certain EDGE in the construction of a two foot arm. “Two foot arm?” Sounds deformed, somehow. In any case, the fact remains that we do have some general suggestions about biceps development and we hope that those of you with an itch for bulging biceps are able to use our suggestions to scratch with.

We have divided the following exercises into two general categories: (1) Pulling and (2) Curling, and we’ll begin with a list of some of the exercises of a pulling nature. Because of space limitations we will not describe the various exercises.


Several general rules listed and discussed below will hopefully allow you to make the best use of the above exercises.

1.) Paul Anderson recommends that all arm work, whether pulling or curling, should be preceded by at least one set of upside down pulls or curls (see accompanying photo). He argues that this is the fastest and most thorough way to congest the target area with blood.

2.) We both agree with Bob Hoffman and John Grimek that overpumping is counterproductive for muscular development. The best rule of thumb is a simple one, yet quite profound – continue an exercise until target area or muscle is thoroughly congested with blood or “pumped.” The advanced trainer is rather like a well-hooked heroin addict in that it will take increasingly heavy “doses” to get the job done. Avoid at all costs the deadly O.D.

3.) In curling movements with a supinated grip, always be sure to begin the curl with a wrist curl so that the hand precedes the wrist as the bar goes up. This little trick not only insures a more complete development of size and strength in the forearm flexors; it provides as well for a more complete workout of the lower part of the biceps, an often neglected, though important, part of the arm.

4.) In pulling movements, be quite careful to fully extend your arms on each repetition because of the effect on the biceps insertion. Pulling movements are vital in this respect, as a glance at any advanced weightlifter or gymnast will quickly confirm.

5.) Avoid staleness by changing to new biceps exercises whenever progress ceases or your arms begin to ache deep in the elbow joint, forearms or wrists. Before you change your exercises, however, check your diet and your sleep schedule, because your progress could very well be retarded by a problem in either, or both, of these areas.

6.) In your curling movements, both regular (supinated) and reverse (pronated) grip, use an E-Z curl type bar at least part of the time as it imparts a slightly different development pattern. Furthermore, if your elbows, forearms or wrists are giving you trouble, try the E-Z curl bar. It often provides dramatic relief from pains and aches of the lower arm.

7.) In both pulling and curling movements avoid abrupt jerks and yanks on the barbell and/or dumbell, because of the danger of tearing all or part of the biceps insertion or even the body of the biceps muscle. If you have ever seen someone to whom this tragic accident has occurred, with their biceps rolled up to the armpit like a windowshade, you would know whereof we speak and follow our advice.

9.) Use maximum weights for at least some of your exercises. Vary your program by occasionally working “beyond fatigue” by having your training partner assist you for several repetitions after you have worked to the point of failure. If you train alone, try adding assisted reps to your dumbell exercises by helping with the non-lifting arm.

10.) Vary your repetitions anywhere from 1 to 30, depending on your mood, condition, and goal. The pump, remember, is the crucial factor.

What a standard these men have set; what an inspiration they provide. Remember as you train that they all began with far less than they finished with and that they made their gains by performing the very same exercises we have listed above. They came by their Brobdingnagian biceps not by magic, or, except in rare cases, by being freakishly well-endowed by nature. Most, in fact, began with the arms of an average man and through sweat and sacrifice sculpted for themselves a set of arms that has immortalized them. If you like, you can follow.

The choice is yours.