Style and Training for the T.H. Press 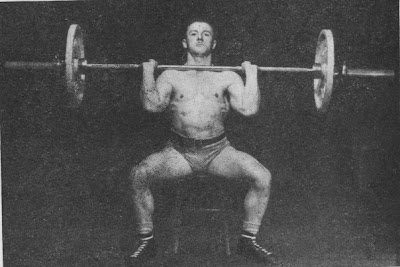 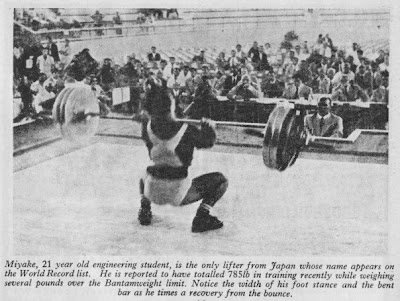 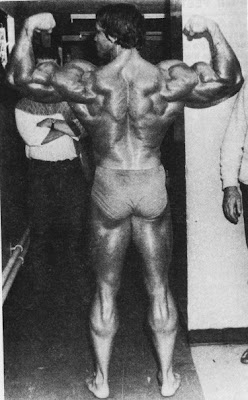 Style and Training for the Two Hands Press

In my last article I described the pull-in for the Press and the position to adopt at the commencement. I suggested that the position should automatically be the result of the way the body is set, and this should be accomplished whilst the Clean is in progress and not after the bar has reached the shoulders.

Another major point to discuss at this stage is breathing. There are many ways of combining the breathing with the action and it is doubtless of great importance to ensure this is done correctly.

Some experts maintain that the whole lift, from floor to overhead, should be done on one breath. They maintain that expelling the initial breath at the shoulders causes the muscles of the chest and back to relax. This is possible, because these muscles act in co-ordination with breathing, especially deep breathing.

Such action can, of course, result in a loss of power at a point when maximum effort (driving the bar from the shoulders) is an absolute necessity.

These people say that a deep breath should be taken either before or during the clean, and then the breath should be held (to preserve the high chest and tense muscles) until the lift is almost concluded. The breath is exhaled as the arms lock, or when it is actually enforced.

One point against this system is the time the breath must be held. This varies slightly according to the speed of performance and, of course, the referee’s signal at the shoulders, but no matter how quickly the lift is concluded, there is a fairly lengthy period, especially under the circumstances, when the breath must be held.

It must be remembered that if the breath is exhaled too soon the lift will be lost, and it, on the other hand, the breath is held too long, some discomfort, even blackouts, can be experienced.

Another method is to do the lift on two distinct breaths. Breathe in – clean the weight – breathe out – in again – Press – then out.

This ensures a sufficiency of oxygen and can easily be made into a habitual part of the action, but apart from the aforementioned relaxing of muscles it is not a method to recommend for modern performances.

As I said previously, it is important that the commencing position be adopted immediately and the lifter must be ready for the Press as soon as the ref gives his signal. The breathing, also, must be controlled to fit in with this.

There is a way (it can be adopted to any style, but it fits in perfectly with the one we are recommending here) and although it means taking two breaths, there is not quite the same detriment to the action.

A shallow breath is taken before the clean and this is exhaled as the weight comes into the shoulders and the curve is induced. This actually helps the lifter to get the right position.

As soon as the body is set to commence, a deep breath is taken, and this occupies only the time the ref is forced to wait before giving the signal so that the lifter is ready immediately. As a matter of fact, constant practice can enable the lifter to become so proficient at timing the action that there is no conscious pause whatsoever.

You will recall that at this point the body should be “curved” from heels to shoulders and the knees slightly relaxed.

As soon as the signal is given the press should begin, not, as in an exercise Press, by shoulder action alone, but as a combined body movement, with a tensing of the knees, thighs and buttocks and a simultaneous drive from the shoulders by the whole power possible from the upper body.

The deltoids do, of course, play a major part, but if too much reliance is placed on the power available from this source, not many world records will be broken!

This drive must be sufficient to carry the bar well beyond normal sticking point, so that the triceps can conclude all the action. Failure to do this, for any reason, will result in the bar stopping, or, at least, slowing up.

The latter result will, no doubt, cause a tendency to back-bend and, with top poundages, even the strong position described here may not prevent this, or permit the lift to be concluded correctly.

It will be realized that, if high poundages are the lifter’s ambition, this initial drive is the important thing, and, combined with power, is the only way for really great performances.

At the conclusion of the lift the body should be maintained in the same position and not brought erect. There is no physical reason for this, but it is possible that the referee, seeing that altered body-position, may rule the lift out on an assumption there has been back-bend contrary to the rules. If the head is set back (there is no real necessity for this) the position of that should be held also.

Breathe out as the arms begin to lock, but do not relax the power behind the movement whilst doing so.

One further point. Do not confuse the relaxing and tensing of the knees with bending or jerking. There can be no perceptible movement whatsoever, none is allowed by rule, and none is necessary in the action.

If it is possible, I hope to give some schedules and advice on progressive routines at the end of this series, so I will content myself by saying I sincerely believe that when a style has been developed and accepted, the lifter requires plenty of HEAVY SINGLE PRESSES for good improvement.

He also needs some kind of ASSISTANCE EXERCISES to specialize on developing the muscles used in pressing. These also provide a means of lending a change to the routine and can be done by themselves, or in conjunction with the Press proper.

First, there is the SEATED PRESS. This should be done on a form of stool or backless bench that is of a height to set the thighs parallel when the feet are flat on the floor. It should be done in strict style, because the object is development of the Deltoids and Triceps, which can be accomplished by severely limiting or completely removing the possibility of back- and knee-bend when in the proper seated position. An even stricter style can be enforced by doing it seated on the floor, but less weight can be handled and there is little to be gained, aside from occasional variety, by so doing.

Another good movement is the DUMBELL PRESS. Without doubt, pressing the dumbells simultaneously is best, but even alternate pressing has good effect if most of the reps are done in strict style. When proficient with the bells, a good movement is to do as many reps as possible both together, and then carry on with some alternate singles, thus really working to the limit.

For concentrated work on the Deltoids alone, such lifts as HOLD-OUTS, LATERAL RAISES and COMBINATION MOVEMENTS involving such actions cannot be beaten.

The advanced man, if he trains four times a week, can do two of these type movements on two training sessions and have the remaining sessions for the orthodox movements.

I myself have done months on the various power movements without ever doing a Press, reverting back to normal training a few weeks before a lifting contest. The value of such procedure can only be estimated for each individual by the experience gained over lengthy periods, but such experiments must be made if the lifter is to find the routine to suit he own individuality.