Powerlifters and the O-Lifts - Frank Bates 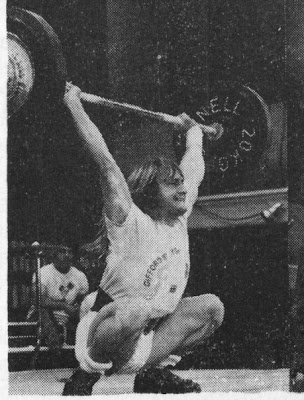 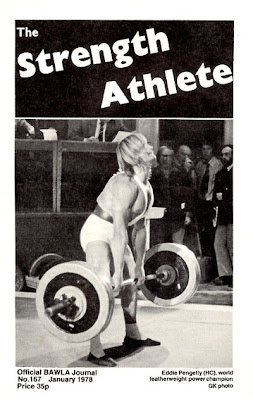 Powerlifters and the O-Lifts

I am a great believer that a good powerlifter can become a good Olympic lifter if he trains correctly. By this I mean that he would have to prepare himself to do at least a few thousand real light presses, for form, with a good training partner or coach to watch him periodically and insure him of his progress.

This would be the first great sacrifice the powerlifter would have to make, but I am sure that it would be well worth the effort that the lifter would choose to make.

The next O-lift, the two hand snatch, is a beautiful lift when done correctly. To train for this lift, again it means a few thousand repetitions and 90 percent of them should be hangs below the knees to get to understand what the SECOND PULL is. Once this is incorporated into the pull the lifter will find to his amazement that his snatching will improve to a great extent.

The powerlifter will also be pleased to find that the same second pull is applied to the clean for the last of the Olympic lifts, the clean and jerk. Again the correct method of training for this lift is to do very light weights even if it’s only the empty 45-pound bar to develop the second pull by pulling from below the knees and going into the squat, as this would be more of an advantage than trying for the split style of cleaning.

I try to impress upon the reader that the bar alone would be sufficient, but I certainly would not like to see a person use more than 115 pounds until he has developed smooth and solid form with the use of the second pull.

I would like to see a lifter start the first one from the floor, then four hangs. This, I believe would be the best to get coordination.

When the lifter feels that he is now getting the correct movement, and his coach or an experienced trainer agrees, then and only then would I permit the lifter to use more weight. Most of the top officials in this country will remember that Tommy Kono, when he missed a real heavy weight in the snatch or the clean for the jerk, would do the same weight from the hang. The same weight that he missed from the floor. This only proves one thing – that Tommy did a few hundred thousand hangs to get the correct movement for all of his three lifts.

There is one thing that that the powerlifter must remember if he decided to try the Olympic lifts – he should also do his squats, front and rear squats, correctly. He should maintain good form by keeping his upper torso erect, for now it will be very important for him to do front squats with heavy weights correctly.

It stands to reason that powerlifters in this country are making new records all the time. It’s amazing how much they’ve improved in the past six or seven years.

I hope to see a day when a young or old person can pick up a book that can direct him by giving him the basic information right up to the day when this person would be able to develop a positive training system for himself, one suited to him alone, and not be misled by anyone who thinks that because you are strong you don’t have to be in some ways guided by a proper system, as success at lifting does not come easy.

Like I’ve stated in the early part of this article, after a few thousand movements you realize the coordination of all the movements, and with speed and power a person has the confidence of giving a good account of himself. This is mainly because he has eliminated his faults.

It would be wonderful if all who are interested in Olympic lifting could spend two weeks in the Olympic Development Camp that Morris Weissbrot has supervised for many years. But this is impossible, as only the top teenage champions are invited to the camp. A large-scale development camp such as this would be wonderful to have in this country. I would not be surprised to one day see colleges in this country start offering courses in weightlifting, powerlifting, and bodybuilding.

Today, for a powerlifter to successfully develop technique and reach his strength goals, he must train as hard and spend as much time and energy training as an Olympic lifter.