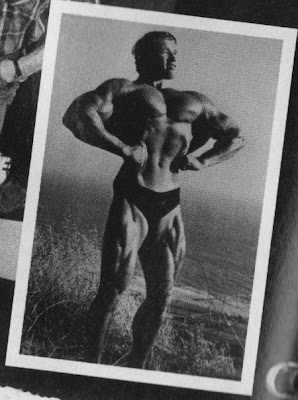 Powerful Arms For You
by David Willoughby

Examples of fine arm development are to be found in greatest number in those sports or forms of exercise that make the heaviest demands on the strength of the arms. For this reason it becomes a simple matter of reverse procedure to ascertain the most effective forms of exercise for the arms. All we need to do is ask: “Which form of training is practiced by the men who, as a class, possess the largest and strongest arms?” The answer, to follow, may be confirmed by anyone who will search the ranks of sport for the fine physical specimens. The largest, strongest and best-shaped arms are found first among weight lifters; then among wrestlers, hand-to-hand balancers, tumblers and gymnasts who specialize on the Roman rings. Occasional instances of exceptional arm development will, of course, appear in almost every line of sport and occupation; sometimes, indeed, in the most unlooked for places. These examples, however, of what in all probability is inherited physique may be disregarded in our search for efficacious methods of training. Their necessary appearance, due to the laws of chance, in no way disproves the fact that the average man – which in the connection means practically every man – can become improved physically only be applying himself systematically in this endeavor.

We have named weight lifting as the sport most conductive to fine arm development. It is true that some athletes have attained exceptional size and strength in the arms chiefly, if not wholly, by means other than weight lifting. They are, however, few and far between. In naming the sport of weight lifting, it should be specifically stated that among the followers of this sport, the most commendable results are obtained by those who use their weights first as a means of improving their bodily development, and only secondarily to see how much they can lift in the competition events.

Concerning the wrestlers whom we have in mind as examples of arm development, all without exception practice, or did practice, weight lifting exercises also. Therefore, just how much of their development may be attributed to wrestling and how much to lifting, it is impossible to say. There are, no doubt, many wrestlers, both amateur and professional, who have never lifted a barbell or dumbell in their lives and yet possess fine bodily development in all respects, including the arms. But in such instances one should bear in mind the many similarities of wrestling and weight lifting. We can only emphasize the fact that wrestlers possessing exceptional arm development whom we have observed, and the wrestlers world-renowned for physical development as well as for wrestling ability all trained with weights, some of them only occasionally, others as often as they could find the opportunity.

Hand balancing, hand-to-hand balancing (where one man lifts another), tumbling, and feats on the Roman rings all owe their chief value as physical exercises that have the greatest effects on muscular development may in most instances be directly compared with certain of the standard exercises with barbells. Weight lifting is, indeed, often used as a basic exercise by other athletes. /some of the finest professional hand balancers and hand-to-hand balancers owe their underlying strength and physical shapeliness to weightlifting exercises. And there are first-class tumblers, also, who use the valuable developing exercises with weights as an assistance in their chosen sport. The fellows who specialize in Roman ring work, or indeed, those who aspire to championship honors in any form of gymnastics (where a properly developed pair of legs is a disadvantage), naturally avoid weight lifting. There are exceptions even here, however, in the cases of those who practice only such exercises with the weights as are confined in their effects to the arms and upper body.

Gymnastic apparatus exercises, as on the Roman rings, parallel bars, horizontal bar, and in rope climbing, despite their strong effect on the development of the body from the waist upwards, cannot compare in vale with either wrestling, rowing, tumbling, hand-to-hand balancing, or weight lifting. Each of the latter sports develops the whole body; gymnastic work, only the upper half of the body. For any young fellow who has the use of both legs to specialize in a sport that neglects them, and so allows the upper half of the body to be developed to a disproportionate degree, is nothing short of a crime. To those who are uninformed as to the relationship between health and the kind of physical training followed, this last statement may require an explanation. Since this treatise on arm development, however, is not the logical place in which to deal with the effects of exercise on other parts of the body, we shall content ourselves with pointing out that exercise of the waist muscles has a distinct bearing on the functioning of the digestive organs, while exercise of the legs is associated, in a somewhat different manner, with the functioning of the circulatory and respiratory apparatus (the heart, lungs, and blood stream). There is some reason to believe, moreover, that proper size and development of the legs may become impossible if their cultivation is neglected too long while the arms and upper body are subjected to intensive training, such as that given by gymnastic specialization. Even if gymnastic work were the best method of developing the arms therefore, we still should not recommend it as an exclusive form of training. But since it is not without a superior, and since the men who possess the largest, strongest, and best-shaped forearms and upper arms all obtained their development from weight lifting exercises, or feats, or exercise similar thereto, our task as advocates of physical training is made easy.