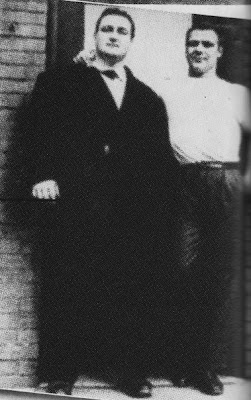 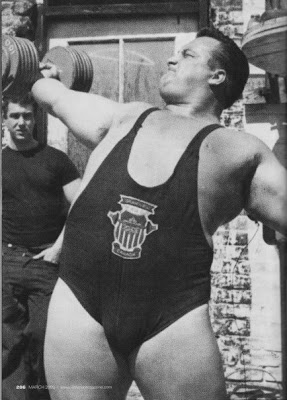 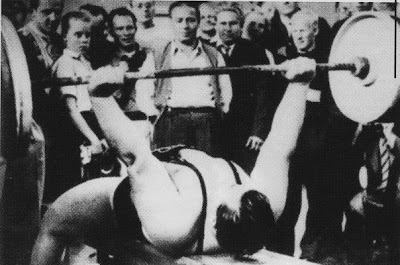 The year 1953 was a golden time to be young and in America. On the radio the smooth voices of Dean Martin, Nat King Cole and a young Tony Bennett could be heard crooning. Movie theatergoers were being treated to the premiere of Peter Pan and to the amazing technology of the 3-D film. Book lovers were cracking open the first James Bond novel and Ray Bradbury published the sci-fi classic Fahrenheit 451. In the world of periodicals, Iron Man was featuring some of the greatest kings Muscle Beach had ever seen – guys like Bill Pearl, George Eiferman and Clarence Ross. If you were into the beach bunnies hanging onto the arms of those musclemen, you’ll be happy to know that 1953 was the year Playboy magazine was first published.

In the summer of 1953, while training to become the first weightlifting world champion from Canada, Doug Hepburn cemented his name in the iron sports history books by being the first person ever to officially bench press 500 pounds. Hepburn pressed his ponderous poundage at the Western Sports Center in Vancouver, B.C., in front of a host of witnesses, including members of the B.C. Weightlifting Association. What should really grab your attention is that the odds are Hepburn accomplished that feat without ever taking a single dose of steroids.

How can I prove that? Well, I can’t completely, but here’s history as I see it. In the 1930s, they were used to treat the chronologically weak and elderly in some hospitals. In the late 1930s and early 1940s the Nazis experimented with them in underground labs in an attempt to create a stronger soldier and a superior Aryan athlete. Since many of the Nazi’s experiments were undoubtedly performed at concentration camps in Eastern Europe, Russian scientists quickly learned of them. By the late 1940s they were putting all their superlifters on large doses of the newly discovered drugs.

Communications between the Soviets and the West was very limited, and the secret of steroids was closely guarded. Doug Hepburn didn’t compete or travel overseas until he won the world weightlifting championship in Sweden in the fall of 1953. So it’s 90 percent certain that he hadn’t had any interaction with the German or Russian strength scientists.

Dr. John Ziegler, bringer of Dianabol, didn’t start working with York Barbell until the early 1950s. He teamed up with a forty-something year old John Grimek who didn’t try steroids until 1954. CIBA, a Swiss-German-American pharmaceuticals company, first supplied Grimek with steroids. CIBA went on to send Grimek cases of the drugs to give to York Barbell athletes. It also teamed up with Ziegler to invent Dbol in its efforts to beat out the Russians at the Olympics. But the CIBA-Ziegler-Grimek connection didn’t take place until the mid-1950s, and Doug Hepburn’s famous meeting with Grimek took place in 1951, three years before the anabolic wave crashed the gym scene.

It’s ever so slightly possible that Grimek had begun steroid use a few years earlier and that he shared his secret with Doug, but I doubt it. York Barbell housed the American Olympic lifting team and, as a Canadian, Doug was a serious threat to their chances of winning another medal. It’s very unlikely that Grimek would have given a Canadian lifting champion the secret super-vitamin that could add so much to his lifting capabilities.

If you want to be a cynic and think that Doug Hepburn had access to steroids, you’d have to assume that he got connected either when he lifted in New York or when he visited York Barbell – both visits were in 1951. He could have built his bench up to 420 lbs. completely drug free, going from 420 to 500-plus using the steroids of the day. From ’51 to ’53 though, the only steroids available were crappy derivatives of testosterone and cortico-steroids, which definitely don’t make a person any stronger. The anabolic steroids of the early ‘50s were toxic garbage compared with today’s versions, and they came with lots of side effects. Until the late ‘50s and beyond, nobody had any Dbol, Anadrol 50, Fina, test enanthate, Deca and so on.

I believe that Hepburn figured out how to build his bench up to 500 lbs. using nutrition, rest and intense training – without drugs. It’s a safe assumption that from the late ‘50s on pretty much every bodybuilding, weightlifting and powerlifting champion was jacked to the gills.

Am I anti-steroids? Personally, no. If you’re at least 21 years of age, I believe it’s your prerogative to use steroids providing you’re not competing in a drug-tested sporting event. I also think, however, that tens of thousands of lifters have never used steroids and don’t plan to. I’m addressing the steroid-free masses about Doug Hepburn-inspired training and recovery for building a lot of brawn and bulk and a huge bench press.

Most people are hard core about their strength and musclebuilding when they’re in the gym, when if fact their main focus should be on their diet and recovery plan. I’ve seen countless teen and collegiate lifters push and pull in the weight room until they’re red in the face and totally exhausted, then go out to eat fast food, drink beer and get little sleep that night. If they do eat intelligently, they don’t eat nearly enough.

At 18, after his high school years – he wasn’t much of a student – Doug was hired to work on a poultry farm. His compensation was $3.00 a day and all the eggs he could eat. By that time he was already heavily into lifting weights and he weighed 200-plus solid pounds at 5’8 ½”. Doug also had a second job, but that position paid only an additional $1.50. So with $4.50 in his pocket every day and al the eggs he could eat, he set up the following mass building diet plan: For breakfast, lunch and dinner he ate 18 eggs and a bunch of bananas, and he drank a half gallon of whole milk. That’s 54 eggs and a gallon and a half of whole milk every 24 hours.

If you add up the nutritional values, you’ll find that every day Doug Hepburn took in about 540 grams of protein at a bodyweight of 200 to 220 lbs., or about 2.25 to 2.7 grams of protein per pound of bodyweight per day. Bananas have a bit of protein in them, but not enough to deal with here. The downside of Hepburn’s diet was that he was also taking in a lot of fat, cholesterol and probably more simple carbs than he needed – he admitted to being addicted to chocolate cake. Hepburn later used protein shakes, but the quality of protein powder and protein shakes was nowhere near as good and digestible as what’s available nowadays.

The other aspect of recovery is sleep. Doug Hepburn wasn’t the world’s best worker, and he spent most of his life at the bottom of the Western world’s economic food chain. On the positive side, he had plenty of time away from working and took advantage of that, sleeping 10 hours a day every day. You may not be able to set 10 hours aside every day for sleep, but you should do everything you can to get at least 8 hours in, even if you have to steal a nap in the middle of the afternoon when no one’s watching.

In my next article I’ll get into the details of Doug’s training programs.