The archer movement with cables is an excellent exercise for building up the triceps muscles. From the position shown straighten the arm from the elbow only to shoulder level. Be sure to thoroughly straighten the arm, slowly and smoothly. Practice with both arms.

The alternate press with dumbbells is another good arm and shoulder exercise. Bring both dumbbells to the shoulders and alternately press them overhead as high as possible. Practice with kettlebells if possible, as they give a greater extension and longer pull to the muscles, and this is what brings results. 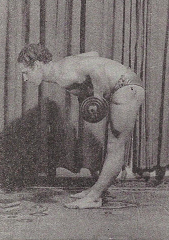 Hold the dumbbells as shown, with the upper arm in line with the back, and slowly straighten the bent arms. Use a pair of light dumbbells and make sure that only the lower part of the arms is straightened out. Keep the elbows in at the sides without moving them while performing the exercise.

Take a dumbbell to full stretch overhead, the arm should be straight and vertical and the upper arm should accordingly be against the side of your head. Without moving the upper arm and body, bend the elbow fully and bring the arm down to the position shown resting dumbbell against shoulder, behind the neck. Then straighten the arm back to its original position overhead. A light dumbbell should be used in this exercise. 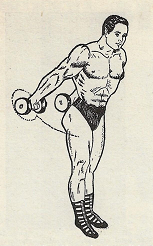 With arms at the sides, raise dumbbells backwards as shown, following dotted lines. When you reach the limit of the backward raise as shown, raise the knuckles upwards bending towards the forearm. It is very important that the body does not move forward from the waist when performing this exercise. Use the strength of the triceps only to perform this movement. 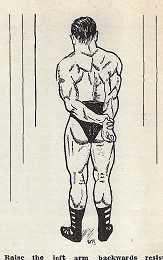 Raise the left arm backwards resisting with the right as shown. See that you move the arm backward from the shoulder only and keep the body erect. Practice with both arms. 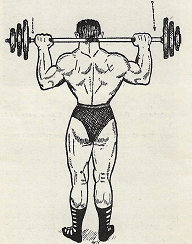 Stretching cables across the back or in front of the chest is an excellent exercise for the triceps muscles. Many good arm exercises can be done with a chest expander. It is one of the finest pieces of apparatus in developing the triceps.

Take the above position, grasping the barbell as shown by the dotted lines, and straighten the arms. Don't swing the barbell but use the strength of the triceps to bring it to arms length overhead. Other good exercises that can be done from this position are the prone press, shoulder press and belly toss. All are good triceps exercises, and plenty of weight can be used. 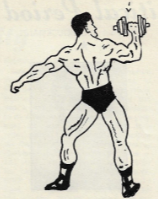 The side press is another good exercise. In this exercise a heavier dumbbell could be used but be sure to do the exercise correctly. Bring a dumbbell to the shoulder and take the position as shown, feet no more than 15 inches apart, bend slowly to the left side and straighten the right arm overhead. When this is done bring the body back to its original position and then lower the dumbbell to the shoulder and repeat.
Enjoy Your Lifting!

Wonderful choice of subject matter. Kudos to the TTSDB content editor. More of these timeless articles would be appreciated. And pics of Ed Theriault and a youthful Joe Weider to boot! Bravo!

Joe W was just a kid there and already publishing a mag in Montreal.
The cable-expander mention, I like that.