This is a sunny afternoon. Many people are enjoying the day with their families by attending a local festivity. Today there will be an extra treat. Vic and his brother, Ernie Frantz, are present with their strength and acrobatic team. Quickly a handful of people turns into a large crows as they are interested in these five men warming up for the presentation.
The show begins with the men forming a human hanging pyramid. A very difficult feat to which the growing larger crowd roars with appreciation. In the next hour these people will witness stunts and exhibitions they may never see again. Many can be overheard remarking on how incredible it is, and truly it is as these men are super athletes. During the late 50's and early 60's you may have been fortunate enough to have seen this act.
One of the men from this team is the feature of this article. His name is Ernie Frantz and from this early beginning some 26 years ago he has had a deep belief that physical fitness is important to all. https://www.amazon.ca/Ernie-Frantzs-Commandments-Powerlifting-Second/dp/0971245088
For various reasons the strength and acrobatic team broke up the act and Ernie was on to better things then. Already possessing one of the finest physiques anywhere, he began heavily training with the Olympic lifts, still including the Press. It wasn't long and State records were being realized.
With the emerging of Powerlifting at the turn of the 60's . . .
http://ditillo2.blogspot.com/2009/12/powerlifting-how-it-all-started-peary.html
. . . Ernie was one of the first to organize meets and presentations to see that this new sport would catch the public's eye. This wasn't an easy period for the early powerlifters. The public just didn't seem to want to understand these fine men. In the early 60's Ernie won several Powerlifting contests and with these wins were most often Best Lifter awards.
Having a heavily muscled body, he decided to enter the Mr. USA in 1967. He almost took the title and many thought he was the winner but 2nd was announced over the loudspeaker system. Ernie took this decision with great pride and signaled to his fans, "the best is yet to come!" 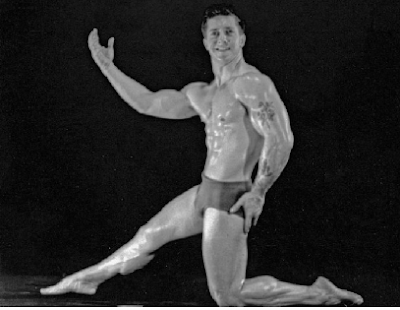 Being a police officer for many years he has always offered offenders an opportunity to become involved with weights. He states, "Many times you find that these young men are inwardly fine people and all they need is some direction in life's way; many, many times weightlifting is a positive thing for them." Ernie has been a Sergeant and Chief of Police. A Position he held for over five years until he came to the realization that his was to "political a job." His joy comes from seeing a smile and not a closed door.
After the Mr USA contest he was made some handsome offers to join the Weider boys and did venture out to the West Coast. There he became close friends with such men as Larry Scott and Franco Columbu. When I asked him of them he said, "At the time, Larry Scott was on top and had the best arms of any man alive.' However, he still feels that the best total physique he has ever seen was that of Jack Delinger. 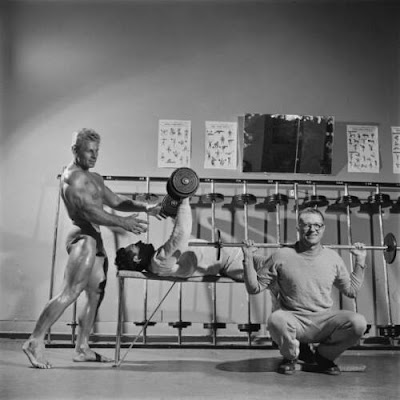 Jack Delinger in the trunks. Note wall charts and
the great look that squatter's got goin' on.
During the late 60's and early 70's Ernie continued to win many Powerlifting and physique contests and by now was highly recognized as one of the best in the world. His big day came at the 1974 World Championships when he totaled 1691 in the 181 class and won. Still having his tremendous physique,  he was challenged by a few of the competitors in the Mr. USA contest which was being held in conjunction with the lifting championship.
Many of them came to regret this because Ernie battled it down to the wire with Pat Neve who was finally given the win. Again, much to the disappointment of many of the fans who sided with Ernie. What a day! He had won the Worlds and placed second in the Mr. USA.
Offers from out West flocked his office in the weeks to come, however, he and his brother Vic had recently purchased a small health studio. Feeling settled down in Aurora, Illinois, he declined these offers and concentrated on establishing his own gym. 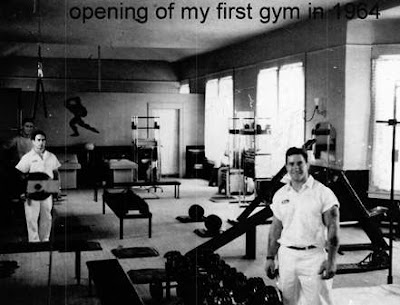 1975 was another fine year for Ernie as he went up to the 198 class and broke the World Record Total by lifting 1780. Then, in 1976, he went into competitive retirement to concentrate on business finances, and although he didn't compete he hosted many area and state contests. In this period of time Ernie was in fantastic shape and through the urging of some of his fellow training partners (including myself) he entered the Mr. Midwest contest in Niles, Illinois.
Let me say that at this time Ernie was in the best shape of his life! And a longtime friend of his who was recently crowned Mr. Olympia was the guest poser. This was none other than Franco Columbu. By now it's almost anticlimactic to tell you Ernie once again had bad luck and was placed 2nd. I was backstage with him after the contest along with Franco as they discussed what different ways life had taken them in the past few years since Ernie had left California. Both were in their posing briefs and extremely impressive.
Last year I got the honor of being Ernie's training partner. What an honor is has truly turned out to be! I have learned more about the Powerlifting game in one year than what most lifters will experience in a lifetime.
With the emerging of the 80's, it seems Ernie has held on to his word he gave his fans at the '67 Mr. USA . . . The best has yet to come has arrived! At the State Championships held in Chicago he won the 198 class with a super total of 1857. All Master World records were shattered. Immediately came offers for the London Cup and The World Series of Powerlifting. He went to the World Series in Auburn, Alabama, where he again posted a fine total of 1818. But I knew this was a down day for Ernie because he had totaled 1900 at our practice sessions and they were strict lifts. So again, it was back to the drawing board.
We worked each other out like men possessed, hitting max after max. That's when the news came of a Region 7 meet in Moline, Illinois. Ernie gave it great consideration and decided to enter. He gave it great consideration and decided to enter. His Father had passed recently passed away on Good Friday [there's a typo here in the original article - "Goof Friday" - about the worst damn one letter mistake you could let slip by] and I knew this was constantly on his mind.
What a perfect "Father's Day" it was! Ernie went 9 for 9, and the end result was a 1951 pound total via 722/451/778. It was good enough to tie with Walter Thomas for the greatest of any 198er ever.
Most recently Ernie ventured out to Madison, Wisconsin to lift in the 1980 Senior National Powerlifting Championships, nicknamed "Mad City" and that it was! Held on July 12th and 13th with some 1,350 people packed in a dark auditorium, the humidity held at 90+ percent and temperature reportedly 105 degrees. 78 lifters pitted against one another for America's finest lifting crown. Even with this disadvantage, there was some fantastic lifting done.
Ernie made his first two squats, however, an attempt at a PR 733 wouldn't quite go. In the bench he fired up 457 with ease only to have 473 on his third attempt falter. At this point he knew it would be between himself and Vince Anello if both their deadlifts went well. Vince's did, Ernie's didn't. He gave a valiant effort at the 776 that had given him the World record total at Moline but it would only come up to his knees before the grip gave out.